Haji vows to have 28 suspects arrested in dam scandal jailed 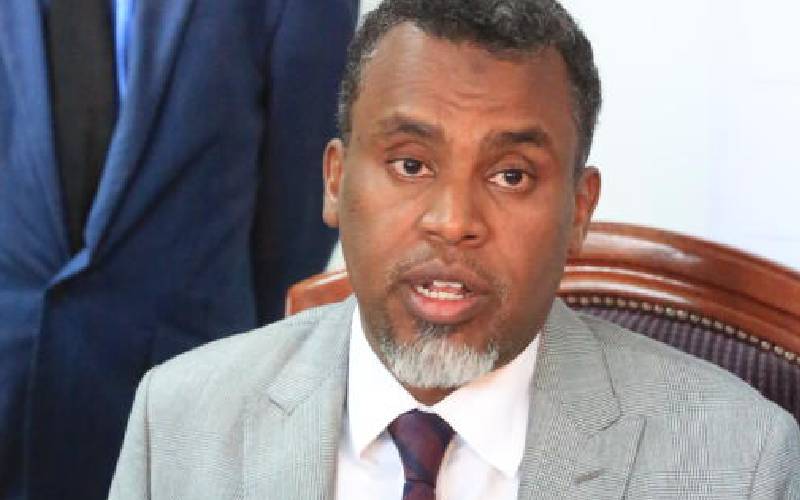 More than Sh19 billion was lost in the Arror and Kimwarer dam scandal in a well choreographed corruption syndicate orchestrated by officials in the National Treasury, the DPP says.

The Director of Public Prosecution Noordin Haji (pictured) announced this as he ordered the arrest of 28 suspects, including Treasury Cabinet Secretary Henry Rotich, at least two Principal Secretaries and top government officials in connection with the scandal.

“If the projects were carried in adherence to the law and existing policies for safeguarding public interest, then they should not have cost Sh63 billion. We have evidence to prove Sh19,714,366,991 was lost through a well choreographed scheme to defraud public funds,” said Haji at a press briefing in his office.

According to the DPP, scandal surrounding the two dams pass as one of the biggest corruption heist in recent times; one where government officials brazenly stole while disregarding laws relating to procurement, inflating the projects’ costs and paying billions of shillings for services not rendered.

What started in 2015 as a mega-project to change the lives of Elgeyo Marakwet County residents and parts of the North Rift turned out to be a cash cow where the initial cost of Sh46 billion was inflated to Sh63 billion.

Four years later, there is nothing to show for the billions of shillings sank into the project. A visit to the two sites show no sign that the Arror and Kimwarer dams are on course even after advance payments totaling Sh19.7 billion were disbursed by January 2019 as commitment fee, insurance and other costs.

According to the DPP, Sh11 billion was paid upfront for insurance while Treasury borrowed another Sh4.6 billion to pay interest in advance on the principle amount.

“You can imagine how painful it is to taxpayers to borrow money to pay interest. As a country, we are forced to pay interest on two loans which increased our debt to Sh4 trillion equivalent to 52 per cent  of our GDP. They blatantly ignored advice that our debt should not be above the limit of 50 per cent,” said Mr Haji.

Haji said a further Sh643 million was released by Treasury to compensate and resettle residents affected by the two dam projects. He, however, pointed out that there was no evidence that there was any land acquired after Kenya Forest Service(KFS) opposed excision of forest land to undertake the projects.

In addition, the Treasury officials committed to pay in euros while the contract was signed in US dollars which occasioned more losses through exchange rates.

National Environment Management Authority (Nema) boss Geoffrey Wahungu and two officials- David Ongare and Boniface Lengisho are also on the list of suspects. So is the Italian Company at the centre of the investigations, CMC Di Ravenna and its director, Paolo Porcelli.

A tough-taking Haji declared that it will not be an easy walk for the suspects as evidence collected so far is sufficient to nail them. He said his office is already tracing the proceeds from the project deal to ensure that any looted funds are returned to public coffers.

“Public corruption is a blatant abuse of power by persons in position of authority and it threatens the very fabric of our nation. Corrupt individuals put hardworking citizens at a disadvantage at times condemning them to loss of lives and they must pay for these crimes,” he said.

The DPP said the suspects will face charges of conspiracy to defraud, failure to comply with procurement rules, engaging in a project without prior planning, abuse of office, financial misconduct, neglect of official duties and fraudulent acquisition of public property.

He said investigations indicated that the Government officials flouted procurement rules when they decided to award the contract to CMC Di Ravenna while aware that the Italian firm was struggling and was under liquidation in Italy.

Haji wondered why KVDA decided to lock out other qualified companies which would have completed the project at a cheaper cost even after it was brought to their attention that the Italian firm had not completed three other projects.

The suspects are expected to be charged today.

By Grace Maina 16 hours ago
Shipping & Logistics
How to overcome shipping challenges
.