The beginning of what might be the end of a family empire begins tomorrow when the government starts the process of winding up Tuskys.

This is after home appliances and electronics dealer Hotpoint Appliances filed a petition to liquidate the troubled retailer with the official government receiver Mark Gakuru.

Gakuru is now expected to gazette the winding-up petition, possibly tomorrow, after which the courts will have the final say on whether to appoint a receiver-manager to take over the management of the supermarket chain.

Hotpoint Appliances is seeking to recover a Sh250 million debt from Tuskys even as several of the retailer’s stores continue to attract auctioneers.

The possible liquidation of Tuskys following Hotpoint’s move could open the floodgates for other creditors, whose liability is estimated at Sh6.2 billion.

It also casts doubt on the private credit arrangement that the cash-strapped retailer had with some of its creditors.

“If Tuskys is unable to pay, they will be put under receivership,” said a source close goings-on at the retailer. 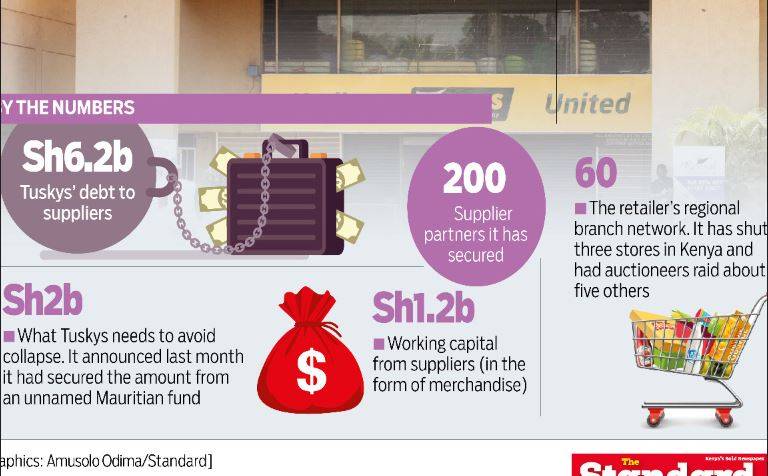 There are chances that Tuskys will not be immediately wound up as the courts have the option of appointing an administrator to run the company for a year with the aim of realising some assets for the creditors.

As Tuskys’ green-and-yellow logo that has for years welcomed shoppers to the retailer’s stores begins to slowly fade away, the shelves are being emptied by jittery creditors who fear losing all their money.

Yesterday, the management of Greenspan Mall said after Tuskys, their anchor tenant, started showing signs of distress earlier in the year, they came up with a payment plan.

“The payment plan has been dishonoured by the tenant,” said Greenspan Mall after it instructed Sannex Auctioneers to sell some of the items in the store to recover rent arrears.

Some of the items to be auctioned include electric and electronic appliances, which explains why Hotpoint wants Tuskys put under administration.

Late last month, the retail chain said it had signed an agreement with an unnamed Mauritius-based fund for Sh2 billion capital injection to help address its financial woes.

“This funding will help alleviate our current capital constraints impacted by Covid-19 and further reposition the business for increasing stakeholder’s value,” read a statement by Tuskys chair Bernard Kahianyu.

In the petition that Hotpoint had deposited with the High Court, the home appliances dealer said Tuskys is insolvent, unable to pay debts and should be wound up.

How a furniture manufacturer turned to home office furniture

How a furniture manufacturer turned to home office furniture

Chipper in money transfer deal with AS Roma

Chipper in money transfer deal with AS Roma

Foreign investors troop back to NSE

Foreign investors troop back to NSE