Rotichnomics: The mumbling money man that brought Kenya to the brink

It took 14 Finance ministers over a span of 50 years since independence to move Kenya’s total debt to Sh1.77 trillion by the time former President Mwai Kibaki left office in 2013. But in only five years, one Finance Cabinet Secretary Henry Rotich, borrowed a jaw-dropping Sh3.4 trillion, setting the stage for the current financial crisis that has seen The Treasury desperately go after poor Kenyans with punitive taxes. One misstep after another, and in quick succession, Rotich descended from the saint who took over the reigns of the country’s purse in 2013 to the stone-heart bureaucrat whose propensity to raid Kenyan’s pockets is unmatched. “He’ll go down in history as a the finance minister who accumulated the most massive public debt in the shortest time possible and to the pain of most Kenyans,” NASA co-principal and former finance minister Musalia Mudavadi told the Saturday Standard.

“I don’t think Rotich is aware of his responsibility as the manager of the country’s fiscal policy,” said Dr Samuel Nyandemo, an Economics lecturer at the University of Nairobi. 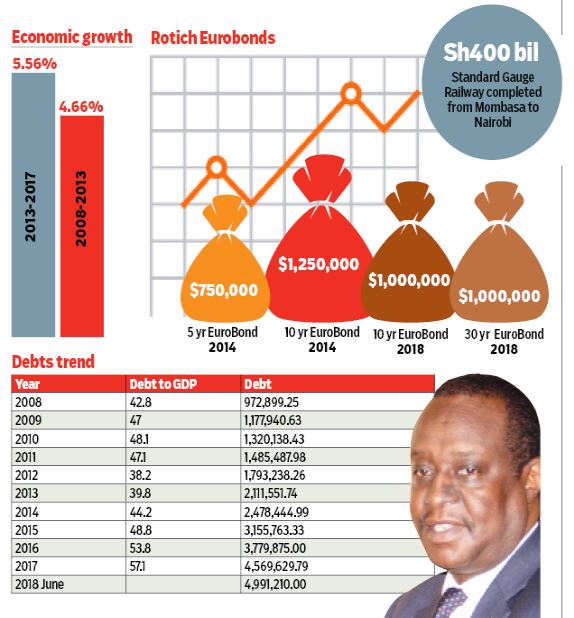 Yes-Man extraordinaire As the storm kicked off by the introduction of value-added tax (VAT) on petroleum products rages on, the lenses have been spectacularly turned on Rotich, the man President Uhuru Kenyatta entrusted with mobilising revenues and prudent spending, technically known as the fiscal policy. Of all the flaws and gaffes that have characterised his stay at the helm of The Treasury, Rotich’s biggest fault has been a lack of guts to point out to the King when he is naked.

In fact, Rotich’s policy has dangerously responded to the whims of both his bosses, President Uhuru Kenyatta and his deputy William Ruto whose affinity for grand, political projects such as the controversial Standard Gauge Railway (SGR) has seen the country’s debt level careen towards stratospheric and unsustainable levels. Not that there are any Cabinet Secretaries that can stand up to their bosses, but Rotich has been a Yes-Man extraordinaire. Unfortunately, this position needs its occupants to walk around with loads of guts.   Last year, the country’s silos ran out of cereals, putting President Kenyatta’s re-election bid at risk with murmurs of unga revolution catching on. Rotich, nudged by his boss’ expediency, flung open the country’s borders, allowing an unprecedented importation of maize, sugar and milk powder. In that simple gesture, he thrust the country into the labyrinthine abysses of sugar and maize scams which are deepening. Already, the maize scandal has claimed a few senior government officials. And with anger against Rotich slowly building up, an impeachment motion knocked on his doors, but he was saved by his bosses. Perhaps Rotich is the wrong man at the apex of the Exchequer at the wrong time. His rise to the top has been uncharacteristically sharp.

Before he came to head the ministry, Rotich was a little-known bureaucrat who headed the macroeconomics unit at the Ministry of Finance. He held this position from March 2006, serving under President Uhuru Kenyatta who was the Finance Minister and Deputy Prime Minster in the Grand Coalition Government. He surprisingly edged over his then senior, Dr Kamau Thugge, who was central in designing the current fiscal framework, including Devolution and the Public Finance Management Act in what was then seen as a balance of power within the ethnically power-brokered Jubilee Government. CS Rotich is soft spoken and mumbles his way out of uncomfortable questions. Insiders at Treasury say Dr Thugge still holds sway. There have been embarrassing instances at press conferences when Thugge has had to jump in to clarify or substantiate Rotich’s remarks. At some point this year, he said that the country was broke, kicking up a storm. He later back-tracked, claiming that he never said Kenya was broke. His ascendancy to the money seat offered him opportunity for long anticipated policy of scrapping tax exemptions on some 395 goods and 22 categories of services plus 416 supplies of goods and services. He would demonstrate to his boss, despite massive protests, that he could help Kenya Revenue Authority (KRA) rope in more taxes and give President Kenyatta the bravado to whip up sovereignty calls to Western lenders over his International Criminal Court (ICC) proceedings. It is this move that five years later has come back to hit Kenyan’s pockets, with some MPs accusing Rotich of misleading the House to apply the flat VAT on fuel with a promise that Kenya would be reaping from oil finds by the time the tax clocked. But his test came a year later when a $600 million syndicated loan million sourced from Citibank (London), Standard Bank (South Africa) and Standard Chartered Bank (London), by President Mwai Kibaki in June 2012 was nearing two-year maturity. Huge budget gaps The National Treasury changed the Public Finance Management (PFM) Act and went for a sovereign bond known as the Eurobond and spent Sh53 billion to pay syndicated loans from offshore special accounts, contrary to the requirements of the PFM Act. This was the genesis of his first major scandal as the move muddied the paper trail and set stage for accusations that Sh100 billion was lost in the process. Another Rotichnomics that did not quite work out was the promise that with the Eurobond, interest rates would come down since the government would have deserted domestic borrowing, forcing banks to lower rates to borrowers. On the contrary, just a year after Kenya went to the international markets, the rates had actually gone up and by September 2015, lending rates to the government were as high as 22 per cent. To poor Kenyans, the rates soared above 25 per cent. Rotich was running huge budget gaps that still required him to borrow heavily locally and internationally, even when CBK Governor Patrick Njoroge was working to stabilise a devaluing shilling by tightening monetary policy. Dr Njoroge jokingly referred to the Rotich’s expansionary budget and growing imports pressures as “speeding up a car when he was trying to slow it down”. “It’s like we have one arm firmly on the brakes and the other firmly on the accelerator,” he said. In 2014, the government approached Parliament to increase the external borrowing ceiling by Sh1.3 trillion to Sh2.5 trillion and pushed up the total debt to Sh2.4 trillion. They would have had to do this every year, but the new Government had other plans. Rotich changed the law so that The Treasury would measure debt as a percentage of GDP and let Parliament pass budgets focusing on their perks rather than the gap between revenues and spending. “We progressively moved away from that to the best practice where the ceiling is a proportion of the size of the GDP. Rather than every year coming to Parliament to raise the ceiling, we just look at the GDP and raise,” he said. He has stoked animosity with the Central Bank over regulation of financial sector by creating a new watchdog under the Financial Conducts Bill, the level of borrowing as well as a new move to borrow through private placement as he continues blundering into the debt crisis that is sure to sink the Kenyan economy. James Gichuru, Kibaki, Arthur Magugu, George Saitoti, Musalia Mudavadi, Simeon Nyachae, Francis Masakhalia, Chris Okemo, Chris Obure, David Mwiraria, Amos Kimunya, John Michuki, Uhuru Kenyatta and Njeru Githae never pushed the envelope that far. [email protected]