It’s an Oscar for story on Zimbabwean

When the preview of the Oscar-winning short-documentary was shown during the awards ceremony, there was loud silence in the room.

Few people could believe something positive could come out of Zimbabwe. But the powerful voice of the woman featured in the documentary Music by Prudence proved many wrong.

The documentary tells the story of Prudence Mabhena’s struggle to rise above a world of hatred and superstition to realise her potential through music and love.

Her powerful voice resonates through the music hall, delivering an unlikely message of hope.

Her voice is stirring, but also still, in contrast to the rushing sky. It’s the voice of a leader, someone in a place of power and wisdom and uncommon peace. Then into the picture rolls its owner: a young African woman in a wheelchair. Her arms are twisted and useless. Without legs, she has never walked. The source of this commanding, compelling music is a head and a torso, and not much more.

Born in the idyllic town of Victoria Falls – one of the seven natural wonders of the world --– Prudence had a different fate. Her parents , a handsome tour guide and the village beauty had been picture-perfect newlyweds. When Prudence was born, it was clear something wasn’t right. Her arms and legs were severely twisted, stunted, and useless. Prudence’s paternal grandmother directed her daughter to refrain from breastfeeding –– kill the baby. Prudence’s mother disobeyed, and was ostracised and cast out.

Prudence lives in Bulawayo, and for a long time almost no one knew about that hauntingly beautiful voice. No one knew the strong, resilient woman that owned it. They were unable to overlook her body: crippled and deformed with a debilitating condition called arthrogryphosis.

When Prudence was born, her paternal grandmother wanted her dead. In Zimbabwe, disabled children are believed to be the result of witchcraft. In extreme cases, families kill them—to remove the "curse" from their family.

Prudence’s mother kept her and fed her. Cast out of her husband’s –prudence’s father’s – home, she brought the baby to her own mother’s rural home. Four years later, she left.

Music by Prudence traces the path of this little girl, and her remarkable transcendence from a world of hatred and superstition into one of music, love, and possibility.

Prudence was raised by her maternal grandmother Rachel Ncube who taught her to sing.

A working farmer, she would strap the little girl to her back as she worked the fields. But when Prudence turned Seven, she knew she couldn’t school her. So she sent her to live with her father and his new family.

There, Prudence fell prey to neglect and isolation. Her stepmother refused to touch her, and called her a worthless, helpless ‘ant’. For two years, Prudence lived like an animal – crawling on the floor and sleeping in her own urine, and worse. Every day, she dragged herself to a mango tree in the backyard, and told herself that her nightmare will end someday. She was despondent enough to attempt suicide – twice.

Luckily, she got a chance to attend King George VI School and Centre for Children with Physical Disabilities (KG6), which is mostly privately funded. She also got a wheelchair to enable her move around easily. With the wheelchair and a will to change her lie, she begun singing in earnest.

The school administrators encouraged her to join the choir. Her powerful voice won hearts and she was made the choir’s leader. She also joined Inkonjane, an a capella group.

After a while, Prudence and some fellow musicians started an Afro-fusion band called Liyana – it’s raining in Ndebele. All eight members are disabled.

They rehearse together, joke and laugh, and collaborate to write new songs.

Prudence teaches at KG6. She collects a salary, room, and board. Despite her disabilities, she is one of Zimbabwe’s rare, employed citizens. She speaks in a soft voice with a British lilt – spiked with jokes and playfulness and spirit. She is transformed.

The movie’s final scene is a concert by Liyana. The crowd applauds and whistles, then the screen darkens, leaving only Prudence’s lustrous, smiling face. Recalling the opening sequence, her face is in perfect symmetry to the African sky, rushing and streaming towards hope.

The group has just finished touring the US and their multi-city tour included more than 20 performances in California and the New York metro area, including the New Jersey Performing Arts Center in Newark.

The band’s started its US tour during President Barack Obama’s inauguration. The say it was a source of inspiration for a new song "Obama."

Liyana is also the subject of a new documentary, iThemba –– My Hope –– which is scheduled to be released worldwide later this year. The band’s singers perform in seven languages –– Shona, Ndebele, English, Dutch, German, Hebrew, and Spanish –– allowing them to reach a wider audience.

"We want to leave a message to everyone in the world that no matter what circumstance you are in, you can make it," singer Marvelous Meulo said.

In a great irony, Prudence’s stepmother suffered a stroke and is now paralysed. She uses Prudence’s former wheelchair.

Prudence weighs no more than 22kgs. But the sound that pours out of her is rich enough to fill a stadium, and it is haunting.

Typically, people with her disability do not live long. But so far, Prudence has been healthy, and hopes for a thriving career. Prudence finds strength in her adopted family: the members of her band. Having been similarly rejected by their families and their culture, they all share a similar trauma.

The documentary is directed and produced by American filmmaker Roger Ross Williams.

By Thompson Reuters Foundation | 17 minutes ago 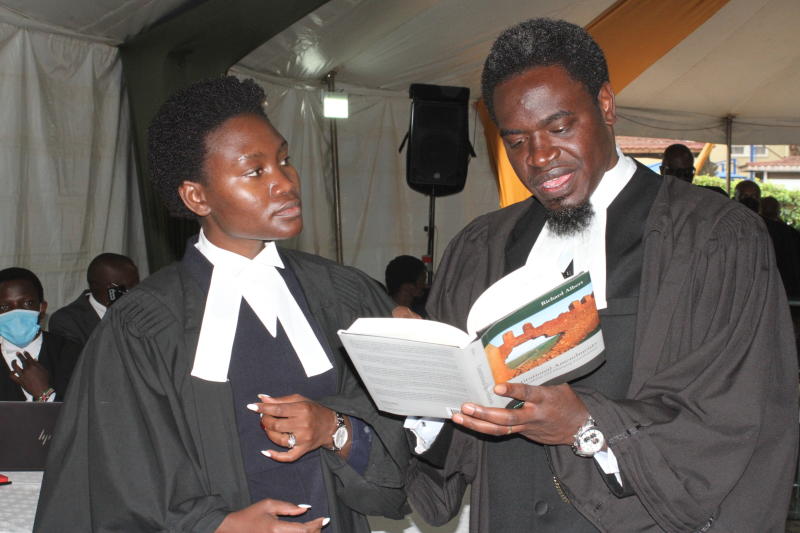 By Kamau Muthoni and Paul Ogemba | 47 minutes ago

Egypt scrape past Sudan to advance at Cup of Nations