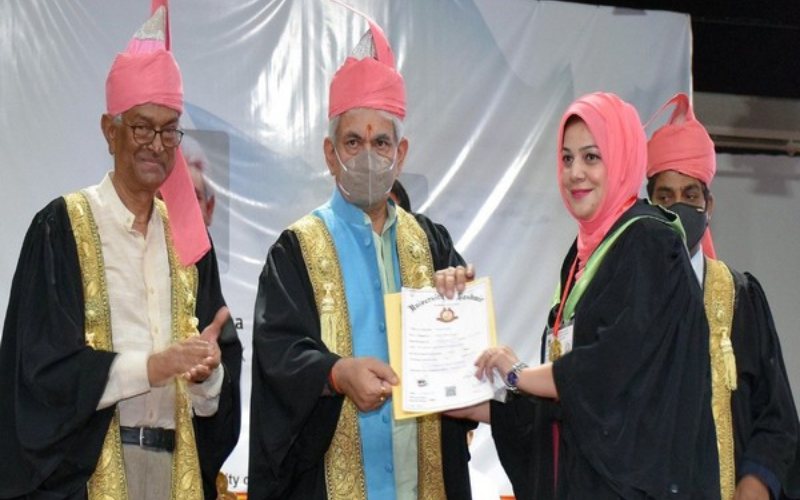 India: Jammu and Kashmir Lieutenant Governor Manoj Sinha said at a special convocation of the University of Kashmir on Wednesday that he is proud of girl students achieving maximum gold medals (academic).

“For this amazing performance, I congratulate all the girl students of the university,” said the L-G who was the chief guest of the convocation ceremony.

He also said that he has never read about gender discrimination in Jammu and Kashmir’s literature.
“Our country has built a vibrant democracy, a modern economy, in which the most important change is to make women socially and economically strong,” Sinha said.

He also said, “Whatever you learned here, it will make India reach newer heights. But I don’t think learning is a never-ending process. The Central government, Jammu and Kashmir administration and officials of the Kashmir University are making all efforts to make the modern education system.”

The L-G also said that the educational institutions need to focus on re-skilling, up-skilling, and new-skilling to make the young generation future-ready.

This is the 19th annual convocation 2021 of the university. This is the first time in eight years, since September 2012, the University of Kashmir is conducting its annual convocation. All the registered students who have been declared qualified for the award of PhD, M.Phil, MD/MS Diploma in Anesthesiology/Ophthalmology and Gynecology were given degrees at the convocation. Besides, all the meritorious candidates were presented gold, silver medals and cash prizes.

Explainer: What we know about Japan's contaminated Moderna COVID-19 vaccines

By Reuters and Winfrey Owino | 3 days ago