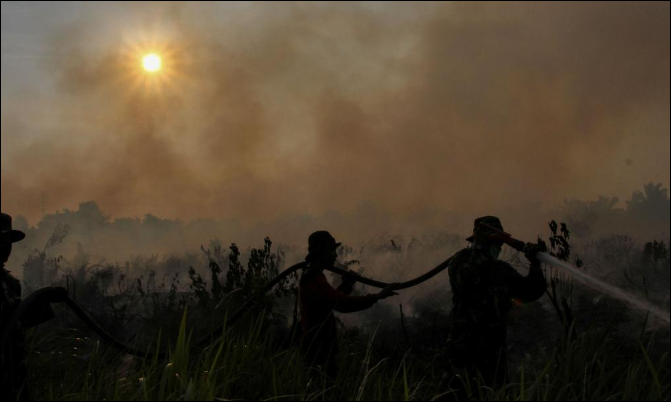 Indonesian President Joko Widodo threatened on Tuesday to sack military and police officers fighting forest fires if they fail to extinguish the flames. He also promised government funds for high-tech equipment like drones to help tackle the blazes. The Southeast Asian country has deployed thousands of military and police to douse forest fires after declaring an emergency in six provinces on the island of Sumatra and in the province of Kalimantan on Borneo. “I phoned the military commander and the chief of police to tell them to replace those who can’t resolve forest and land fires,” Widodo told a co-ordinating meeting on tackling forest fires at the presidential palace.

“Never underestimate hot spots. Immediately put out a small fire, don’t wait until it gets bigger,” Widodo said. Indonesian farmers use fire to clear land during the dry season but they can rage out of control and produce a choking haze that spreads to neighbors such as Singapore and Malaysia. Indonesia has recorded the highest number of hot spots this year since devastating fires in 2015 and faces global pressure to put an end to slash-and-burn clearance of land, often to plant palm and pulp plantations. The president, who will make an official visit to Malaysia and Singapore this week, noted complaints about haze were once again making headlines in neighboring countries. Malaysian authorities last week issued advisories warning the public to avoid open burning and outdoor activities, after forest fires broke out in Indonesia.

On Monday, Malaysia’s environment ministry said in a statement it would call on the Association of Southeast Asian Nations (ASEAN) to take measures to prevent transboundary haze when five Southeast Asian countries meet in Brunei this week. Indonesia has detected 975 hot spots so far this year, with 135,000 hectares of land burned across 18 provinces, said Indonesia’s Chief Security Minister Wiranto, who attended the meeting. President Widodo said that hot spots should be detected using modern equipment like drones. “If (the regional government budget) can’t afford it, I’ll buy it for you,” said Widodo. Indonesian authorities have pledged to use aircraft for water bombing and cloud seeding to fight the fires.

Drought has hit large parts of the archipelago as a mild El Nino weather pattern disrupts the dry season, weather officials say, with its peak now expected to run from mid-August to mid-September. This month, Indonesia’s Supreme Court upheld a judgment against Widodo, cabinet ministers and provincial governors that attributed blame over their handling of the 2015 fires.

More than 170 dead in Yemen floods

More than 170 dead in Yemen floods