A celebration of victory against chains of slavery 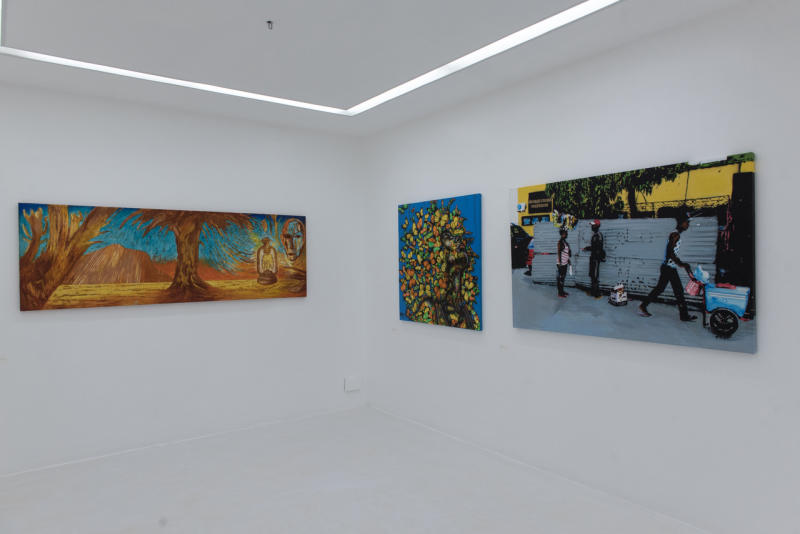 A contemporary art exhibition on the theme of slavery and identity has opened at Circle Art Gallery in Nairobi. Atlantico is a group show from 11 Angolan artists and one São Tomé and Príncipe artist exploring these themes to shape positive narratives about the two countries.

A story is told of a man who, after breaking free, fought his slave masters and freed his country. Correntes de Oura (Golden chains) by Kwame Sousa is a painting of a man with a broken chain around his neck. The edge of the piece is decorated with flowers to portray a celebration of victory against slavery.

In Sinais Himba (Himba signs), Kwame expresses beauty of the Angolan culture by painting a group of young men and women adorned in traditional necklaces and clothes. The artist’s desire to speak about Angolan history and culture is evidently seen in his previous and current shows.

Soba (chief), by Francisco Vidal is an abstract painting of a man's head and behind it are cotton flowers, touching on memory and slavery. Francisco urges Africans to redeem themselves and take caution not to end up in slavery again.

The show’s art curator, Dominick Tanner explains this interest in identity is due to Angola’s assimilation to the Portuguese culture in the colonial era.

“Angola is a very western country. It has remained similar to Portugal to date. Angolans do not speak traditional languages and they have lost some of their ethnic elements. We are much looking for identity. Art is uplifting and bring new narratives to the country,” says Dominick.

Dominick, a producer-curator and gallery owner living in Angola, said that an invitation from Circle Art Gallery's director and curator Danda Jaroljmek to exhibit in the space was a great opportunity to share works of both the young and experienced artists from Angola.

“When Danda invited us to bring new variety of artists, I saw this as a chance to select some of the works to showcase here,” says Dominick. The exhibition is open at the gallery until February 21.

More than 4,000 households in the region were said to be affected by end of last year