From Kilimani to socialites, our new man at money maker risks abduction 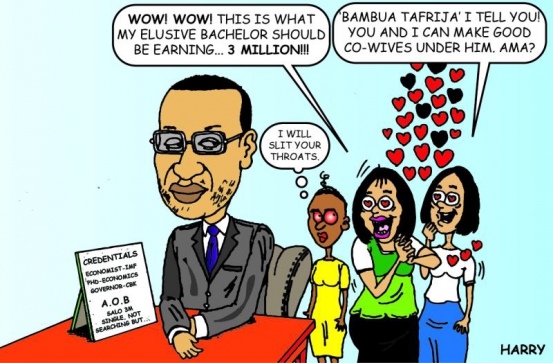 NAIROBI: This Central Bank Governor designate Pato must be one of a man; the dawa we require so bad especially at a time when the shilling is losing to the dollar.

Actually halfway into his term, we might take to the streets chanting “Man Pato for president”. We can do with a governor who debunked myths for a change. Since he confirmed to MPs that he indeed was not married at 54, we shall no longer have to endure the lie behind every successful man is a woman.

So all those women idling behind men who look as though they will succeed so that they steal the limelight hapa wamekula hu! MPs who keep a long list of mistresses were shocked to hear of an African man with no wife.

I hear a joker among the honourables wanted to know who eats man Pato’s money but the question was struck off the Hansard. Another MP seriously asked: “For whom then will you steal CBK money kama huna bibi?” The man was ruled out of order.

We must ‘green’ our banking sector to survive climate change crisis

However, after that interesting phase, MPs finally came to their senses and focused on the man’s professional abilities.

Hata Botswana’s President ni bachelor and has been named a Ndebele elder many times over.

As if all that hullabaloo was not enough, other organisations joined. It is not because the daktari is the first unattached male in the republic, it is just that most Kenyans wonder what the man does with his fat paycheck.

You see, with little imagination, even a fake Kawangware househelp will tell you that the CEO of Central Bank of Kenya mints loads and loads of Kenya-shilling notes every month.

Reliable sources intimate that Kilimani mamas ran a thread on fesbuk to discuss this abomination.

Members were encouraged to submit hypothesis on how such an eligible husband escaped the wiles and guiles of women all over the country.

“Was he raised in a seminary before joining a boy’s boarding school where he has been for fote fae years?” the admin stimulated the discussion.

“Maybe we should revert back to feminine as feminist is scaring away cute men. #runawaygroom,” a sober member observed.

As this was going down, a notorious tribal council convened a meeting to discuss why women from their tribe were sleeping on the job.

“If we hand over this man, Central Bank would be ours by virtue of our new position as the Governor’s in-laws,” the chair noted. Another member moaned all the jobs school dropouts from the clan missed at Central Bank.

A footballing community whose team is in the doldrums noted that their team would have done with the monetary giant’s sponsorship.

However, the hardest hit were the socialites; an amorphous group that likes to imagine rivers overflow whenever their fundamentos shiver.

This particular group was shell shocked and the news caused some of them to cancel their flights to Dubai where they were going to spend an Arabian night weekend.

“Is it possible? How can this happen? How come I never noticed this celeb before?” a socialite wondered aloud.

Lists of friends on Facebook, Whatsapp and Instagram were refreshed but the CBK dude was a no show. The net was scoured for any bit of info on the man before he was promptly added to existing broadcast lineup.

A journalist who hardly ever gets published took the trouble to ask a certain Dr Frank, a shrink who has studied female reactions. He confirmed women actually feel challenged when a man of means snub them.

“They start doubting themselves and feeling inadequate,” he said.

With mercenaries out to kidnap the CBK Governor, the government should do everything to ensure the man is kept safe. He may just be the man we need at the helm of CBK.