By Nzau Musau and Allan Mungai | 4mos ago

Eager to get down to the business of fulfilling electoral promises, President William Ruto is putting final touches on the Cabinet that will play a crucial role in his administration.

In an unprecedented move, Dr Ruto began implementing Executive decisions right at Kasarani Stadium on Tuesday, minutes after he took his oath of office, signifying the urgency of the business at hand.

But the more the call to duty urged him on, the more it became increasingly clear he needs his Cabinet, and government for that matter, to implement his manifesto.

Granted, he can rely on the current Cabinet to implement immediate decisions- like he already has worked with Treasury Cabinet Secretary Ukur Yatani on the police budget - he must wait longer for Parliament to approve his choices whenever he names them.

Since Tuesday, a lot of attention has gone into those captured in official pictures close to him.

On the night he was sworn in he appointed Court of Appeal judges.

In the picture shared by his office, Ruto was flanked by his deputy Rigathi Gachagua, former Budalang’i MP Ababu Namwamba and former Cabinet Secretary Davis Chirchir.

While Chirchir is currently serving as Ruto’s Chief of Staff and Namwamba as advisor on international relations, the two are among leaders waiting in the wings for formal appointment to the new administration.

Chirchir was appointed Cabinet Secretary for Energy and Petroleum by President Uhuru Kenyatta in 2013 but was suspended and later sacked alongside three other Cabinet secretaries.

In March, Ruto appointed Chirchir as Chief of Staff in the Office of the Deputy President following the death of Ken Osinde.

Chirchir is being mentioned as a possible pick for Secretary to the Cabinet and Head of Public Service, a function currently held by Joseph Kinyua.

Namwamba by virtue of his predisposition to international relations docket is slated for Foreign Affairs Ministry, currently headed by Raychelle Omamo.

In that picture also was Korir Sing’oei, a lawyer who served as Legal Advisor at the Executive Office of the Deputy President.

He had played a prominent role on Ruto’s side during the International Criminal Court (ICC) trials but disappeared in the background when the fight between Ruto and retired President Uhuru Kenyatta gathered pace.

On that evening, Sing’oei was the one pointing to the president where to sign, a role that would have ordinarily been reserved for Attorney General Kihara Kariuki or Solicitor General Ken Ogeto. He was also the Master of Ceremonies the following morning as Ruto swore in the new judges.

Between Sing’oei and Jasper Mbiuki - yet another legal brain in Ruto’s previous office - one of them is likely to be picked for the Solicitor General position.

But the bigger job in sight for them and a few others is filling the position of Attorney General (AG). Kariuki was appointed in 2018 by Uhuru following the departure of Prof Githu Muigai, and has reportedly come to terms with his fate.

Former Mandera Central MP, Senior Counsel Abdikadir Mohamed, is said to be angling for this position. He played a key role in defending Ruto’s win in the presidential petition at the Supreme Court.

Abdikadir was the legal advisor in the Executive Office of the President, in Kenyatta’s first term. He chaired the Parliamentary Select Committee (PSC) which processed the current Constitution in 2010, and in which Ruto was an ordinary member.

The place of Amani National Congress (ANC) leader as the Chief Minister is not in question, on account of a campaign promise made to him. He may also nominate one or two CS’s based on his performance as evaluated by Ruto.

Another person is former Tharaka Nithi Senator Kithure Kindiki who was overlooked in favour of Gachagua as Ruto’s running mate.

Prof Kindiki has been a constant feature on Ruto’s side since the ICC trials where he represented him. A former Deputy Speaker of the Senate before he was purged out during the famous Jubilee party “fumigation” exercise, Kindiki was prevailed upon to drop his Tharaka Nithi senatorial bid for bigger things in Nairobi.

Maendeleo Chap Chap leader Alfred Mutua is a Kenya Kwanza coalition principal in his own right. His Ukambani region delivered a quarter of their votes to Ruto’s side, making him a choice pick to represent the region.

He also fits Ruto’s ambitions of politically burying Wiper leader Kalonzo Musyoka, unless he agrees to play ball. Another regional leader waiting on Mutua’s side is former Makueni Governor Prof Kivutha Kibwana who is being considered for the Devolution docket.

Ruto has a tall order in achieving his 50:50 gender promise. Kandara MP Alice Wahome leads the legion of Kenya Kwanza women luminaries angling for prime Cabinet slots. She had been one of the Central women leaders tipped for the DP position before the men took it away.

Current Lands CS Farida Karoney may be one of the two current CSs who may survive the chop, the other being Labour CS Simon Chelugui. It is however inevitable that she will retain the Lands docket which is up for grabs by one of the ladies.

Karoney, a media practitioner of many years standing was able to keep her head abo the water when Jubilee imploded. She oversaw massive reforms in the Lands docket, attracting the least controversy and keeping off the politics.

The stars appear aligned for Esther Koimett, the current Communications Principal Secretary. An experienced public administrator, Koimett is said to be considered for a prime Cabinet slot to accord the administration not just her skills but also administrative continuity.

Three other PSs could be promoted in the anticipated changes. Belio Kipsang (Education) has come a long way with Ruto, having worked as CEO of Coffee Development Fund and Deputy CEO of HELB, dockets which were in Ruto’s ministries in previous governments.

Then there is Dr Chris Kiptoo (Trade) who brought with him to government collective experience of working for the International Monetary Fund (IMF), Central Bank of Kenya, National Cereals and Produce Board (NCPB) and in the Office of the Prime Minister in Grand Coalition Government.

And finally of the PSs. There is Julius Korir (Devolution), who directed county governments to cease spending on media space to congratulate the new president on his election.

Former Speaker of the National Assembly Justin Muturi is equally a Kenya Kwanza principal on account of his profile and party. Muturi expects nothing less a prime Cabinet slot that can match his profile.

Elgeyo Marakwet Senator Kipchumba Murkomen is another diehard Ruto loyalist who may have to leave his Senate post for the Cabinet. Another member of this close-knit circle is Garissa Township MP Aden Duale. 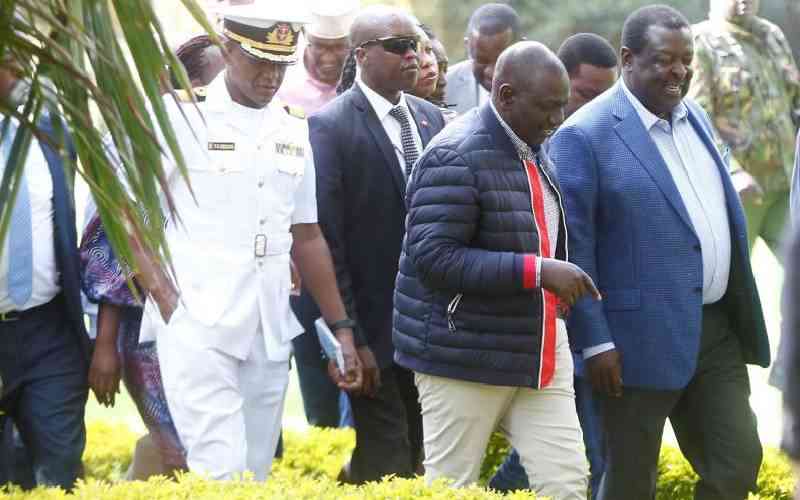 Salman Rushdie gives first interview since 2022 stabbing
News
By AP
12 mins ago
Can you predict your date of death?
Health
By Dr Alfred Murage
19 mins ago
The Grammys ended in controversy, again. Here's what to know
News
By AP
30 mins ago
The seven secrets of success
Living
By Bishop David Muriithi
34 mins ago
.