Will UDA survive curse of ruling parties that weaken and wither?

By Kennedy Gachuhi | 4mos ago

As President-elect Dr William Ruto and his deputy-designate Rigathi Gachagua take oaths of office on Tuesday, attention will shift to the future of his party, the United Democratic Alliance (UDA).

History written in the last two decades, ruling political parties have experienced turbulence that has forced even the past presidents to ditch them for new outfits while seeking reelection.

UDA was formed in December 2020 by renaming and rebranding the Party of Development and Reforms (PDR). It participated in the August 9 General Election for the first time.

In the polls, the party posted stellar performance capturing a near majority of elective seats in Parliament, governorship and the tightly contested presidency. It also took control of county assemblies in its strongholds.

How UDA, as part of Kenya Kwanza Alliance, managed victory in the presidential election is, however, not unique to the party if the success of other parties formed in the lead-up to previous general elections is anything to go by.

In 2002, the late former President Mwai Kibaki was propelled to power by the National Rainbow Coalition (Narc).

Just like UDA, the coalition party was founded months to the polls by, among others, Mr Kibaki, Charity Ngilu, Raila Odinga, Kijana Wamalwa and Kalonzo Musyoka. They coalesced around the National Alliance Party of Kenya (NAK) and Liberal Democratic Party (LDP)

Despite being new, Mr Kibaki managed 62 per cent of the votes against independence party KANU’s Uhuru Kenyatta who got 31 per cent.

It was, however, not long before the curse of division in a ruling party drove its wedge among its founder members ahead of the 2005 constitutional referendum.

Kibaki’s wing of the coalition party which was in support of the referendum lost at the ballot to Raila’s faction who joined hands with Uhuru and KANU and led a successful ‘No’ campaign.

Although Narc-K was set to sponsor Kibaki for his second term in office in the 2007  elections, he ditched it to form the Party of National Unity (PNU).

Narc and Narc-K party consequently lost their mojo in the country’s politics and have since been capturing not more than ten elective seats in every subsequent general election.

PNU had Kanu, Ford Kenya, Ford People and Democratic Party, among others, as its affiliate parties and successfully campaigned for Kibaki’s re-election though the win was contested by Raila.

With Kibaki retiring in 2013, PNU’s popularity took a nosedive. Its chair and the then Interior Security minister George Saitoti, who had presidential ambitions, died in a June 2012 plane crash.

New kid on the block

In the run-up to the 2013 elections, the Jubilee Coalition, comprising of Uhuru’s The National Alliance (TNA) and Ruto’s United Republican Party (URP) became the new kid on the block. TNA was formed following the rebranding of NAPK, which had bounced back in 2008 as an independent party. Its popularity on an upward trajectory after clinching various parliamentary and county council seats during a series of by-elections in 2012.

On the other hand, URP was founded by former Energy Cabinet Secretary Charles Keter with Dr Ruto as its party leader.

Riding on their support from Kenyans in the fight against cases they were facing at the International Criminal Court (ICC) over the 2007/08 post-election violence, Uhuru and Ruto were elected as President and Deputy President respectively in 2013.

Just like Narc and PNU, the two parties did not survive for long after the duo agreed to dissolve them and form ‘a party with a national outlook’ in September 2016 alongside 10 other small parties.

“Jubilee Party is an expression of our unity, our oneness and togetherness. We renew and strengthen the ties that bring Kenyans together,” said Uhuru.

“This coming together of Kenyan communities, people from all walks of life would have not been possible without the foresight and wisdom of our leader Uhuru Kenyatta,” said Ruto during the launch.

In 2017, Jubilee campaigned on the promise to unite Kenyans who had for years witnessed deep political divisions along tribal lines.

Trouble in the party began after President Uhuru built bridges with Raila in March 2018 a move that left Dr Ruto and his allies aggrieved.

Infighting rocked the Jubilee Party as Uhuru’s faction and Raila’s allies embarked on elbowing out Ruto’s allies from executive and legislature positions.

It metamorphosed into Hustler Centre, which became the UDA headquarters along Ngong Road.

Isaac Kahacho, a political analyst, says that UDA’s survival as a party beyond one election cycle is dependent on the leadership it will have under Ruto.

“Other parties have failed to survive due to poor leadership and lack of a consistent face like is the case for ODM where Raila has maintained firm grip of the party and its leadership,” said Kahacho.

According to him, UDA has high chance of surviving on its own without being dissolved into a coalition party.

“During the campaigns, Ruto was more inclined and categorical towards the success of UDA as a party. The party’s survival will, however, hang on the balance once Ruto exits active politics,” said Kahacho.

Gitile Naituli, a professor of management and leadership at Multimedia University, says UDA’s survival will be pegged on the success of the government its members will form.

“UDA has a strong ideology, unlike other previous ruling parties which were mere political vehicles. If the new government fulfils its promises, it has chances of outliving its founders,” said Naituli.

On his part, Dr Philip Chebunet says Ruto’s style of politics is likely to see it survive beyond 2027.

“Ruto has cut his political image as a man of his word which is key to the survival of the party. They should stick to their manifesto for the country and not personality cultism. Hopefully, they have learnt from the fall of Jubilee Party,” said Chebunet. 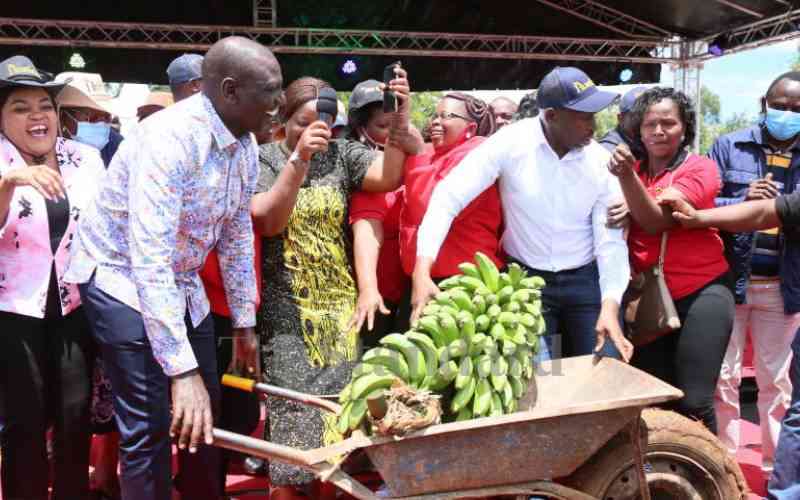 Premium Analysis: This is William Ruto's headache
Politics
By Dennis Kabaara
4 months ago

Ruto: My Cabinet members will answer questions in Parliament
National
By Chris Hart
5 months ago

Premium President-elect: How Ruto made it to the top
National
By Peter Theuri
5 months ago
.

Premium Jobless Kenyan graduates troop to Finland to do technical courses
Education
By Stephen Rutto
25 mins ago
Mining firm sponsors 24 youths to acquire vital technical skills
Education
By Philip Mwakio
1 hr ago
Let clergy advance Pope Francis agenda and take it up with Ruto
Opinion
By Gabriel Dolan
1 hr ago
Why it's time for youth-led rural resurgence
Opinion
By Mark Oloo
1 hr ago
.

By Ken Opalo 1 hr ago
Premium We can't tax our way out of the economic slump
.