By Diana Anyango | 1mo ago 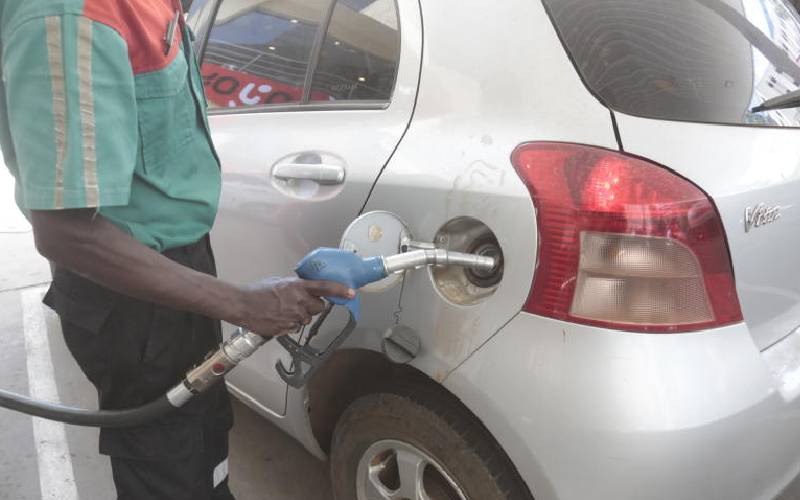 The government will pump more money into the fuel subsidy over the next 30 days to keep the cost of fuel unchanged.

The move will save consumers from spending over Sh200 per litre on the three petroleum products, including super petrol whose price would have shot up to Sh214 per litre without the subsidy.

The Energy and Petroleum Regulatory Authority (Epra), in the price capping guide for August to September said pump prices for super petrol, diesel and kerosene would remain at the same levels as over the last month.

The State, he said has been forced to further stretch its finances by increasing its spending on the subsidy. The State will spend the highest on kerosene at a subsidy of Sh74 per.

The fuel, largely used by poor households for lighting and cooking, will continue retailing at Sh127.94 per litre in Nairobi.

Without the subsidy, it would have retailed at Sh202.11. The subsidy over the August to September cycle is compared to Sh54 subsidy per litre over the last cycle.

Super petrol will retail at Sh159.12 per litre in the capital, with the government subsidising it at Sh54.91 per litre. This is also higher than the Sh50 per litre that was the subsidy for petrol over the July to August cycle. Without the subsidy, motorists would have paid Sh214.03 per litre of super petrol.

Diesel will continue retailing at Sh140 per litre, benefiting from a subsidy of Sh66.17 per litre, also higher than Sh54 which was the subsidy over the last cycle.

Without the subsidy, diesel would have retailed at Sh201.17 per litre in Nairobi. The fuel, which is essential and powers key sectors such as transport, has also received a much higher subsidy this month.

“The applicable prices for this cycle have been maintained as the ones applicable in the immediate previous cycle. The government will utilise the Petroleum Development levy to cushion consumers from the otherwise higher prices,” said Epra in a statement yesterday.

Previously, disclosures by the Petroleum Ministry have shown that spending on the subsidy has over some months been in excess of Sh15 billion. The industry regulator said there has been an increase in the cost of crude oil globally. Locally, the shilling continued its losing streak, further weakening against the US dollar over the month of July.

This in turn led to an increase in the average landed cost, which is the cost of fuel when it lands in Kenya before costs such as taxes, inland transport and marketers’ margins.

According to Epra, landed cost increased 2.99 per cent per cubic metre of super petrol, 8.22 per cent for diesel while the landed cost for kerosene registered the largest increase of 14.92 per cent.

“Over the same period, the mean monthly US dollar to Kenya shilling exchange rate depreciated by 1.17 per cent from Sh118.53 per US dollar in June 2022 to Sh119.92 per dollar in July 2022.” The State has been subsidising motorists from the high cost of fuel since April last year.

It has spent more than Sh101 billion in a scheme where it pays the oil marketing companies to stabilise pump prices.  Last month, the State authorised the use of an additional Sh16.68 billion for fuel subsidy.

Last month, President Uhuru Kenyatta authorised the use of an additional Sh16.68 billion for fuel subsidy, which again kept fuel prices unchanged but was largely seen as a pitch for Raila Odinga the Azimio la Umoja presidential candidate in the just concluded polls.

While the fuel subsidy has enabled Kenyans to save more than Sh100 billion that they would have spent on fuel, making life more bearable during the harsh times, it faces an uncertain future. The government has often said it is short of funds to continue with the subsidy programme, with the collections from the PDL being inadequate to fund the programme.

The International Monetary Fund (IMF) has also been pushing for its scrapping. In a July report, the institution said National Treasury had agreed to do away with the programme and would be slowly pulling out and allowing local prices to reflect the market realities such as the high crude oil cost and weak shilling.

This would mean that Kenyans pay more than Sh200 per litre across the three products.

Premium Court: Mithika Linturi was in a Catholic union, could not marry Kitany
National
By Kamau Muthoni
8 mins ago
Families mourn death of officers killed by bandits
Central
By Timothy Kariuki
19 mins ago
Inflation hits record 10 in 19 EU countries using euro
Business
By AP
25 mins ago
'Plate of omena' is now a luxury meal for residents
Nyanza
By Isaiah Gwengi
29 mins ago
.

By Kamau Muthoni 8 mins ago
Premium Court: Mithika Linturi was in a Catholic union, could not marry Kitany