Worry not Gitegi, polls will be rigged fairly 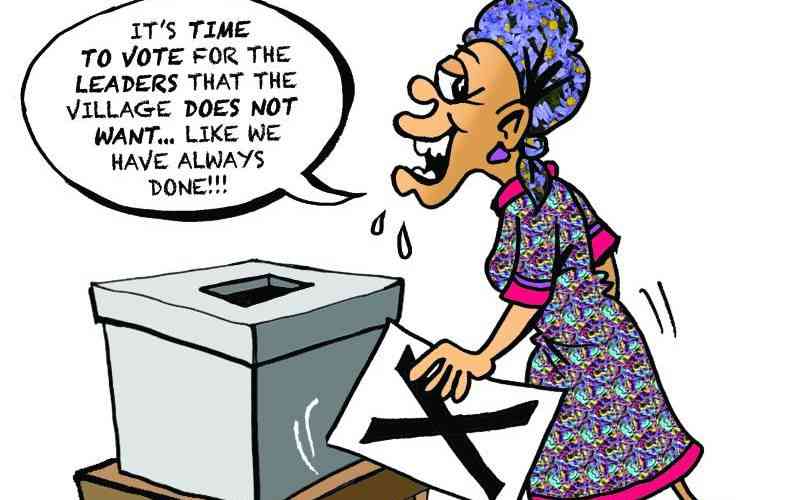 In two days, Gitegi will be going to the ballot to re-elect a dictator, who is also the local wine connoisseur, put his puppet into power or vote in the first ever lady to lead the village, Sue.

It is going to be an interesting contest, this one, now that it is looking like a family affair. Bookmarkers are predicting winners based on who has commissioned them and paid the highest, and because most of them know that Harold will most likely rig himself in, they show that he is leading.

Consequently, panicky opponents are accusing Harold of all manner of things. The other day, while addressing inebriated patrons, Sue said that Harold had been attacking her and had even claimed that she would know who he is.

“Why is he threatening me? I was with him when no one wanted to be with him. Even when he could not afford to even buy me flowers, I chose to be with him. Why would he talk that way?” she posed.

Moles say that Clarissa was angry at her principal for claiming that she was there for Harold when no one else wanted to be there for him.

Did Sue forget that Clarissa had been with Harold way before, and Paul was the unfortunate reminder of an unplanned meeting that gave more than it promised?

Sue reminded Harold of the many things she tolerated, including his gluttony. She sensationally claimed that if I had eaten half of what Harold ate, she would have died in the kitchen.

Harold has been saying, in secret meetings with his not-so-secret competitor yours truly, that Sue will be shocked when the results come in after August 9. With me in the tallying centre, Harold expects to romp to an easy victory.

He forgets that before I can get him rigged votes, I will be first looking to rig myself in.

We suspect that there has been a mole in our camp, for every time we have these late-night discussions, some information leaks and we realise that Sue is already braced for our next move. We did a ‘piki piki ponky’ and discovered that the mole was Paul.

The boy would later confess that he informed his mother about everything we discussed. Just as we were about to dismiss him, we realised that Harold was also a mole and in exchange for free alcohol, was giving out our tactics to Sue, a strong rival.

It has been a long time coming. It is time to vote for the leaders that the village does not want, as we have always done. As we head to the polls, I take this early opportunity to assure my fellow villagers that the elections will be rigged in a fair manner.

In the end, the voter’s body understands that the village wants the least qualified leader. That is something that I can promise to fix without much trouble.

As for the rest of Kenya, this is time to make a choice that either makes or breaks the country. It is not about who we love, or have; rather, who can perform above the threshold of mediocrity we have time and again set for our leaders.

This country is ours. Whatever happens on Tuesday, Kenya remains our home. When war ravages a country, ordinary citizens are the biggest losers.

If disputes arise, let us solve them amicably. Keep Kenya safe and love your neighbour as you love yourself. ​