By Steve Mkawale | 3mos ago

Four strong contestants having been cleared by the electoral agency to run for the Samburu governor seat in the August 9 General Election.

They are in the race to succeed Governor Moses Lenolkulal, whose second term is coming to an end.

In 2019, the anti-graft agency petitioned the court on grounds that Oryx Service Station, a company allegedly registered under the governor’s name, received Sh 80,715,000 in county funds between 2013 and 2018.

The matter is still pending in court and the fight is for the 80,000-odd registered voters in the county to elect a suitable candidate to succeed him.

All the candidates have hit the ground running – promising to improve the lives of the residents through development projects and pledging to fight corruption.

However, clan, age set and political affiliation will play key roles in determining who succeeds Lenolkulal.

Ruto’s United Democratic Alliance (UDA) settled on Lelelit while Jubilee Party, a member of Azimio has Lesiyampe in its corner.

Lt Col (rtd) Leyagu will be flying the Safina Party flag while Lekupe, the former intelligence officer, is an independent candidate.

In the 2017 general elections, Lenolkulal defeated two other candidates, by garnering 40,467 (63 per cent) of the valid votes cast.

His closest challenger was Gabriel Kimoroko Lengoiboni of Kanu who received 32 per cent of the  valid votes.

The elections recorded 79 per cent voter turnout for the governor race, as per IEBC records.

Statistics from the previous elections seem to favour the Jubilee Party and Kanu, which are key members of the Azimio coalition going by the way the people voted in 2017.

In those elections, Jubilee won the governor and Senate seats and seven out the 15 ward representative seats. It also bagged one of the three parliamentary seats.

The Woman Representative and two parliamentary seats went to Kanu.

Pundits say UDA has been making inroads in the county, with its leadership capitalising on its relationship with Jubilee before the fallout between President Uhuru Kenyatta and his deputy.

Lelelit, UDA’s candidate, is confident of victory saying besides his party gaining traction in the region because their bottom up economic model was resonating well with the locals.

“Our administration will focus on empowering women to venture into business opportunities, ensure that girls in the county enroll in schools and pursue their education without destruction like early marriages,” he said of his agenda, if elected.

Leleliit is banking on the popularity gained through the infrastructural projects he oversaw while representing Samburu West.

Lesiyampe, who is campaigning on the platform of transformative leadership with a view of improving the livelihood of the pastoral community, admits that party politics will play a big role in deciding who will be the next governor.

“Azimio is a formidable force in Samburu. With the support of President Kenyatta and under the guidance of our presidential candidate, we are sure of victory,” he said.

He plans to initiate projects that would ensure sustainability of the livelihoods of the pastoralists through agriculture, is top of his agenda.

“We have plans to ensure maximum utilisation of resources to ensure hunger, cattle theft are tackled effectively,” he said.

“I will ensure that opportunities are available for the young people so as to address hunger and poverty.”

Lesiyampe is also banking on his experience in governance to clinch the seat, come August 9.

The former PS has had a long stint in government, and prior to his appointment to the government, he served as the chief executive of  Kenyatta National Hospital.

Lekupe, the former intelligence officer, has based his campaign on tackling insecurity, which he says is to blame for the high poverty levels.

“We will bring peace to the Samburu residents by addressing the runaway insecurity, avoid inter-tribal wars cattle rustling and raids and encourage people through several initiatives to embrace agriculture,” he said.

Leyagu, the retired military man, is also campaigning on the platform of ensuring peaceful co-existence among communities.

Being a widely traveled soldier, who played a major role in peace missions in different countries, Leyagu feels that he is best suited to handle security concerns in the county.

“On peace, I want to assure residents that they have someone with experience in handling such issues. I will bring together the warring communities in a new strategy that I have, to end cattle raids,” he said.

As indicated earlier, clan politics play a big role in the county and occasionally, elders from Masula clan, which is the most populous, have a big say in determining who becomes the next governor.

They played a major role in Lenolkulal’s election in two previous elections.

Other minority communities living in Samburu are Kikuyu, Turkana and the Somali. They are likely to also influence the outcome of the governor race.

The two front-runners in the race are Lelelit and Lesiyamble, who both hail from the vote rich Samburu West constituency. 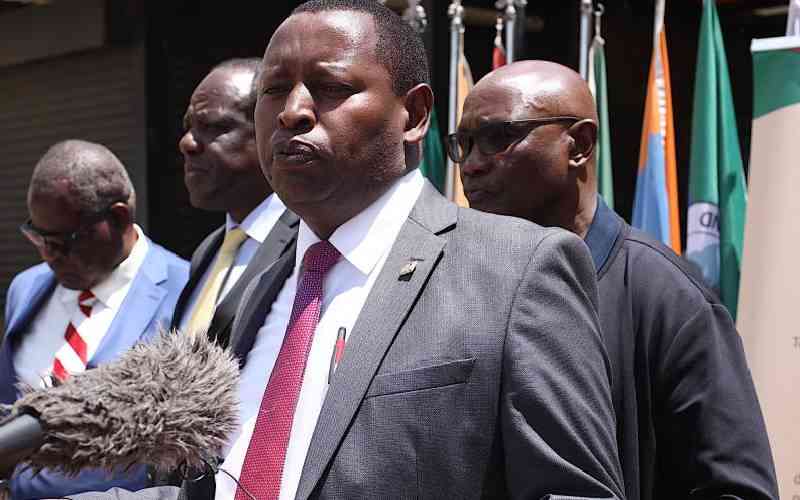 Four in race to take over after Lenolkulal term comes to an end
Statistics from the previous elections seem to favour Jubilee and Kanu, key Azimio members. Clan, age set and political affiliation will play key roles in determining the winner.
Rift Valley
By Steve Mkawale By Steve Mkawale
3 months ago
.