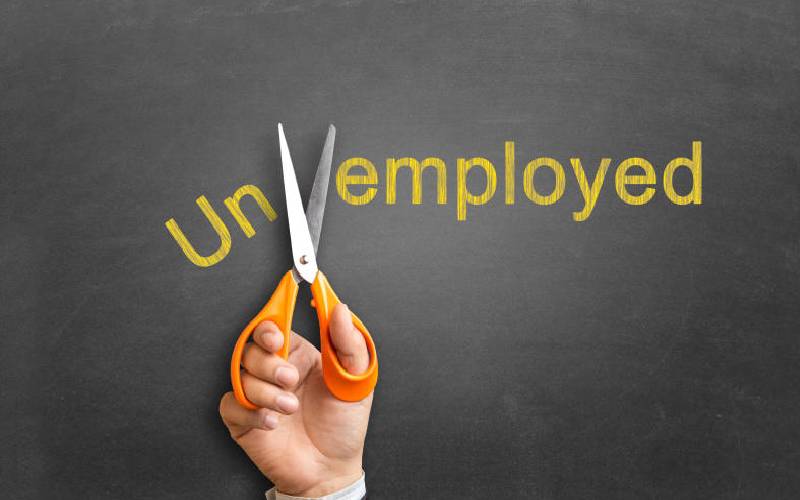 More than 1.7 million Kenyans lost their jobs within three months after the country recorded its first case of coronavirus, official data shows.

Kenya reported her first case of the virus in March and by end of June, those affected had been rendered jobless as crippling effects of the pandemic became apparent in what is turning out to be the country’s worst economic crisis.

Data from the Kenya National Bureau of Statistics (KNBS) shows the number of unemployed Kenyans shot up by more than half to 4,637,164 between April and June, from 2,944,724 in the January-March period.

The situation could be dire considering some of those retrenched may have given up on job-hunting hence, they have been categorised as economically inactive.

The number of economically inactive Kenyans - which also includes sick people, students and retirees - increased by 1 million, to 9,774,700, the data shows.

Those hit the hardest by unemployment, according to the national statistician, are young people aged between 20 and 29, an indicator that entry-level, non-skilled jobs, have buckled easily under the weight of the stringent containment measures implemented by the government to contain spread of the disease.

While releasing the Quarterly Labour Force Survey, a new survey that looks at labour participation after every three months, KNBS noted that the spike in unemployment indicated the significant impact of the pandemic on both unemployment and underemployment

“The highest proportion of the unemployed was recorded in the age groups 20-24 and 25-29, each registering over 20 per cent,” the report says.

The same age groups also had the highest increase, of over 10 per cent each, in unemployment over the three-month reference period (April to June),” says KNBS in the survey released in Nairobi on Monday.

Even more worrying is the dramatic increase, almost double, of the working-age Kenyans who were jobless and actively looking for work, a situation that has fed into the desperation that has characterised this period as many breadwinners were laid off.

Thus, unemployment rate, measured based on the strict definition (those looking for work), increased to 10.4 per cent in the second quarter of 2020, compared to 5.2 per cent recorded in the first quarter. It was also higher than the 4.7 per cent registered in the same quarter of 2019.

Another household survey by KNBS showed many Kenyans are struggling to pay rent or put food on the table due to reduced income.

According to the current survey, there were 1,841,918 Kenyans ‘tarmacking,’ or those who were out of work but actively looking for employment. This was an increase of 91 per cent from 961,666 in the first quarter.

Mr Gerrishon Ikiara, an economist, noted that as most bread winners lost jobs, some of their dependents - children, spouses or other relatives - may have been forced out of their cocoon dependency as they hit the road looking for work as well.

Kenya registered its first case of Covid-19 on March 13, forcing the country to institute containment measures to curb the deadly respiratory disease that started in Wuhan, China, in December last year.

To date, some 33,794 Kenyans have the virus. Another 572 Kenyans have succumbed to the disease. Globally, 25.3 million infections have been detected with over 843,000 deaths. The US, the most affected country, now has a caseload of six million with a death toll of 183,000.

Besides closing schools, President Uhuru Kenyatta directed all kinds of social and political gatherings be prohibited.

Hotels and restaurants were only allowed to sell takeaway food. Pubs, nightclubs and other entertainment joints were closed indefinitely as movements into and out of certain counties were restricted.

Airlines were grounded and a dusk-to-dawn curfew implemented in the process reducing business hours.

Sectors most affected by the curbs include real estate, aviation, entertainment, transport and trade.

Federation of Kenya Employers (FKE) CEO Jacqueline Mugo said a study they carried out, with the help of the International Labour Organisation in April, showed only 40 per cent of all enterprises had some activities going on.

“The rest were closed,” said Mugo, noting that they initially thought April would be the worst month with people resuming work in June.

“The picture is not clear even as we speak,” she said, adding that during the annual general meeting of their members on July 29, 700,000 jobs had been lost.

“That is really among our membership who chose to respond. And over 600 firms had resorted to some sort of redundancies and lay-offs,” she said, noting that the nature of contracts will certainly change from long-term to short-term.

Most of these jobs are in the informal sector.

Official data shows there were 2,928,333 Kenyans with formal jobs by the end of last December.

Most Kenyans, finding themselves without a job, have rushed to banks to have their loans restructured, with some negotiating for longer repayment periods.

Loans valued at Sh844.4 billion had been restructured by end of June as distressed borrowers sought some reprieve in repayment.

Of this, personal or household loans amounting to Sh240 billion have had their repayment period extended.

Economic forecasters have projected a tough period for Kenya in 2020, with the size of the economy expected to shrink for the first time in 20 years due to a reduction in productivity, according to International Monetary Fund and the World Bank.

The massive loss of jobs also reflected in the poor collection of PAYE (Pas-as-you-earn) taxes from permanent workers between April and June.

Data from the National Treasury shows that PAYE collected by the Kenya Revenue Authority during this period declined by Sh23 billion compared to a similar period last year, significantly denting the government’s efforts to meet revenue targets amid the Covid-19 pandemic.

President Kenyatta has, however, been relaxing the measures gradually as the country begins to score in flattening of the curve.

Airlines have since been allowed to fly within and outside of the country, a big boost to those in the aviation sector including thousands of employees in travel agencies who had been sent on unpaid leave.

Although the country has allowed for the re-opening of hotels and restaurants, it is still a long way for high-end hotels which entertain foreigners. Most visitors have cancelled their bookings, with industry experts noting that it might take almost a year before this industry bounces back.

However, Central Bank of Kenya (CBK) Governor Patrick Njoroge has been more optimistic about the hotels specifically and the economy in general.

In a press briefing in July, Njoroge told journalists that CEO of hotels, which had been hit the hardest by the Covid-19 pandemic, had told CBK in a survey that they had begun to register crucial forward bookings ahead of the start of international flights. International flights began on August 1.

Except for pubs, nightclubs and entertainment joints, most other economic activities have resumed, with hotels and restaurants being allowed to sell alcohol to sit-in clients.

The government has put in place measures aimed at ensuring businesses continued operating despite the stringent containment measures.

By Mate Tongola 22 mins ago
Japhet Koome: A profile of President Ruto's nominee for IG