By Judah Ben-Hur | 2yrs ago 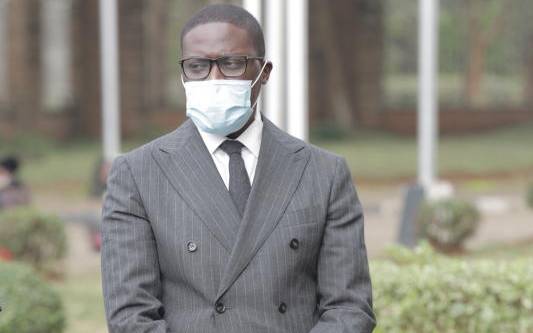 In  6.05 am tweet on Monday, Nairobi Senator Johnson Sakaja (pictured above) ushered the day with a sarcasm encouraging people to 'bang the keyboards' so that they can earn their daily wage.

The Nairobi legislator opened up for the first time to talk about hashtags that have lately dominated Twitter making him the nucleus of discussion. He claimed without mentioning names that some of his political enemies had sponsored the trendy hashtags.

The senator has come under fire following a debate on the proposed Country Revenue Allocation (CRA) formula of one man, one vote, one shilling which is population-driven and would have benefited Nairobi, Western, Rift Valley, Central and Nyanza regions.

It is this contentious issue that has led to a stalemate in Senate concerning the CRA formulae that holds the financial fate of different counties in the country.

However, together with Makueni Senator Mutula Kilonzo Jnr, the Nairobi Senator has proposed an amendment that ensures no county loses funds.

“The basic principle that we all agree upon as a Senate is that no county should lose a shilling of its allocation and Mr Speaker the formulae then kicks in once we’ve devolved enough money to go to the counties,” passionately said Sakaja on July 28.

The Senator took to the floor to also demystify some myths concerning the one man one vote, one shilling by stating that counties such as Kirinyaga and Laikipia would benefit from his proposal just like all other counties.

The backlash from Kenyans on Twitter through #SakajabetraysNairobi is due to the fact that the contentious suggestion of one man one vote would have benefited Nairobi the most even though countries such as Wajir- the 10th poorest county will lose up to Sh1.4 billion.

The trolls come two days after another one #shameonSakaja which also painted him as a leader who had betrayed his own country.

The Senate reconvenes tomorrow to consider among other options the amendment crafted by the Nairobi Senator and his Makueni counterpart.

This is not the first time that the legislator topped the chart of the social media discussions. Last month, the senator was charged with disobeying the containment measures after which he was released on Sh15,000 bond or a jail term not exceeding six months upon default.

After the incident, President Uhuru Kenyatta reviewed the health safety protocols banning bars from operation and prohibiting public consumption of liquor. The development had an adverse ramification on Sakaja whose name trended on Twitter under #ShameonyouSakaja, as Kenyans made all sorts of jokes blaming him for the closure of bars.