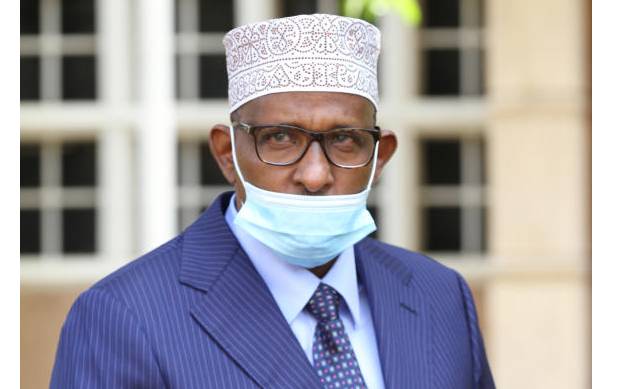 Vocal Garissa Township Member of Parliament Aden Duale (above) has been replaced by his Kipipiri counterpart Amos Kimunya as the Leader of Majority in the National Assembly as the purge on Jubilee Party rebels acquires an unstoppable finality.

The change was effected at the Jubilee National Assembly Parliamentary Group meeting chaired by President Uhuru Kenyatta at the Kenyatta International Convention Centre in Nairobi.

Eldas MP Adan Keynan has also been picked as the Secretary of the Jubilee Parliamentary Group to replace Kimunya. The meeting resolved that all committees are to be reconstituted on Thursday, June 25.

According to the State House, a total of 174 out of 179 members of Jubilee party attended the meeting, despite the backlash from a section of MPs who had vowed not to attend it.

Wangwe confirmed that Duale’s fate rested squarely on the party leader and the entire Jubilee leadership.

Kega had reportedly gathered 126 signatures out of a total of 179 Jubilee MPs to kick Duale out of the seat. But the Garissa Township MP survived in the last PG meeting in which the party made changes in the leadership of the parliamentary committees.

Also on the agenda, according to Wangwe is the formalisation of the recent changes made in the National Assembly which saw MPs Ben Washiali and his Cecily Mbarire dethroned from Majority Chief Whip and Deputy Chief Whip respectively. The two were replaced by Navakholo MP Emmanuel Wangwe and Igembe North MP Maoka Maore respectively.

It was initially unclear as to whether DP Ruto would attend the PG meeting owing to his frosty relations with the President. But he showed up masked in a navy blue suit at the KICC ahead of the meeting.

Bahati MP Kimani Ngunjiri accused President Uhuru of failing to unite the legislators in the recent PG meeting as he justified his decision not to attend the virtual meeting.

“The president has invited us for a PG meeting tomorrow. In the recent meeting, we expected the president to come and unite us. Instead, he hurled unpalatable remarks at us. As an elder I left the meeting feeling sick,” Ngunjiri said.

“We have not stopped him from doing anything he wants and we are in agreement. Whether it shall be our expulsion from House committees or firing some Cabinet secretaries, we have no problem.”

He also accused the President of bypassing Standing Orders used to appoint leaders to head committees in both the National Assembly and the Senate.

“We had standing orders at the National Assembly and Senate guiding how leadership and membership of committees was to be done. Unfortunately, the president changed that, making such appointments to be at his discretion,” he said.

Ngunjiri’s sentiments were echoed by his Kapseret Oscar Sudi counterpart who claimed that they insulted in the last PG, hence, it was needless for them to attend it this time round.

“I may be young, 40 years old, probably among the youngest leaders, but I won’t take myself to a place where I will be insulted by a fellow man,” said Sudi. As for the party Deputy Secretary-General Caleb Kositany, his views would not be tolerated in the meeting and therefore showing up would not make much influence for him.

- Sammy is a senior editor on  Standard Digital

By Biketi Kikechi 39 mins ago
Premium From early days in Kanu, William Ruto always fixed his eye on the prize

By Oscar Obonyo 1 hr ago
Premium For Raila Odinga, it has not been a walk in the park