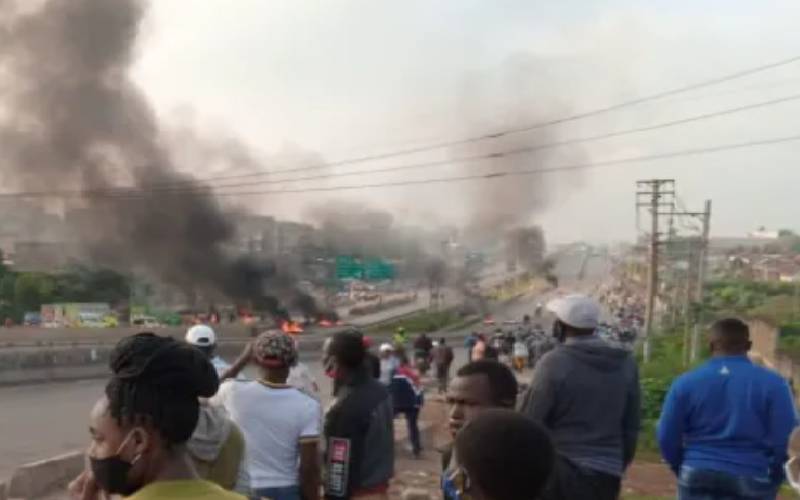 Police were forced to lob teargas and use water bowsers to disperse irate residents and traders of Kariobangi North who blocked Outering Road to protest the recent demolition in the area.

Traffic on the busy road was interrupted as the residents protested the Monday eviction from property said to belong to Nairobi Water and Sewerage Company.

The protests centred at the Kariobangi- Korogocho bridge – Komarock Road junction as rowdy locals lit a bonfire and blocked the road disrupting traffic for the better part of Friday morning.

Motorists were forced to use other routes as police battled the protesters for close to two hours.

The protesters mostly the Monday evictees and the Korogocho market traders are said to have taken to the streets after the demolition which saw bulldozers dig trenches disrupting supply to the market.

“We can no longer access the market because of the deep trenches disrupting movement of people and goods to the market,” a protestor told Standard Digital.

“We want President Uhuru himself to come here and witness first hand our suffering. We voted for him,” said Mary Wanjiru, a local. 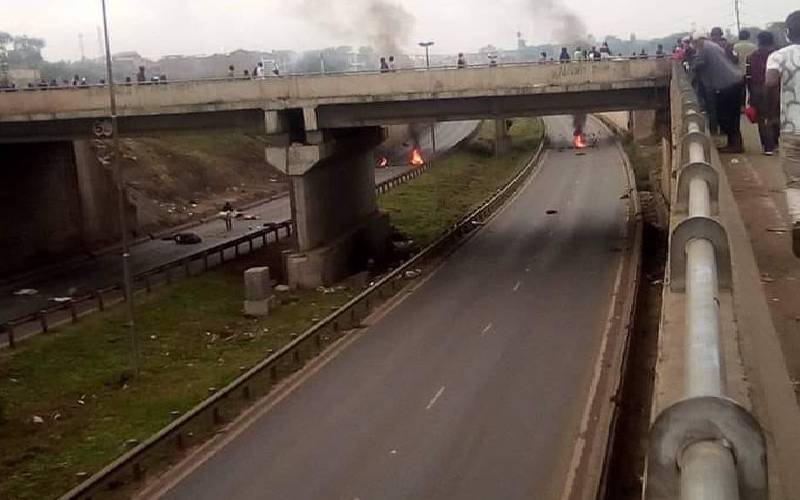 Gatundu South MP Moses Kuria on Friday morning said he and local leaders were to distribute food for the affected families before the protests started.

He has condemned those behind the demolition and evictions in Kariobangi, saying it was ill-timed.

Taking to his social media pages, the legislator said he acknowledged that the move is aimed at paving way for an ‘ultra-modern’ city project but could have been done at a later date considering what the country is currently going through.

Residents of Kariobangi Sewage Estate on Monday woke to the sound of bulldozers demolishing their houses.

The demolition was conducted by the Nairobi City Water and Sewerage Company and left more than 5,000 families homeless.

The water firm said it was reclaiming land which they claimed belongs to them and had been encroached on by the residents.

Many were irked by the exercise as it was carried despite a court order to the contrary. The victims also claim they were given only 24 hours to vacate their premises

By Michael Ndonye 45 mins ago
Premium Why most borrowers won't put hustler money into businesses
.