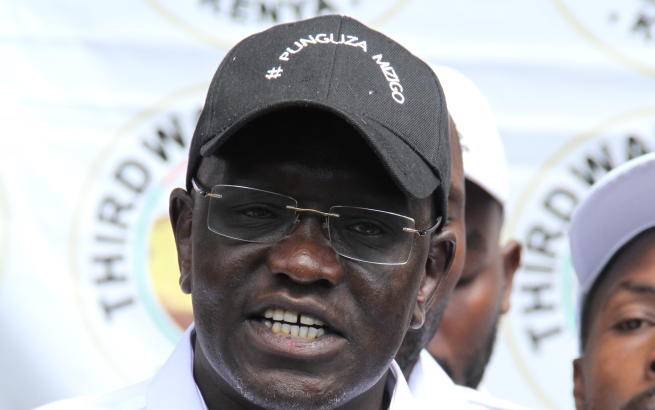 Thirdway Alliance Kenya Party leader Dr Ekuru Aukot (pictured) has faulted the government for instituting a national curfew saying that Kenya’s situation did not warrant such a move.

In a letter to Inspector General of Police Hillary Mutyambai, dated March 29, Dr Aukot said that the situation did not warrant the declaration of national curfew as stipulated in Kenyan law.

He said that Kenyans had been calm and there was no need to panic as they were observing the measures put in place by the government to combat the spread of the coronavirus.

While commending the efforts by the Health Cabinet Secretary Mutahi Kagwe to minimise the spread of the virus, Aukot nonetheless claimed that CS Kagwe’s vigour may have misled State House in [mis]reading the situation to declare a curfew.

According to Dr Aukot, the country does not at the moment experience security threats that would suit a national curfew.

He said many Kenyans who live from hand to mouth were suffering since the curfew limits the time and access to basic needs like food and water.

He said: “It is a fact that many Kenyans are suffering. They lack basic needs such as food and water. This is what prompts them to go out and look for food and water. There is no parent who would sit at home and watch his or her children starve to death. They will risk getting the virus to put food on the table for their children unless the government gives an alternative that would ensure they stay at home; as other countries have done.”

Dr Aukot, also The Thirdway Alliance boss, also raised questions regarding the preparation and the packaging of the message on the national curfew. He accused the government of making the decision in a rush and using the security forces to enforce it by use of excessive force.

He said the government had not explained to Kenyans what the national curfew sought to achieve and its impact on their lives.

He also said that the law enforcers appeared ill-prepared and inadequately appraised for the exercise. Also, he said that it was all clear that the government had no response mechanisms to probable atrocities that could be committed during this period and risk losing public trust and co-operation to enforce the curfew.

Aukot blamed the police for using excessive force and brutalising innocent people while enforcing the curfew.

“This action alone defeats the directive of social distancing directed by the President.”

The police have come under sharp criticisms after using excessive force to effect the 7pm to 5am curfew which was declared effective by President Uhuru Kenyatta on March 27, Friday.

So far two people have died at the hands of brutal police in two separate incidents over the weekend.

In the first case, a former General Service Unit officer is said to have succumbed to injuries sustained in a beating by police officers enforcing the curfew in Matuga, Kwale County.

The same fate befell a boda rider in Kosele trading centre, Rachuonyo, Homa Bay County, who died on Sunday after being assaulted by police officers at about 8 pm on Friday.

Yesterday, Health CS Mutahi Kagwe announced four more cases of coronavirus in the country, which took the tally to 42.