America
"Easter should be the peak number," Trump said of the Christian holiday which falls on April 12. 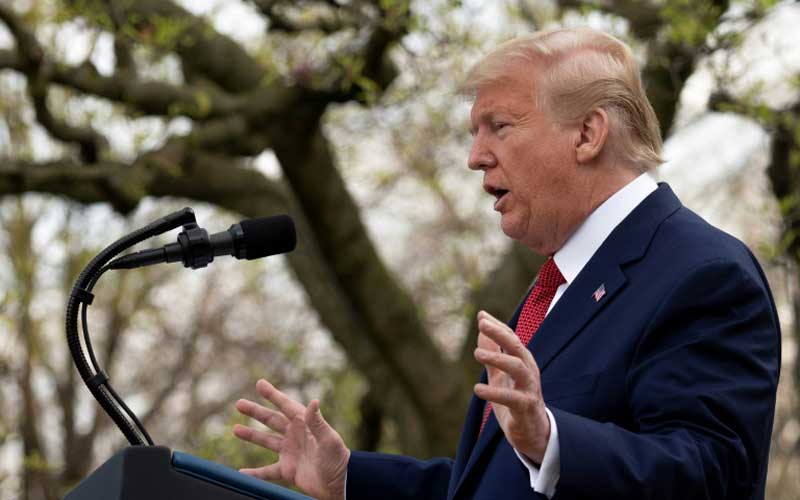 President Donald Trump (pictured) said Sunday that the peak death rate in the United States from the coronavirus pandemic was likely to hit in two weeks and extended "social distancing" guidelines until April 30. "Easter should be the peak number," Trump said of the Christian holiday which falls on April 12. "The modelling estimates that the peak in death rate is likely to hit in two weeks," the president said during a televised briefing in the Rose Garden of the White House.

"It should start coming down -- and hopefully very substantially -- from that point," he said. Trump also addressed statements by one of his top medical advisors, Anthony Fauci, who estimated on Sunday that the virus could possibly result in 100,000 to 200,000 deaths in the United States. Trump characterized that as a "horrible number" but said it would have been worse without the lockdown orders and other efforts taken so far to prevent the spread of the highly infectious virus. "Potentially 2.2 million people if we did nothing, if we didn't do the distancing," he said. "If we didn't do all the things we're doing." Trump said he was extending the government's "social distancing" guidelines until April 30 to "slow the spread" of the virus.

According to a tally by Johns Hopkins University, there are nearly 140,000 confirmed virus cases in the United States and more than 2,400 people have died. Johns Hopkins recorded a record 518 new coronavirus-linked deaths in the past 24 hours, up from the previous day's increase of 453. "It's very important that everyone strongly follow the guidelines," the president said. "Nothing would be worse than declaring victory before the victory is won," he said at a briefing that saw him lash out several times at reporters and criticize the CNN network and The New York Times. June 1 target

Trump said he expects the country "will be well on our way to recovery" by June 1 -- dropping his previous target of Easter. "June 1," he said. "That's aspirational but I think we're gonna hit it." But the president backed off previous statements he has made about opening up parts of the country which have not been affected by the virus so far. "They said 'We don't like that idea,'" Trump said of Fauci and other medical advisors on his coronavirus task force. "They didn't like the idea." The president said there would be an "important" announcement on Tuesday about the government's plans and strategy going forward.

"We're going to have a meeting, speech, press conference or something on Tuesday," he said. "We will be finalizing these plans and providing a summary of our findings, supporting data and strategy to the American people." Trump was also asked if he would support another massive economic relief package such as the $2.2 trillion spending bill passed by Congress last week. "I'm prepared to do whatever's necessary to number one, save lives and number two, bring our economy back strong, just like it was before," he said. "I think our economy has a chance to be just as good and even better than it was before."

Protests heat up as curfews imposed in several cities