Europe
The 83-year-old Pontiff, who had part of one lung removed because of an illness decades ago, reportedly tested negative for the virus. 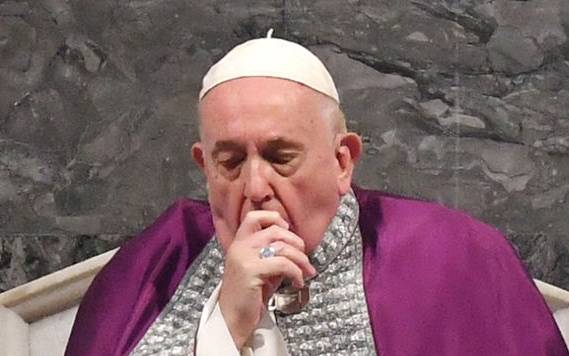 Pope Francis has been tested for coronavirus after suffering from 'cold-like' symptoms in recent days. The 83-year-old Pontiff (pictured), who had part of one lung removed because of an illness decades ago, reportedly tested negative for the virus. The Vatican has not commented on the reports which were revealed by Italian newspaper Il Messaggero.

SEE ALSO: 'I had no choice': Sex for rent rises with coronavirus poverty

On Sunday, Pope Francis was seen coughing and sneezing during his first public appearance in four days. Speaking to thousands of people in St Peter's Square, the Pope announced his cold will force him to skip a week-long Lenten spiritual retreat with senior Vatican officials that had been due to start later in the day. He appeared at the window of the Vatican's Apostolic Palace for the first time since Wednesday for his weekly Sunday noon message and blessing. He said: "Unfortunately a cold will force me not take part this year (in the retreat). I will follow the meditations from here." The pontiff attended the Ash Wednesday mass last week and he appeared to be suffering from a cold.

He was seen blowing his nose and coughing during the service and his voice sounded hoarse. The Vatican had previously said only that he was suffering from a "slight indisposition". His spokesman Matteo Bruni dismissed speculation that Francis was anything more than slightly unwell. "There is no evidence that would lead to diagnosing anything but a mild indisposition," he said. Italy has registered more than 1,100 confirmed cases the virus since February 20 and at least 29 deaths - making it the worst affected country in Europe.

A conference on the world economy due to take place in Italy later this month with Pope Francis taking part has been postponed until November, organisers said on Sunday.