Ng'eno arrested for holding illegal BBI rally in his constituency 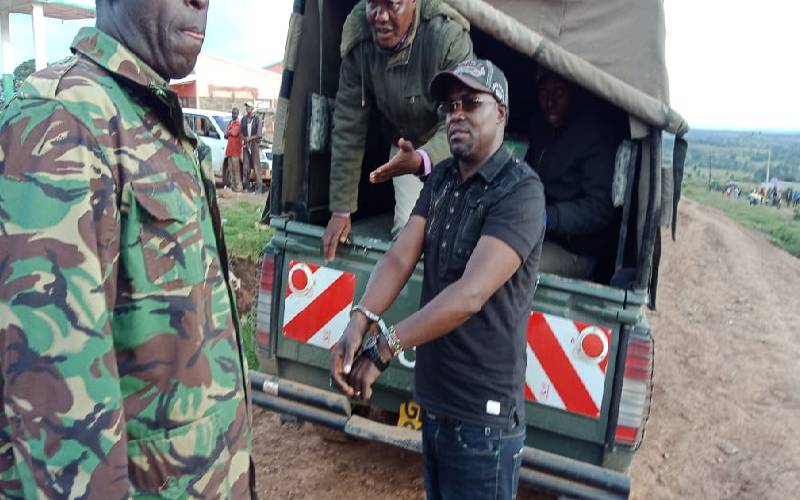 Vocal Emurua Dikirr MP Johana Ng'eno has been arrested at Kimogoro trading centre in his constituency for allegedly holding an illegal Building Bridges Initiative (BBI) rally. Ng'eno held the meeting at his constituency to collect views to submit to the BBI task force after him and other non-Maasai elected leaders skipped the Narok BBI rally over what they described as ethnic profiling. There was drama at Kimogoro trading centre after the security personnel stormed the rally and fired teargas canisters and shot in the air dispersing the crowd before arresting the MP. According to witnesses the police had been notified of the meeting but were surprised that the MP was arrested. "The meeting was at climax and people were giving their views with moderation of the MP. All of a sudden teargas was lobbed into the crowd. Everyone fled towards different direction and that's when the MP was handcuffed and bundled into a waiting police vehicle," said the witness. The source said the MP efforts to convince the police not to arrest him fell on deaf ears as he was whisked away. The MP is said to be headed to Ololung'a police station amid protests by his constituents. Area County Police Commander Kizito Mutoro confirmed the arrest but said that that legislator had not been booked. “I understand he was arrested but I had ordered by officers to release him. He is yet to be booked for any offence so I cannot say he has been arrested," he said. The move comes barely hours after area County Commissioner Samuel Kimiti issued a stern warning against politicians for fanning violence through incitements. Ngeno with Narok Deputy Governor Evalyn Aruasa and about 10 MCAs from the Kipsigis community stormed out of the BBI delegates consultative meeting at Maasai Mara University on Friday before skipping the Saturday rally.