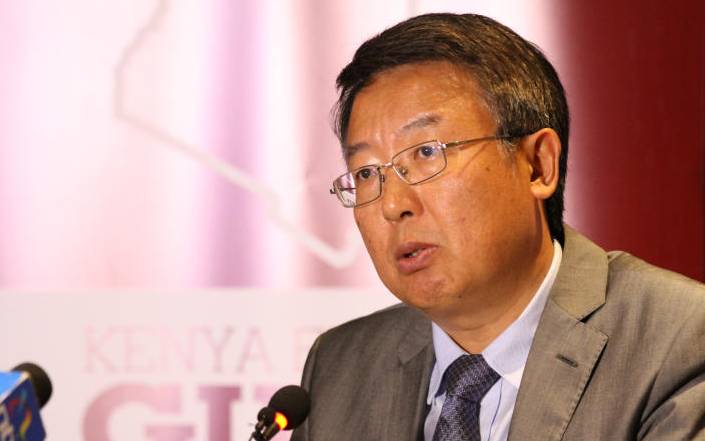 China Ambassador to Kenya Mr Wu Peng (above) has said the embassy has taken preventive measures of quarantining Chinese coming to Kenya. Speaking while addressing a media briefing organised by Kenya Editors Guild(KEG) at a Nairobi hotel today, Mr Peng said the move is to avoid the spread of the coronavirus, which has now affected 60,000 Chinese nationalities. He said: “We have taken these measures to ensure that they do not carry the virus from China to Kenya. I and the embassy has kept close touch with the Government of Kenya, including Ministries of Foreign Affairs, Health, Transport on the prevention and control of the disease."

"We continue to monitor the entry of our nationals into Kenya and have instructed them to strictly adhere to the prevention and control measures. We have required all Chinese nationals coming back from China to isolate themselves at home for 14 days even if they have no symptoms.”  He said according to the latest data from the Chinese National Health Commission, as of February 13, 2pm (Beijing time), a total of 59,885 confirmed cases, 1, 368 fatalities have been reported, 6,000 people have been cured in China (including HongKong, Macao, and Taiwan). The ambassador, however, gave encouraging news, by stating that as of February 12, the newly reported confirmed cases in China (excluding Hubei) has marked the ninth day of declining. Mr Peng also said it was not a good decision to evacuate Kenyans and other nationals, who are stuck in the Wuhan City-an area under lockdown since this will encourage the spread of the virus. “The Government of China is doing all it can including allocating 67 billion yuan for fighting the outbreak, and over 20 tons of medical supplies are being handled and delivered every hour to contain the virus and therefore, evacuating some foreigners as some countries are doing, have done or thought of doing is not a solution but just accelerating the spread,” he said.

More than 23,000 medical staff have been mobilised and deployed to Hubei to offer all needed support, he said. “Two new specialised hospitals with over 2,600 beds for the coronavirus treatment are now being operated in Wuhan. Dozens of mobile cabin hospitals are set up to treat mild symptom patients and therefore there is no need to worry,” he said. He said China is working closely with the World Health Organisation to come up with the vaccine for the virus. He advised Kenyan traders to avoid going to China for some time given until such a time that the virus shall have been contained. “Kindly be patient as the situation is being fought. You can think of using e-commerce to get your goods from China instead of going there,” he advised.

Many Kenyan traders fly to Guangzhou to import goods for sale in Kenya. Currently, many businesses have been affected due to the virus.