Stop shouting and soberly answer queries on the BBI 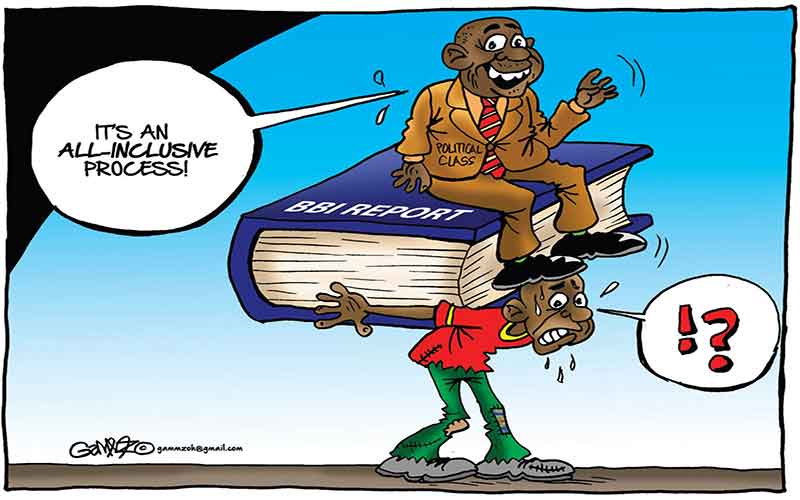 History is full of lessons for modern-day society. What we do with them is entirely up to us, for better or worse. Appeasement was Europe’s policy towards Germany after World War I (1914 – 1918). The policy was especially in its element in the 1930s. After the terrible killings of World War I, Europe was ready to give anything for “peace.” She was rewarded with World War II. Terrible experiences will make us do almost anything to avoid a repeat. Regrettably, we then make mistakes that lead us right back to what we tried to avoid. In the case of Europe, appeasement meant making concessions to Germany, in order to avoid conflict. The “War Guilt Clause” in the Peace Treaty of Versailles (1919) heaped upon Germany all blame for World War I. Heavy fines and sundry stringent terms were imposed. They made Germany very unhappy. Germany’s restlessness suggested that she could easily reject these terms and plunge Europe into another war. Europe, therefore, entered into other treaties that led to the policy and practice of appeasement. Put simply, Germany got used to “being spoilt.” She asked for more and more. In the end, even the most ardent patrons of appeasement could no longer stand the demands. The lead appeaser was the British Prime Minister, Neville Chamberlain. Used to having things her way, Germany (and her ally, Japan) was ready to go to war. There followed a period of six years and one day of iron and blood – across the globe. Seventy-three million people were killed. Is Kenya having her own season of appeasement? Appeasement requires that everyone should embrace what philosophers call “a relativistic ethic.” This is to say that things are good or bad relative to who says them, or who does them. If a certain mister says it, then it is both right and good. If another mister says it, it is wrong and bad. We are only guided by the need to satisfy and pacify a certain mister. Hence, in Kenya today, does it seem that what is good and right is defined as that which will please President Uhuru Kenyatta and ODM leader Raila Odinga? It is what they do, or say. They justify it by stating they are building peace.

Equally, wrong and bad is defined around DP William Ruto. I hold no brief for him. In a different arena, I should regard him as an opponent. Yet when someone is right, he is right. Nothing you do could negate that. In his sermon of February 28, 1954, titled “Rediscovering Lost Values,” Dr Martin Luther King Junior stated, “Some things are right and some things are wrong. Eternally so, absolutely so.” Things cannot be right because we want to appease somebody, anybody. Nor can they be wrong just because of their author. The idea of an expanded national Executive in the Building Bridges Initiative is bad. So, too, is the idea of introducing regional governments as a new tier. Kenya’s topmost political brass is running amok with thirst for power. When I last checked, 85 per cent of public spending was going towards recurrent needs. This means that out of every Sh100, we were spending Sh85 on salaries, allowances, maintenance and repairs. Only Sh15 was going towards development. Selfish proposals I do not know whether the Deputy President’s team is talking out of genuine selflessness, or because it must oppose BBI. Whatever the case, I am afraid, they are right. We are hearing a lot of self-serving stuff in the BBI. What we are not hearing is the cost of these selfish proposals. It is going to be extremely important to cost these things. The costs must be part of what will be taken to the referendum. Let Kenyans be told the cost of what they are being led into. But that is not all, let them be told how we purpose to raise money. We have heard two shocking concerns as part of the energy driving the BBI. The first was that President Uhuru was too young to retire in 2022. He should be 62 at the time. Hence, we must change the Constitution so as to give our youthful 62-year-old President a fresh lease of political life. The second concern is that 23 governors will be retiring. We should, therefore, create a new tier of government for them. Now this is pure madness and rubbish. It should not surprise me that Kenyans will vote for this madness, to appease the political class. The question ought not to be what happens to Uhuru, or to retiring governors, after 2022. The question, instead, should be what happens to the youth who will graduate from institutions of learning between now and 2022. Where will they go? Over the next 10 years, what will happen to the millions now in school? Where will they go? What about the jobless today? These people, and not Uhuru, or the governors, are the publics that should concern Kenyans. What should they become?

Cotu has shamefully been caught at the wrong end in this drama. The apex trade union organ is concerned about the future of the President and the governors. Cotu should be asking about the cost of the BBI to the tax payer. It should be asking for the cost of the proposed new government structure, the tax implications and the quality of the taxpayer’s lifestyle. Whether they are saints or devils, I am afraid Tangatanga are spot on. We should not just agree so as to appease some people. The President, and the ODM leaders, should stop screaming at us. Instead, they should soberly answer our questions. — The writer is a strategic public communications adviser. www.barrackmuluka.co.ke