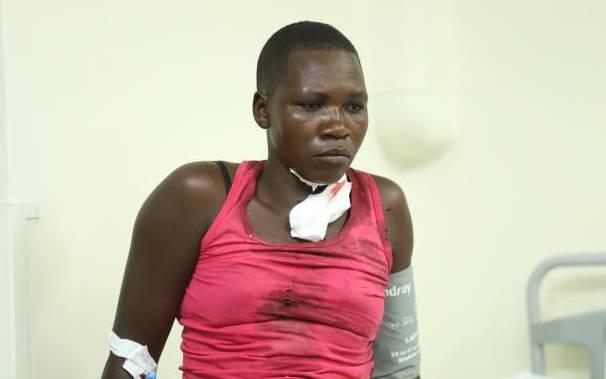 A 29-year-old woman who allegedly attacked her four children and attempted to kill herself on Tuesday is likely to face charges of attempted murder. Kisumu County Police Commander Renson Lolmodol yesterday said Mercy Anyango (above), who is currently admitted to Jaramogi Oginga Odinga Teaching and Referral Hospital, will face the law as soon as she is discharged. “We are waiting for her to get relief before police can take over the matter. She may have to face charges of attempted murder of the children and attempted suicide,” said Mr Lolmodol.

Yesterday, hospital CEO Peter Okoth confirmed that all the four patients were stable and that they might be discharged in the next three days following their response to medication.

“Only one child seems not to be in a very stable condition, but the doctors are working round the clock to ensure all the patients are out of danger,” Dr Okoth said. Anyango and her children aged 13, nine, seven and five were admitted with open wounds caused by knife stabs. The woman is said to have stabbed the children and turned the kitchen knife on herself after what she termed irreparable misunderstanding with her husband. Neighbours broke into the house to save the five people before they were taken to a nearby hospital, which transferred them to the referral hospital for specialised treatment.

Witnesses said they heard screams from Anyango’s rental house in Awasi, Nyando Sub-county, prompting them to move closer. “When we moved to check, we saw her stab one child after another, forcing us to break in and disarm her,” said a neighbour who asked not to be named. The neighbour’s sentiments corroborated Anyango’s admission to having locked the children in the house before stabbing them randomly. According to Anyango, who is married in Kosele, Homa Bay County, she had separated from her husband George Oketch following numerous domestic squabbles. They had five children. Anyango said in a bid to fend for her children, she moved away from the troubled home to a nearby village where she got casual jobs at a farm.

SEE ALSO: Granny dies after girl hits her with stone

“The person who gave me the job of working in his farm also understood my situation and gave me some small house within his compound, where I lived with my children,” she said. Anyango, however, claims that the father of her children was uneasy with her living in the same village, and threatened her several times. This forced her to move to Awasi in Kisumu County. She claimed she had been linked by a friend who wanted to introduce her to some business in the place she considered far from her husband’s drama. Anyango wanted to rely on her pay from the previous employer as capital to start the business. She, however, claimed that the employer informed her that Oketch had been visiting their home, threatening to harm her family should she send any money to Anyango, with claims that she was part of the troubles facing the family. Yesterday, Anyango who claimed to have been overwhelmed by the husband’s stalking, decided to take away her life and that of her four children. “I could not fend for my children, and my husband had also declined to support them. So I wanted to have some rest,” she said from her hospital bed. Anyango said she went for the kitchen knife, which she used to stab the children randomly before she heard neighbours break in and wrestle the knife from her. Oketch admitted that Anyango was indeed his wife, and that they had separated. He, however, denied being the cause of the botched suicide. “She is the one who moved out of our family home with all our five children, but our 15-year-old first born managed to return,” said Oketch.

He said Anyango had been married in the home where she had been claiming to be working in a farm, a situation that prompted him to try to take away his children. Anyango, he said, declined. “This is an issue we have been following through the Children’s Department so that I can take my children and let her move on. But the matter has not been settled. I was surprised to receive information that she attempted to kill herself and the children,” said Oketch.