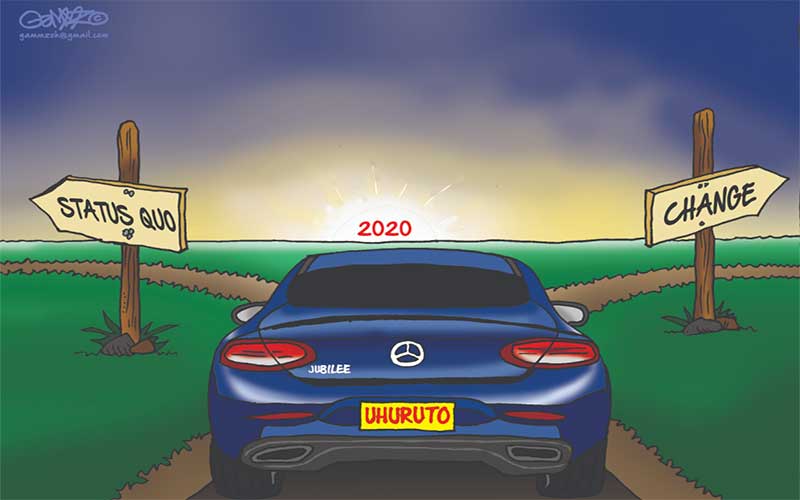 Locusts have invaded northern Kenya. Millions upon millions of locusts have overwhelmed Mandera, Wajir and neighbouring counties, according to regional MPs. The insects have descended like a mighty army. They are everywhere, attacking every leaf in the way. When they are done, they will migrate in a mighty cloud, to find the next pasture.  On Thursday, Wajir County’s Minister for Agriculture told journalists that “he had heard there was a helicopter in Mandera.” He said the helicopter could be used to spray the desert beasts tormenting his county. He suspected the chopper could be in Wajir in about four days. Within that period, experts say, the locusts would have destroyed enough crop to feed 2,500 people for four years. The Ministry of Agriculture at Kilimo House remains tight-lipped. They are still winding down their Christmas and New Year activities. The county governments in the North have not said anything much either, apart from one minister hearing about a helicopter. The good news is that the police have been firing bullets at the millions of locusts. Yes, you are reading right – the police are shooting at the insects, possibly to scare them away. Besides, the citizens have been advised to help by blowing whistles and shouting.

Welcome to Kenya in 2020. The year lies vastly ahead, waiting to be explored. Seasons such as now remind us of the great Winston Churchill. He told the free world after World War II in 1945, “The future stands before us, to make or mar.” And the year 2020 stands before Kenyans, to make or mar. We have arrived riding on waves of locusts, floods, food challenges, road accidents, school fees – and the good Lord knows what else. We have come perched on the wings of contestation. Kandara MP, Alice Wahome, fired the first shot. She told President Uhuru Kenyatta, on Wednesday, to prepare for retirement in 2022. She stirred a beehive. They will be coming for her in the next few days. Watch the news on local TV this weekend. You will see it. I will bet my last coin, after everything else went with the Christmas season. Kenya in 2020 will remain the land of the great unwashed and useful idiots. Don’t get angry with me so fast. Let me explain. In social science, useful idiots are persons who are used to spread propaganda that they don’t understand. It sounds good to them, because they think the owner of the propaganda is one of them. These wretched souls have filled up massive pages in history. Today they abound in Kenya. They follow any alluring object that the wind moves. They are the useful idiots – despised by those who use them, but who love to use them. Below the useful idiots are the great unwashed, a massive ignorant population that is by far worse than the useful idiots. In the dystopic novel titled Nineteen-Eighty-Four, George Orwell called them the proles. And make no mistake, Kenya in 2020 is a true dystopia. The Secretary General of the Central Organisation of Trade Unions (Cotu) moves from post to pillar, preaching his fear that the President is about to become jobless. Dystopias don’t get worse. The workers union boss says, “The President is too young to retire.” Cotu is therefore about to embark on “Change the Constitution” campaigns, so that Kenya’s young President can have a new job in 2022. The useful people in the trade unions say nothing about the jobless youth. Nor do they say anything about the hundreds and thousands who are retrenched every day. They have only one worry, “Uhuru is too young to retire in 2022.”

The national government and devolved government alike begin becoming burdens. When people want to be made Prime Ministers and Deputy Prime Ministers, what do they want the citizens to become? Look at this again. When locusts have accosted a region, the best intervention has been for policemen to shoot at them. When the youth have been laid off, or remained jobless, the unions have done nothing except to lament that the President is about to join the jobless. When the Judiciary is getting into a lockup, neither the Executive nor Cotu are concerned. The foremost teachers’ union in the region (Knut) is being killed, nobody is concerned – not the useful ones, the unwashed, or anybody else. The Knut Secretary General (who is a part of the problem) hobnobs with those who should be speaking for teachers and for the country. Yet they will do no such a thing. They are instead worried that the President is about to become jobless. We must, therefore, change the Constitution to accommodate him and others in government. The start of the new year is useful point to pause and ask whether we are going to make the future, or to mar it. Talk of “a President who is too young to retire” must go. Even before ODM leader, Raila Odinga, tells the country that Deputy President William Ruto must go, he needs to agree that the Constitution, as the will of the people, is supreme. President Uhuru must go in 2022. There can be no two ways. Also needing to go is Cotu Secretary General, Francis Atwoli. He has grossly failed the young workers. Atwoli must go. Jubilee Party’s eighty-three-year-old Dr Noah Wekesa, also says the President is too young to retire. So, too, does Senator Beth Mugo, the President’s eighty-year-old first cousin. All these people need to retire, or be retired. They are far too focused on themselves to be of any good for the rest of the country. They must go.