Nairobi Governor Mike Sonko and his co-accused have denied multiple charges of corruption at Milimani Law Courts, Nairobi.  His bail application, which the prosecution opposed, was to be heard at 2.30pm. On a wet Monday morning, a convoy of cars wove through the streets of Nairobi CBD on their way from the Integrity Centre to the Milimani law courts which was a no-go-zone for other motorists as police threw an iron ring of security around  Upper Hill where they are situated. Inside a white van was the Nairobi County Governor Mike Mbuvi Sonko who was awaiting his long day.

Sonko, who was accompanied by several county government officials entered the courtroom clad in a black baseball cap, a military-themed hoodie and a black T-shirt. A tensed-up Sonko would occasionally smile as he consulted with his lawyer. The governor would stroke his chin and throw an occasional look at the people in the courtroom when he was not fixing his gaze on Chief Magistrate Douglas Ogoti who was presiding over the case. The court session kicked off at 9 am with his defence team making an application for his bail hearing, which the court ruled would be done at 2.30 pm. Sonko's lead lawyer Cecil Miller introduced a phalanx of his lawyer colleagues ahead of the plea taking.

They included Mutula Kilonzo Jr, Harrisson Kinyanjui, Daniel Maanzo, Kipchumba Murkomen, Nelson Havi, George Kithi, Kwanga Mboya, Osundwa Micheal, Alphonce Mutinda, and Phillip Kaindu among many others. The governor and his co-accused have pleaded not guilty to several corruption and other economic crimes charges. The governor alongside the directors of Web Tribe Ltd has been accused of corruption and conspiracy to defraud the county government of Sh24 million. The charge sheet tabulates the other fifteen charges of conflict of interest involving Governor Sonko and Web Tribe Ltd, ROG Security Ltd associated with Antony Otieno Ombok among other companies and their directors. Predominantly, under the charge of conflict of interest, the governor is accused of receiving Sh1 million from Yira Enterprises in deals that involved hiring heavy equipment from the county government.

SEE ALSO: Sonko wins round one in row with Uhuru over city

Under the charge of conflict of interest, Sonko has been accused of acquiring Sh1 million from Fredrick Odhiambo of Yiro Enterprises on multiple occasions, despite knowing that such funds were proceeds of crime. Sonko also faces charges of money laundering and receiving proceeds of crime from Hardi Enterprises Ltd and Toddy Civil Engineering Ltd associated with Antony Mwaura Ng'ang'a and Rose Njeri Ng'ang'a. 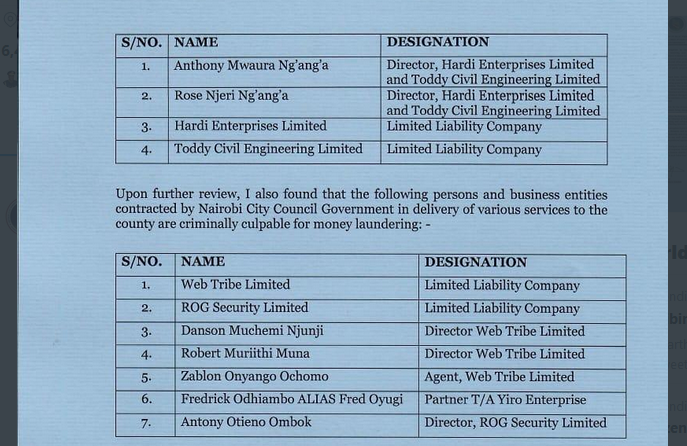 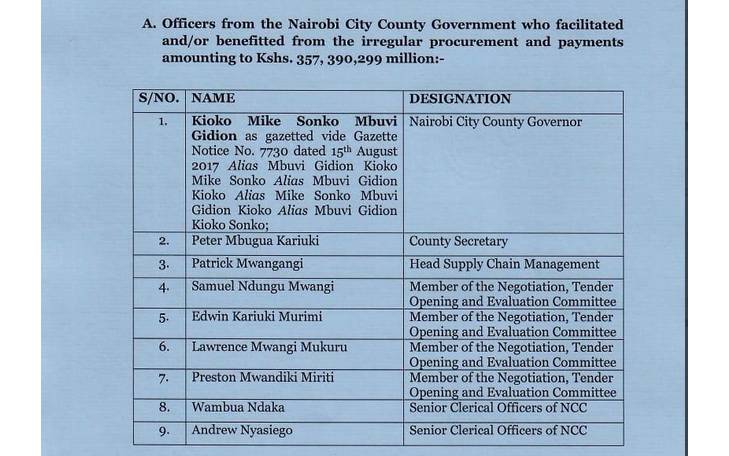 The Director of Public Prosecutions Noordin Haji issued a detailed charge sheet yesterday in respect to the governor, 15 co-accused, and four companies.

The accused face nine charges including conspiracy to commit offence of corruption, willful failure to comply with procurement laws, conflict of interest, abuse of office, unlawful acquisition of public property, deceiving principal, money laundering and acquisition of proceeds of crime. In the soup are also county officials who have been charged with benefitting from the irregular procurement and payments. They are County Secretary Peter Mbugua; Head of Supply Chain Management Patrick Mwangangi; Negotiation, Tender Opening and Evaluation Committee members Edwin Kariuki, Lawrence Mwangi, Preston Mwandiki and Clerical Officers Wambua Ndaka and Andrew Nyasiego. Earlier today, another charge sheet emerged in which the governor was accused of committing three offences during his arrest in Voi on Friday. They include “unlawfully assaulting Regional Police Commander Mr Rashid Yakubu, by kicking him on the thigh, in the due execution of his duties on December 6.” The second count read that Sonko “willfully resisted arrest by Mr Rashid Yakubu A.I.G the Regional Police Commander, Coast, by violently refusing to be handcuffed and to board a police chopper in due execution of his duties.” On the third count, he was accused of ‘using abusive words namely ’shenzi nyie, taka taka, ondoka hapa’ meaning; you stupid rubbish move away, with intent to provoke a breach of the peace.” Yesterday, Governor Sonko issued a statement protesting his innocence. He said that his arrest was politically-triggered and criticised the government for “missing” state resources to airlift him to Nairobi from Voi.

SEE ALSO: Sonko and Badi should get Nairobi up and running

“I am convinced that my arrest was politically-schemed and designed to humiliate and embarrass me,” read the statement. “There was no point for the deployment of a police helicopter, more than 25 police cars, and 200 police officers to locate and arrest me while we all know on that on the same material day there was terror attack in Wajir County where the chopper with this kind of reinforcement, deployment and operation was needed.” Sonko was arrested in a drama-field encounter on Friday in Voi and flown to Nairobi where he was locked up at the EACC headquarters over the weekend. He denied police reports that he was escaping to Tanzania when he was grabbed.

Sonko and Badi should get Nairobi up and running