Sonko: The City Father who's a law unto himself

THE BULLY NO ONE DARES TO TOUCH: He has the money, the guts and energy. He prides in his criminal record. He has threatened rivals, intimidated county workers and scandalised women leaders. He has a public office but runs a fearsome parallel outfit that is a law unto itself. He has cowed even top government officers and detectives. A populist whose antics excite some – a master of expletives – his leadership style is suffocating the city. How do you solve a problem like Sonko?

If laughter was all the 4.4 million residents of Nairobi engulfed by a cloud of economic gloom needed, then their governor would have executed his job.

Mike Mbuvi Sonko, a swanky and clownish man with a chequered history, spends more time trading barbs on Twitterville than touching base with his voters in Mathare, Kibera and Mukuru slums.

Only this is not the time for jokes. Technically, Mr Sonko is Nairobi’s president — he oversees an economy valued at Sh2.7 trillion, according to official figures. And at a time when the overall economy is struggling, Sonko is one of the men Kenyans are looking to stop the bleed.

Aside from jobs, residents of Nairobi need piped water, traffic-free roads, orderly markets, and better healthcare. Unfortunately, rather than inspiring Nairobi with his leadership, Sonko has largely left behind a trail of destruction.

City Hall is as messy as the streets of the city’s Central Business District, which have been colonised by hawkers and boda-boda riders. Almost all members of the County Executive Council have been ejected, and for almost two years, the governor has operated without a deputy.

Insiders talk of a demoralised work-force at City Hall. Things are at stand-still, with officers lacking rudimentary facilities like stationery and fuel. And with the planning department paralysed, no new building plans have been approved for months, a situation that has drawn backlash from county ward reps, as well as the Architectural Society of Kenya.

In September, Sonko suspended 16 county government officials largely drawn from the planning department following the collapse of a building at Precious Talent School that resulted in the death of seven pupils. Before that, he had suspended Urban Planning Chief Officer Justus Kathenge.

Further, while the value of buildings approved for construction in the capital city had been increasing steadily since 2012, peaking at Sh314 billion in December 2016, there has been a nose-dive. The value has dipped by more than a third — Sh104 billion — to settle at Sh210 billion by the end of 2018.

The flamboyant governor is operating with only 11 out of a required 23 chief officers, following his decision to fire or suspend those he deemed corrupt or undermining his authority.

Yet, the capital city’s billions of shillings cannot be left to the machinations of a few. In the 2015-16 financial year, Nairobi collected Sh11.7 billion from parking fees, business registration, cess fees from traders and other permits. This amount has since dipped to Sh10.2 billion in 2018-19.

From 2017 when he took over from Evans Kidero, the Nairobi CEO has received close to Sh32 billion from Treasury.

But aside from the patchwork repair of backyard alleys in the CBD, a stage-managed campaign to remove hawkers from the city, and a badly thought-out initiative to bar matatus from getting into the city centre, there is little to celebrate from these allocations.

Yet he has fans who see his ad hoc Sonko Rescue Team as a parallel public service provider. It is not clear who pays it, or how. The team, however, has played a crucial role in building his public image among voters in the city’s most populous wards. 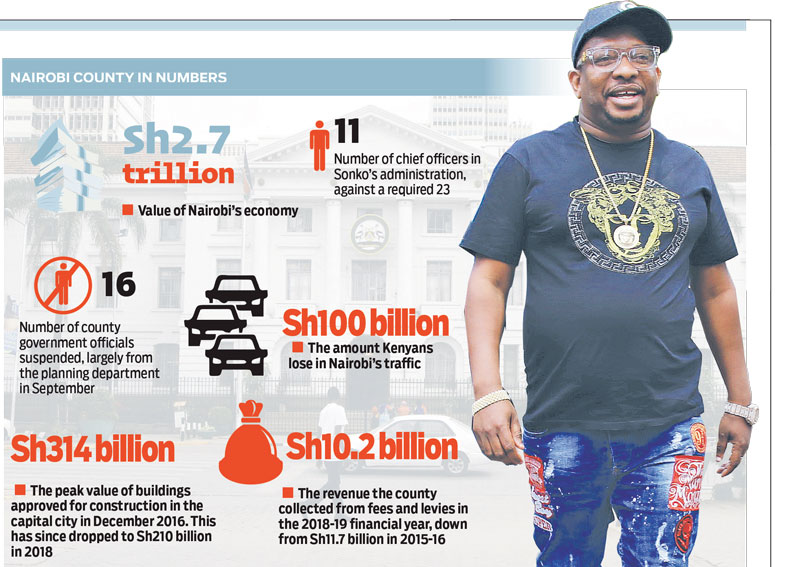 Sonko, who has never shied away from his ‘gangster’ background — he had a stint in prison over land deals that went wrong — dons his T-shirts, jeans and over-the-top jewellery with pride. And he operates in kind.

Some of Sonko’s top executives do not dare enter through City Hall’s front doors after they found themselves declared persona non grata. His abrasive approach has cowed almost everyone, from county staff to detectives, independent commissions and even senior government officials.

His notoriety for recording conversations and penchant for expletives makes it difficult to have a civil conversation with him. A street-wise politician with popular mass appeal, his tentacles of power stretch from the slums to the highest offices of government.

He has moles in almost every important institution of law, order, and governance, including media houses.

Since taking office in 2017, the governor has faced a barrage of serious allegations, from misrepresenting council business and intimidating city employees to setting up an auxiliary office at his Mua Hills home and rummaging through workers’ desks.

No other leader has scandalised the Kenyan women as Sonko has over the last seven years.

But he denies any wrongdoing. “It’s all bogus and made up. They’re trying to paint me as some sort of tyrant,” he said in a past interview.

But at a time when Nairobi should be touting its rapid growth, which has attracted big global employers, the controversies courted by the man at the helm have left many feeling exasperated.

Internal messages among city staffers, MCAs and their boss detail a pattern of rogue behaviour.

E-mails and murmurs that filter out of City Hall walls reveal a growing frustration with Sonko, who is said to act as a lone agent. He makes several decisions without consulting council teams or the county assembly, for which he has been called out by the Senate.

As it stands, the Nairobi County government is not properly constituted given it has no deputy governor after Polycarp Igathe resigned more than a year ago, citing irreconcilable differences with his boss.

Demoralised staff accuse Sonko of abusing his political power to bully people. His combative style of leadership has ruffled feathers and attracted criticism. He fires those who disagree with him and publicly berates his officers.

The county boss has been caught on camera slapping a journalist who filmed him as he walked into the offices of the Ethics and Anti-Corruption Commission (EACC), which is increasingly turning into his second address.

Incessant reshuffles have characterised Sonko’s stay at City Hall, with the latest one being barely a week old.

Ms Kahiga will still be in charge of the finance and economic planning docket, which she has held on acting capacity since September after Charles Kerich was suspended.

Vesca Kangogo, who is in charge of the environment docket, was also appointed to act as health executive after her predecessor Mohamed Dagane was suspended earlier this year.

Through Director of Communications Elkana Jacob, Sonko justified these and other changes, saying they were aimed at improving service delivery to Nairobi residents.

But Sonko’s wrangles with the Nairobi County Assembly are well documented, with the latest battle being between him and the EACC. Last week, Sonko moved to court to stop the commission from investigating him over corruption allegations.

In his application, the governor claimed he was being persecuted for standing in the way of land grabbers who wanted to illegally acquire public land in Mugoya Estate in Nairobi, and for questioning the fraudulent transfer of Integrity Centre to the EACC.

Sonko’s decision to move to court was in protest to numerous summons by the anti-graft agency, which he termed as malicious, and meant to taint his good reputation and hound him out of office.

Over three months, Sonko has been summoned by the anti-graft agency four times.

“Among all the other 46 governors, aren’t there any others that can be questioned with regards to corruption allegations,” Sonko asked on November 6 when he appeared at the EACC headquarters to answer to various allegations.

The day was, however, marred with chaos as his supporters engaged in running battles with the police.

Sonko’s fight with the former majority leader Abdi Guyo also reared its ugly head following the return of Speaker Beatrice Elachi at the Nairobi County Assembly. The confrontations between the duo led to an ugly show of anarchy and chaos, which threatened assembly operations for a fortnight.

He called for the ouster of Mr Guyo, Majority Whip Chege Mwaura, and Deputy Majority Whip Waithera Chege, saying it was only through a radical overhaul of the Jubilee team at the assembly that the power and money wars at City Hall would be subdued.

He wanted them replaced by Mark Ndung’u, Millicent Mugadi and June Ndegwa, respectively.

“With the new team, I will be able to swim even in the deep end where vest-ed interests run even deeper. With the old confrontational leadership, I was being forced to swim with my hands and legs tied. That could not have been the intent and spirit of the separation of powers,” Sonko said in the letter.

The governor noted that Guyo was part of a court case challenging the decision of the party concerning a decision to appoint Mr Ndung’u.

“It is obvious, through this case, there is a brazen display of arrogance and a sinister motive on the part of the former majority leader to have a stranglehold on the airs of the governance of Nairobi entirely within his sphere of influence,” Sonko writes of Guyo.

The county boss added that he has every right to demand a change in the Jubilee assembly leadership because he is the “senior-most elected Jubilee official in the county”.

In his response, however, Guyo accused the governor of orchestrating division and using goons to intimidate MCAs to sidestep oversight.

“The problem we have in Nairobi is the governor. The chaos in the county assembly is well-choreographed so as not to have proper oversight. There are so many who feel intimidated, but I will not be intimidated,” he said.

The Matopeni/Spring Valley MCA claimed that billions of shillings are being siphoned, adding that although the county can increase revenue collection, it has backtracked from Sh11.5 billion to Sh7.8 billion. He was speaking before the Senate’s Devolution and Intergovernmental Relations Committee last week.

The Auditor-General has flagged the Nairobi County government for failing to produce supporting documentation for close to Sh6 billion spent in the financial year ending June 2019 in its latest report.

Sonko is also embroiled in a court case with former county executive for Education Janet Ouko after he accused her of complicity in the misappropriation of millions of shillings set aside for bursaries. Ms Ouko sought redress in court.

By Josphat Thiong'o and Allan Mungai 2 hrs ago
Premium The 5th: IEBC taking no chances as security increased

By Mate Tongola 14 hrs ago
Igathe, Omanga concede after a tight race in the Capital