With his political future muddled by the “handshake” between President Uhuru Kenyatta and opposition leader Raila Odinga, Deputy President William Ruto has now adopted a new battlefront in the cyberspace.  Increasingly, his postings on social media are turning abrasive, a complete departure from his first Tweet, on July 2011 at 10:32am when he thundered on the social media platform oozing nothing but humility and restraint. “I am attending a leaders meeting of the entire cosmopolitan Isiolo at Kinaa Township,” the tweet read. Eight years later, Ruto’s Tweets have metamorphosed into a political arsenal, doled out at choice hour and which often set the pace of weekend political banter of his legion. With analysts now beginning to draw parallels to the tweeting behaviour of US President Donald Trump, Ruto’s tweets have closed the circle to reflect the flip-flopping, abrasive and confrontational nature of a Kenyan politician. The religious undertones have remained, but the bare-knuckle approach he has adopted in dealing with critics now represents the DP’s messaging has now surged forth. The most recent of his tirades coming against Opposition leader Raila Odinga following the Kibra by-election. He often refers him by his political monikers, Baba, Tinga.

“The ONLY strategy and structure Tinga’s party had which largely succeeded was, violence, chaos, mayhem & terror meted out by organized baba’s militia the same instruments used by terrorists organizations including outlawed groups. How sad they have learnt nothing from handshake,” he tweeted yesterday following the defeat of Jubilee’s McDonald Mariga in the Kibra by-election. “As Kenyans we demand that Tinga, his party unconditionally, unequivocally and publicly RENOUNCE the culture of violence, chaos, terror and gangsterism their signature modus operandi as witnessed in Kibra & unreservedly apologise to victims past and present for their hurt and loss.” Firing first enables the DP control the narrative of whatever is going on, at least in the online community. Instead of waiting for a whole week for a political rally to respond to a rival, he does it real time. Communication expert Dismas Mokua says the DP has decided to take the US President Donald Trump style to engage supporters and counter alleged misinformation. “He is clutching at straws. When he is not happy with what the media reports, he dismisses it as fake news or alternative facts. He has used the Tweets for a while now, to expose or dismiss his critique,” he stated.  He noted that yesterday he used four Tweets to discredit the opponents’ behaviour at the just concluded Kibra by-elections where his candidate McDonald Mariga lost to ODM’s Bernard Okoth. “This was a proxy war, focusing on 2022 General Election and the Handshake.  He put a lot of resources and time, receiving large delegations at his Karen official residences and held two rallies in Kibra. This was indeed a genuine phobia to galvanise the city politics,” he explained the import of the numerous tweets yesterday. 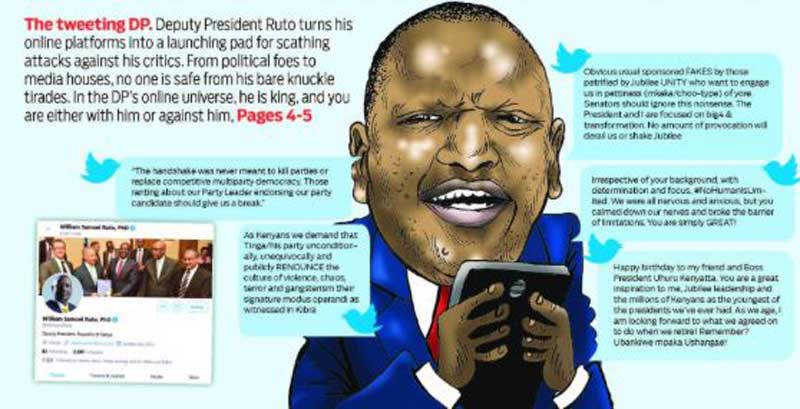 Galvanise city politics Whether he is taking on Raila or Kirinyaga Governor Anne Waiguru, Ruto takes no prisoners in his quick-draw approach. An approach that has in some instances backfired on him, leaving the DP often speaking at cross-purposes with the President. For instance, when President Kenyatta announced that the State has frozen all development projects, Ruto was away from Nairobi soon after launching new projects. Roads, irrigation programmes and breaking ground for educational complexes. Photos are quickly posted, but they always lack crucial elements like where the money to build them will come from and how long the projects will take. As a result, key projects he has launched have either stalled or stagnated. In some instances, contractors move out as soon as his motorcade pulls away. His tweets are not meant for the online community only. Every so often, he uses them to rile up his loyalists.

During the furor surrounding the Kimwarer and Arror dam scandals his tweets were near coded messages for his lieutenants. “Residents living along the Kerio Valley will benefit from these two dam projects that will irrigate 25,000 hectares. We want to transform this region,” read a tweet after the commissioning of the building of the Chesirei Technical Training Institute in Elgeyo-Marakwet. Soon after, Elgeyo Marakwet Senator Kipchumba Murkomen a Ruto ally rehashed this same message at a different political event. “The Kimwarer and Arror dam projects must go on as planned. We will not accept the money to be scaled down in the Arror project … all these projects might delay but one thing I am telling you is, they will be built to completion,” said Mr Murkomen. For Ruto’s men, the orders for their intended political revolution can be found on their patron’s timeline. His online abrasiveness is not limited to the political sphere. Media have become an easy target for him. Any news, that paints the DP in unflattering light is swiftly countered. Sometimes at the crack of dawn. Like American President Donald Trump, he too has adopted the ‘FAKE NEWS’ ‘FAKE MEDIA’ tag, compete with the caps for emphasis. “Obvious usual sponsored FAKES by those petrified by Jubilee UNITY who want to engage us in pettiness (mkeka/choo-type) of yore. Senators should ignore this nonsense. The President and I are focused on big4 & transformation. No amount of provocation will derail us or shake Jubile,” he wrote of a story in one of the local dailies. It doesn’t stop there. “NONSENSE. The politics of personality cults that breed negative ethnicity & division as it poisons our nation are primitive and beneath us. We will agree as Jubilee established as a national movement which elevate our discourse to the realm of IDEAS & ISSUES and not personality,” he said in another tweet on October 18th, reacting to another story. His tiffs with media can be narrowed down to three key issues that give him the most discomfort. First, the ever-emerging splits within Jubilee Party, as witnessed during the Kibra by-elections where a section of legislators under his party campaigned for the rival candidate. Second, the Building Bridges Initiative and the Uhuru-Raila handshake that many interpreted as a move to lock him out of future political contests and the constant linking of his name to land irregularities and linking suspected corrupt government officials to him. “JUBILEE rejects the tsunami-bravado hubris & threats by those pushing for a divisive winners vs losers debate on the BBI. We will encourage sober, inclusive & objective citizen conversation on all proposals to ensure the views of all Kenyans count to create a win-win outcome,” he tweeted on August 27, responding to a story that alluded to the BBI causing rifts within Jubilee. A week earlier, he had thrown another jibe at the Fourth Estate. “This is what constitutes FAKE NEWS. I know it is difficult but newspapers should try selling without the ‘Ruto’ mention. Please! Tafadhali woiye,” he said. His feed is also a stark reminder of what could be. What the country would look like if the promises made to the country by the executive, which he is part of, were kept. “We are investing over Sh80 billion in the next three years for rehabilitation and expansion of sewerage infrastructure in the country; this will increase access to sewerage services to about 40 per cent. In light of this, we are streamlining and restoring the water and sanitation sector to the desired path; notable strides have already been made towards access to water and reasonable standards of sanitation by all but more needs to be done,” he said on October 29. Nairobi, is in the second year of a water rationing programme. At a time when the country is grappling with high costs of electricity, and corruption scandals within the energy sector, his handle has incessant messages on the Last Mile project. “We have dedicated a significant portion of the national resources to rural electrification under the Last Mile Project as part of the Government’s aspirations to achieve universal access to affordable and reliable electricity,” he tweeted yesterday, complete with a beneficiary’s image. Seldom has he addressed these high costs and corruption bedeviling the country. It is not all war though. There are also moments of love and faith in his online interactions, the brightest of these come when Kenyan sportsmen compete on the global stage. “Great performance and beautiful play by Divock Origi to score the winning goal as Liverpool beats Spurs to clinch the Champions league…accolades to Victor Wanyama for playing his part in Spurs’ progress…well played,” he said at the end of the June UEFA Champions League finals. Exhausted all avenues An ally of the DP told Sunday Standard he decided to go full blast online to state the facts and that is why he has of late intensified his communication on social media. “He does his own tweets. Despite making public pronouncements, the Twitter handle has served to reach many people and debunk untruths,” he said. Murkomen adds: “Twitter is the new media. It has no editors and it is unfiltered. He uses it to correct misinformation. The message is sent faster to his supporters across the country.” ODM MP Junet Mohammed says the DP has turned his attention to communicating on his social media handles because of a lack of options. “The tweets by the DP demonstrate that he has exhausted all avenues of communicating.. now he only has the netizens to engage,” Junet said.  Today, social media remains a key alley as he exploits the opportunities that come with social media mass messaging to his benefit. With a single tap of his phone, the Deputy President evokes feelings of hate and love.     [Additional reporting by Roselyne Obala]