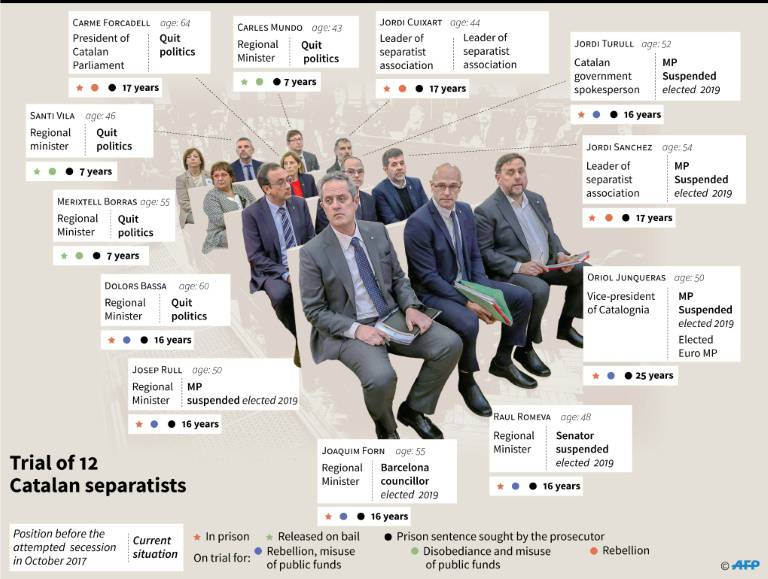 Spain's Supreme Court on Monday sentenced nine Catalan separatist leaders to prison terms of between nine and 13 years for sedition for their role in a failed 2017 independence bid. The long-awaited verdicts were less than those demanded by the prosecution which had sought up to 25 years behind bars for former Catalan Vice President Oriol Junqueras on grounds of rebellion. Spain has been bracing for weeks for the court's ruling, with tension mounting steadily and police sending reinforcements to Catalonia where separatists have pledged a mass response of civil disobedience.

Former Catalan president Carles Puigdemont, who fled to Belgium to avoid prosecution, denounced the sentences as an "outrage." "100 years in all. An outrage. Now more than ever, by your side and those of your families. It is time to react as never before," he tweeted. The 12 defendants, most of them members of the former Catalan government, were put on trial in February for their role in the banned October 1, 2017 referendum and the short-lived independence declaration that followed it. "The Supreme Court condemns Oriol Junqueras to 13 years of prison... on grounds of sedition and the misuse of public funds," the judges wrote in their ruling. In Puigdemont's absence, Junqueras served as the main defendant.

In a letter to his supporters released on Monday, Junqueras said the story was far from over. "To those who are only driven by the will to do harm, we say to them that nothing ends today, you neither win nor convince," he wrote. "We will come back even stronger... and win." - Separatists denounce ruling - Former parliamentary speaker Carme Forcadell was handed 11 years and six months in prison, while five other former ministers in the Catalan government were jailed for between 10 years and six months and 12 years.

Two influential Catalan civic leaders, Jordi Sanchez and Jordi Cuixart, were also sentenced to nine years in prison, while the remaining three leaders, who faced lesser charges, escaped jail time and were each handed a 60,000-euro ($70,000) fine. The government is hoping the long-awaited ruling will allow it to turn the page on the crisis in the wealthy northeastern region where support for independence had been gaining momentum over the past decade. The separatist movement hopes for just the opposite -- that the guilty verdicts will unite their divided ranks and bring supporters onto the streets. - Activists gear up to protest - Activists from the region's two biggest grassroots pro-independence groups, the Catalan National Assembly (ANC) and Omnium Cultural, have urged followers to rally in the evening.

In the coming days, demonstrators will march from five towns towards Barcelona where they will congregate on Friday, when a general strike has been called. Activists from the radical CDR (Committees for the Defence of the Republic), have also promised "surprises". On Sunday they briefly occupied the main train station in Barcelona before cutting traffic on a main avenue of the city. Anti-riot police have been discreetly deployed to Catalonia but the interior ministry has refused to give numbers. For many, the situation has brought back memories of tensions in the street in the run-up to the October 1, 2017 referendum which was marred by police violence, and ahead of the short-lived independence declaration that followed on October 27. In recent weeks, Prime Minister Pedro Sanchez has made it clear that his government will not tolerate any violence, warning he will not hesitate to renew a suspension of Catalan autonomy, as happened two years ago.

The situation is worrying the main Catalan business lobby which said although the verdict would have a "significant emotional impact", it was important the response avoided disrupting "business activity or social cohesion". - Sedition not rebellion - By definition, the most serious charge of rebellion is "rising up in a violent and public manner" to, among other things, "declare independence for part of the (Spanish) territory". Sedition, however, is "rising up publicly and in turbulent fashion" to "prevent by force or in an illegal way" the law from being applied, or the application of an administrative or legal decision. The trial comes just weeks before Spain heads to the polls for its fourth election in as many years, putting the Catalan question once more at the centre of the political debate. Although Sanchez's government is hoping the trial's end might give fresh impetus to dialogue, Junqueras' leftwing ERC party has said it would not be possible without an "amnesty" for "political prisoners and those in exile".