By John Shilitsa | 3yrs ago 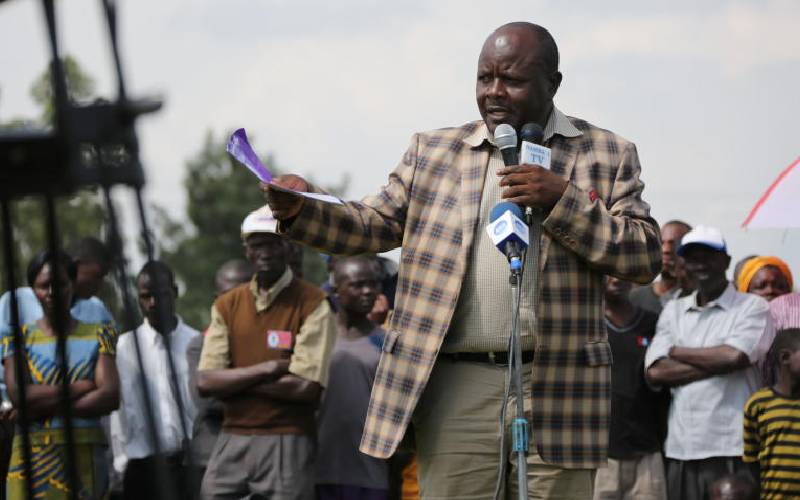 According to Washiali, the recent arrest of Treasury CS Henry Rotich and PS Kamau Thugge over the Kimwarer and Arror dams scandal is a clear pointer to renewed effort to scuttle Ruto’s 2022 presidential bid.

The two were arraigned and released on bond, prompting President Uhuru Kenyatta to appoint Labour CS Ukur Yattani as acting Treasury CS and Dr Julius Muia as his PS.

“Those seen to be front runners in our elective politics are usually targeted by political nemesis through deliberate smear campaigns like in the case of Ruto,” Washiali told constituents at Eshisenye Girls Secondary School.

“In 2013, ANC leader Musalia Mudavadi’s name was dragged into both Goldenberg and cemetery scandals in a deliberate move to clip his wings. Today Mudavadi has become an angel and the focus has shifted to DP Ruto.”

Washiali questioned why Ruto’s critics have been unable to pinpoint the scandals allegedly authored by the DP.

“They decided to implicate him (Ruto) in the Kimwarer and Arror dams scandal because for a long time, they had attempted to make him look bad in the eyes of Kenyans,” Washiali said.

The MP, a close ally of Ruto, took issue with the Judiciary over numerous corruption cases dragging in court at the expense of billions of taxpayers’ money lost in mega scandals.

“Leave alone the fresh dam scandals, those arrested and charged with corruption cases earlier have their cases still pending in court."

He said Goldenberg, cemetery, NYS, Hospital equipment programme and many other scandals must be investigated and those responsible prosecuted.

“We support the war against corruption but not one that targets specific individuals for political reasons,” said Washiali.

Meanwhile, Shinyalu MP Justus Kizito has urged Uhuru to steer clear of the stalemate over the allocation of revenue to counties.

Kizito said the head of state ought to leave the matter with the National Assembly, which is mandated to deliberate on it.

Kenya Airways sinks deeper into losses
Business
By Macharia Kamau
57 mins ago
From Kylie Jenner's lion-head to Brad Pitt in a skirt: 'Extreme' celeb outfits
Arts and Culture
By Kirsten Kanja
2 hrs ago
William Ruto to open MP's post-election seminar in Mombasa
Politics
By Joackim Bwana
2 hrs ago
How Covid-19 made way for big steps in health technology
Health & Science
By Dr Winnie Bore
2 hrs ago
.