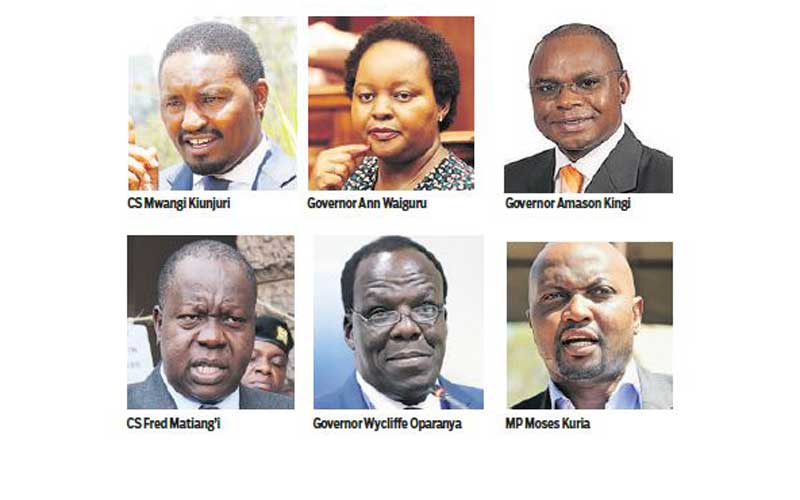 Several Cabinet Secretaries and Governors are jostling among themselves seeking political favour that might propel them into the position of running mate in 2022. With President Uhuru Kenyatta vacating State House in three years, bureaucrats and politicians alike are turning on the charm to appease to contenders with the hope that they might be selected as able number twos. For a presidential candidate, the choice of a running mate is critical and could stand between the contestant and State House.

In the 2013 and 2017 contests, Uhuru and Opposition chief Raila stuck with their running mates William Ruto and Kalonzo Musyoka respectively because of their political influence and networks. Last month, some legislators propped up the name of Agriculture Cabinet Secretary Mwangi Kiunjuri for the number two position and urged him to begin positioning himself for the role.    The law makers sais Kiunjuri’s experience as a legislator and in the Executive has prepared him to play a critical role in the next government. “With Kiunjuri’s wealth of experience in the legislature and executive, it is time he was elevated to another seat. He is better placed to be Mt Kenya’s point man owing to his political experience,” said Laikipia Senator James Kinyua. The CS is among a list of political brides angling to deputise presidential candidates in the 2022 general election.

Top seat Interior Cabinet Secretary Fred Matiang’i, second term governors Hassan Joho (Mombasa), Wycliffe Oparanya (Kakamega), Anne Waiguru (Kirinyaga), Mwangi wa Iria (Murang’a) and Amason Kingi (Kilifi) have all been linked with the position. Political pundits aver that most of those who have declared interest in the presidency are just upping their stakes with the running mate position being the allure. “Running for the presidency is in itself quite expensive and draining, most of those who have shown interest are just saying ‘I am also here, consider me for the running mate position’,” said Javas Bigambo, a political analyst. Last week, legislators in Kisii urged Matiang’i to set his eyes on the top seat, saying he was equal to the task.

The legislators, who included MPs Richard Onyonka (Kitutu Chache South), Samuel Arama (Nakuru West), Vincent Kemosi (West Mugirango), Jerusha Momanyi (Nyamira), Janet Ongera (Kisii) and Senators Eric Okong’o Mogeni (Nyamira) and Sam Ongeri (Kisii) asked Matiang’i to represent the community in the fight for the top seat in 2022. This is the second time in a month that Matiang’i has been prodded to go for the top seat. Similar calls were made in Mombasa early last month during an Eid Il Fitr baraza where politicians at the Coast asked the CS to consider a joint presidential ticket with Joho. Matiang’i has however not declared his interest in any political seat, unlike Oparanya, Joho and Kingi who have publicly said they will aim higher after serving their last terms as county bosses. Kingi and Joho are jostling to become Coast region kingpins. Kingi has indicated that he will form a party to rally the coastal people into one direction. “I am ready and prepared to lead the coast to unity so that we can have a strong negotiating tool,” he said. Oparanya has repeatedly said he will go for the top seat after his final term as governor. “I am equal to the task and I will go for it,” he told Sunday Standard.  But it is the intrigues in Central, a region keen to have one of their own earn the running mate position, that is eliciting a lot of interest. Waiguru, Wa Iria, Gatundu South MP Moses Kuria and former assistant minister Peter Kenneth are some of the leaders that have either expressed interest or have been propped for the seat. “Some presidential candidates have approached me to consider the DP position,” said Waiguru. Kuria has also declared interest in the presidency during the 2022 elections.

‘They are pushing DP to irrelevance’

‘They are pushing DP William Ruto to irrelevance’