Blame Kabogo not me over bizarre Kiambu budget, Waititu says

Politics
“This budget is for 2017/18 done by the previous government and was meant to portray my government in bad light.”

Ferdinand Waititu has defended Kiambu government against claims of adding and funding weird functions to the county financial statement. According to audited financial statements for 2017/18, Waititu allocated monies purportedly for State affairs, retired presidents’ upkeep, South Sudan peace talks and Free Primary Education. He disowned the official county document showing how his government budgeted and spent Sh2.1 billion on the strange functions. Some Sh973.9 million was set aside for coordination of State House functions, but Sh902 million was spent.

The county also spent Sh180 million on the administration of statutory benefits for retired presidents. The State Corporation advisory service gobbled up Sh591.6 million, while another Sh58 million was spent on Kenya-South Sudan advisory. While being grilled by Senate Public Accounts Committee, Waititu pleaded ignorance over the shocking budgetary allocations. Hours later, however, he turned the blamed on his predecessor William Kabogo. In an exclusive interview with KTN’s Lindah Oguttu, Waititu said the budget was drafted by the previous government headed by Kabogo. The Governor denied that the county has spent ‘anything relating to what has been said regarding Sudan and State House’.

He said, “This budget is for 2017/18 done by the previous government and was meant to portray my government in bad light.” “We were elected in August 2017. We started using this budget in November 2017. It is not us who did this budget, it was for the previous government by governor Kabogo.” William Kabogo, a fierce critic of Waititu, did not take it calmly. “Shame on Waititu trying to shift blame. Ask your assembly for this information. I’m not surprised that you got no clue in what is where,” he tweeted. 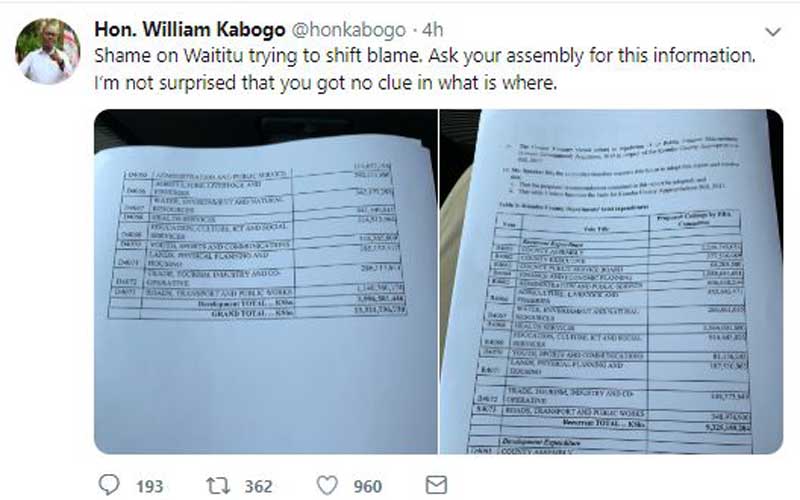 Kabogo added that the Appropriation/Finance Act 2017/18 was a public document available at the Government printer and that Waititu was not being honest. Hard-pressed to make sense of the figures, Governor Waititu said there are different possibilities which explained the document. “This may be a system-generated document. Anything could have happened. It could be a mistake or someone may have put it in our documents to portray our county as being irresponsible,” he said. He added that before the money is spent in the county, the proposal must pass through the Controller of Budget. “Money is not just spent without any checks .... All money spent by the county governments pass through Controller of Budget.”

Meanwhile, State House Chief of Staff Nzioka Waita said: “Just for the record, State House does not share any budgets with the County Government of Kiambu.”