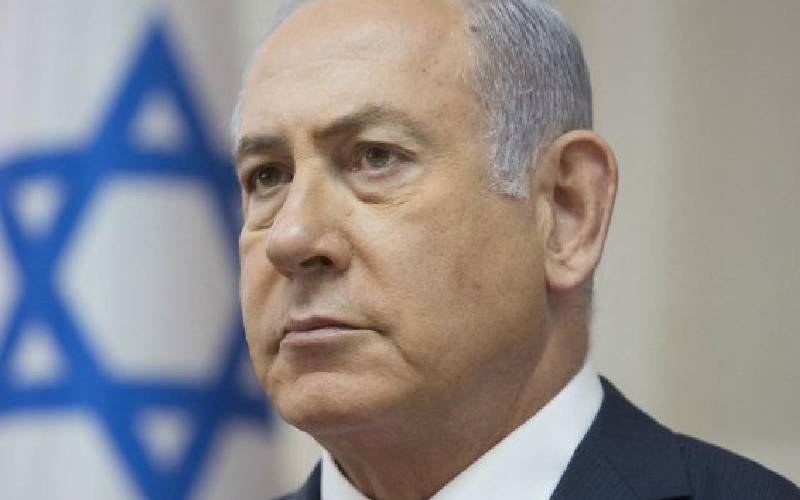 Israelis voted Tuesday in a high-stakes election that will decide whether to extend Prime Minister Benjamin Netanyahu's (pictured) long right-wing tenure despite corruption allegations or to replace him with an ex-military chief new to politics.
The vote is expected to be close and likely lead to frantic negotiations to form a coalition once results are in, with opinion polls having shown Mr Netanyahu best placed to do so.
Polls were to close at 1900 GMT in most areas and exit surveys will be released afterward. Final results were not expected until early Wednesday.

Ex-military chief Benny Gantz has mounted a strong challenge to the veteran prime minister by brandishing his security credentials while pledging to undo damage he says Netanyahu has inflicted on the country with divisive politics. "I'm happy to stand for the good of the citizens on a new path," Mr Gantz said after casting his ballot in his hometown of Rosh Haayin.
"We shall respect democracy and call for a respectful and quiet day from all sides."
Netanyahu voted later in Jerusalem and urged Israelis to "choose well."
"This is a sacred act, the essence of democracy, and we should be thankful for that," he said. "God willing, Israel will win."

The election was in many ways a referendum on the 69-year-old who has built a reputation as guarantor of the country's security and economic growth, but whose populism and alleged corruption have left many ready for change.
He has engaged in populist rhetoric that critics say amounts to the demonisation of Arab Israelis and others.
True to form, PM Netanyahu issued a deeply controversial pledge only three days before the election, saying he planned to annex settlements in the occupied West Bank should he win.
Extending Israeli sovereignty on a large-scale in the West Bank could be the death knell to already fading hopes for a two-state solution with the Palestinians.
It is a move long-sought by Israel's far-right.

Ronit Kampf, a 45-year-old university professor, was among the first to cast ballots at a Jerusalem polling station and said she was concerned by the corruption allegations.
"Bibi has been in power too long," she said, using Mr Netanyahu's nickname.
"There is going to be a big change. What kind of change, I don't know exactly, but there will be a change."
At another Jerusalem polling station, Shahar Levinson, who had arrived with his wife and three young children, said he was voting for Likud and wanted a government that was "right-wing and capitalist."
He also named security as an important concern.
Mr Netanyahu has sought to portray himself as Israel's essential statesman in the run up to the vote and highlighted his bond with US President Donald Trump.
He has spoken of President Trump's recognition of Jerusalem as Israel's capital and of Israel's claim of sovereignty over the Golan Heights, while saying the US leader is aware of his annexation plans.
"Who else can do this? Who can do this? Come on. Honestly," Mr Netanyahu said in an interview on Sunday with local news site Arutz Sheva.
"Who can stand in front of the world? Who can stand in front of the American Congress? Who can move public opinion in that direction?"
At the same time, he has used Trump-like tactics, calling the corruption investigations a "witch hunt" and denouncing journalists covering them.
On Monday night, he visited Jerusalem's Western Wall for a last-minute prayer.
Gantz, a 59-year-old former paratrooper who has formed a centrist alliance, has invoked the corruption allegations against the premier to make his case that it is time for him to go.
He has called Mr Netanyahu's annexation pledge an "irresponsible" bid for votes.
Mr Gantz says he favours a "globally backed peace agreement" that sees Israel hold on to the large West Bank settlement blocs and maintain security control over the territory.
He opposes unilateral moves.
"Israel needs to choose a direction of unification, connection and hope -- or of extremity," Mr Gantz told Israel's army radio on Monday.
He has sought to overcome PM Netanyahu's experience and achievements by allying with two other former military chiefs of staff and ex-finance minister Yair Lapid to form his Blue and White alliance.
Opinion polls have given Mr Netanyahu's Likud and Blue and White a similar number of seats in the 120-seat parliament, with both far short of an outright majority.
If polling trends hold, the prime minister would be best placed to build a coalition thanks to smaller right-wing parties allied to him.
But there have been repeated warnings about opinion polls' unreliability in the past.
Should Mr Netanyahu win, he will be on track to surpass founding father David Ben-Gurion as Israel's longest-serving prime minister later this year.
He has been premier for a total of more than 13 years.
If he does triumph, "King Bibi," as some have called him, faces the prospect of becoming the first sitting prime minister to be indicted.
The attorney general has announced he intends to indict Mr Netanyahu for bribery, fraud and breach of trust pending an upcoming hearing.
He is not required to step down if indicted, only if convicted with all appeals exhausted.