Miguna Miguna remains in police custody despite a High Court Judge ordering his release on Friday. According to lawyer Edwin Sifuna, Dr Miguna was rearrested at the Githunguri police station despite Justice James Wakiaga ordering his release on a Sh50,000 cash bail until the case filed in court is heard and determined. “Miguna has been put back in the Cells a few minutes ago here at Githunguri Police Statipn. It appears orders have come to the local police to defy the High Court release order,” Sifuna posted on social media, Friday. The Raila ally indicated Miguna was moved from Githunguri police station to an unknown destination but within Kiambu County.

“Just as we suspected Miguna was moved overnight from Githunguri but is still within Kiambu County. We have fanned out to various outposts in the County to find him,” Sifuna stated on Saturday. 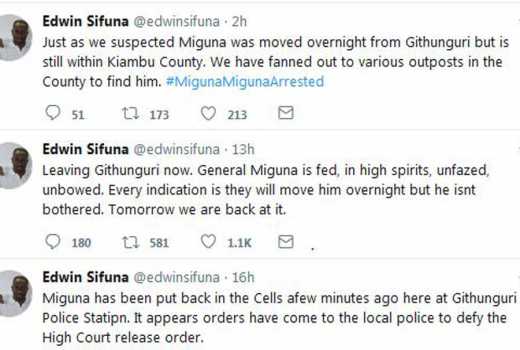 Wakiaga directed Miguna to appear in person on Monday next week and to serve the Inspector General of police (IG) personally. “It is already 3PM and there is no possibility of him being brought to court before the end of the day he be released on cash bail,” Justice Wakiaga said. Makadara Member of Parliament (MP) George Aladwa was arrested from his Buruburu home and taken to Directorate of Criminal Investigations (DCI) headquarters in Kiambu.

The former Nairobi Mayor was a key player in the swearing-in of Raila. Recently, a team of detectives had been set up at the DCI headquarters to investigate alleged illegal activities that took place during the now controversial oath ceremony. Police arrested the vocal lawyer (Miguna) at his Runda home, Nairobi over Tuesday’s ‘swearing-in’ of Raila Odinga as people’s president. The Director of Criminal Investigations (DCI) George Kinoti said that the vocal lawyer was apprehended for administering an illegal oath and being a member of NRM, a movement that has since been outlawed by the Government. “Miguna publicly declared that he is the general of NRM, which is already declared a proscribed group. By the time he declared publicly, there was a gazette notice by the minister. How can we let it go? We are law enforcers,” said Kinoti.

Miguna had on Thursday dared Interior CS Fred Matiang'i to arrest him for administering the oath to Opposition leader, Raila. "Matiang'i if you are looking for me, I am ready and I have been ready since I was a teenager," he said. He further directed NASA supporters to remove all of President Uhuru Kenyatta's portraits from their business premises. "We are ordering NRM soldiers to take down Uhuru portraits from all homes, businesses and every premise they occupy," Miguna said. The outspoken poilitician said the coalition will in due course produce legitimate portraits of "President Raila Odinga". "We will distribute the portraits ourselves. We are going to do it in an organised and fashioned way," he said. Raila was ‘sworn-in’ at the Uhuru Park grounds on January 30. Holding a green Bible to his right arm and sandwiched by his former aide Miguna and Siaya Senator James Orengo, Raila recited his ‘oath of office’ before thousands of NASA supporters that thronged the recreational park. “I Raila Amolo Odinga in full realisation of the high calling to assume the office of the people’s president of the Republic of Kenya, do swear that I will be faithful and bear true allegiance to the people and the Republic of Kenya; that I will preserve, protect and defend the Constitution of Kenya, as by law established, and all other laws of the Republic as adopted by the people of Kenya; that I will protect and uphold sovereignty, integrity and dignity of the people of Kenya. So help me God.” he carefully said. Wiper Party leader Kalonzo Musyoka, however, did not attend the inauguration. Speaking shortly after taking ‘oath’, Raila said the event marks the end of electoral injustice in Kenya, adding that Kalonzo will be ‘sworn-in’ at a later date. Other NASA principals Moses Wetang’ula and Musalia Mudavadi were also missing as Raila ‘took oath’.