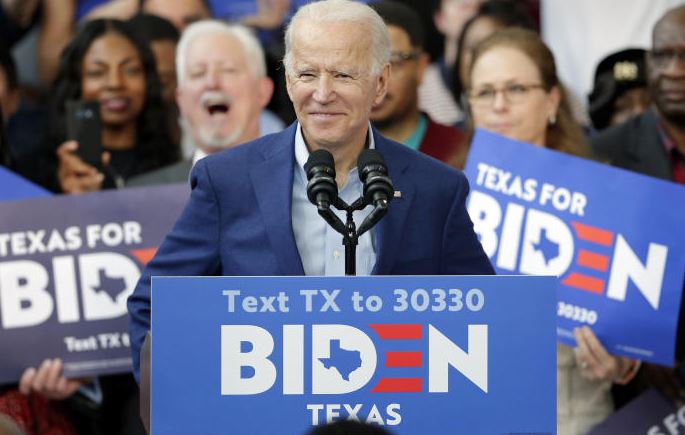 Joe Biden (pictured) has unveiled a $700 billion plan to create jobs and invest in new technologies in a challenge to President Donald Trump on economic policy, as the warring sides clashed in key election battleground Pennsylvania.

This would be the biggest investment in the US economy since World War Two.

The Democratic presented his sweeping “Build Back Better” proposal, a contrast to Trump’s “America first” agenda, during a speech at a metalworks plant in a swing state critical to either candidate’s victory in November poll.

Vice President Mike Pence was also barnstorming Pennsylvania, defending his boss’s handling of the coronavirus and assuring voters that Trump was best qualified to revive the economy.

Biden’s manufacturing and innovation plan aims to bring back positions lost during the pandemic, and create more than five million new jobs by investing in domestic production and research and shrinking foreign supply chains.

“That’s what my plan is, to build back better,” Biden told ironworkers after touring their 101-year-old factory near Scranton, the blue-collar city where he grew up.

The goal, he said, is “to sharpen America’s competitive edge” in new industries such as battery technology, artificial intelligence, biotechnologies and clean energy. “That’s the future.” Biden said he rejects the “defeatist view” that automation and globalisation will sap well-paid US jobs.

“American manufacturing was the functioning arsenal of democracy in World War II, and has to be part of the engine of new prosperity in America now,” he said.

Biden’s plan to protect American workers underscores a recognition that, despite Trump’s poor job approval numbers, voters still see him as stronger than Biden on handling the economy.

But Biden drew a sharp contrast with his billionaire rival, highlighting his working-class upbringing and even making a side-trip to his old Scranton neighbourhood.

Trump won in 2016 largely on a promise to bring back lost manufacturing jobs. Biden accused him of abandoning the working class.

“Trump has simply given up,” Biden said, adding American families are “paying the price for this administration’s incompetence.”

It proposes a $400 billion for domestic product procurement, and $300 billion for research and development and breakthrough technologies including reusable energy and electric vehicles.

“This will be a mobilization of R&D and procurement investment in ways not seen since the Great Depression and World War II,” Biden said. Pence’s arrival in state signaled the White House’s all-out fight for Pennsylvania, which flipped to Trump in 2016 but now leans towards Biden.

“I know, not far from here Joe Biden is at another company, talking about his plans for the economy going forward. And I think the choice has never been clearer for the American people,” Pence told a roundtable in Malvern town.

Biden savaged Trump for being woefully unprepared to respond to Covid-19 that has killed 133,000 Americans, and ignoring the plight of working-class families.

The continent’s most developed country has 238,339 cases overall, more than a third of them in Gauteng.