Queen, Charles and William to work 'at pace' with Harry and Meghan to find 'solution'

The Royal Family has released a fresh statement on Meghan and Harry's plans to 'step back' as senior members of the Royal family .

In it, they revealed how they will work "at pace" in forming a plan on what was yesterday described as a "complicated issue" in a statement from the Queen.

It read: "The Queen, the Prince Of Wales and Duke of Cambridge have directed their teams to work together at pace with the government and the Sussex household to find workable solutions."

Palace sources say the directive is to sort it out "in days not weeks".

A palace source told the BBC yesterday that senior members of the Royal Family were not made aware of their announcement and felt "hurt".

Alongside their bombshell statement, Harry and Meghan also revealed they will dramatically change the way the public learns about their lives.

They will no longer be part of the Royal Rota system, which allows the country's best know royal correspondents exclusive access to official engagements.

Instead, Harry and Meghan will "Engage with grassroots media organisations and young, up-and-coming journalists."

They will also: "Invite specialist media to specific events/engagements to give greater access to their cause-driven activities, widening the spectrum of news coverage."

Their announcement - and a new official Sussexroyal.com website - have thrown up important questions about funding for the couple's round-the-clock security, media access to their royal events and how they will pay for their future lifestyles. 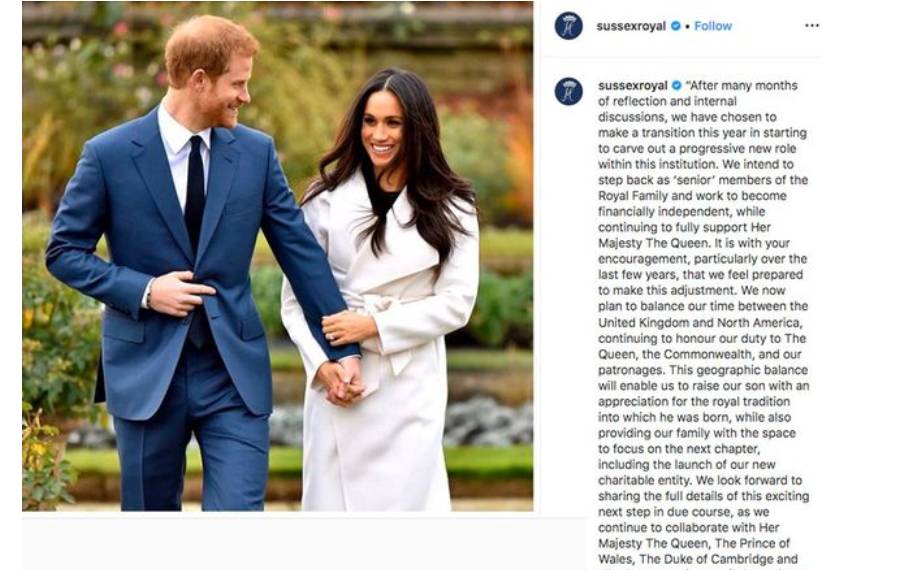 The duke and duchess, who have only recently returned from a six-week stay in Canada with eight-month-old son Archie, said in their statement: "After many months of reflection and internal discussions, we have chosen to make a transition this year in starting to carve out a progressive new role within this institution.

"We intend to step back as 'senior' members of the royal family and work to become financially independent while continuing to fully support Her Majesty the Queen."

Meghan received a public boost from her close friend Jessica Mulroney, a Canadian stylist and TV star, who posted a quote attributed to Gina Carey, which said: "A strong woman looks a challenge in the eye and gives it a wink."

But a series of commentators have strongly criticised their decision with public relations and crisis consultant Mark Borkowski saying about the Sussexes "It does feel like a royal couple in exile".

In final Trump-Biden showdown, less chaos but plenty of clashes

In final Trump-Biden showdown, less chaos but plenty of clashes