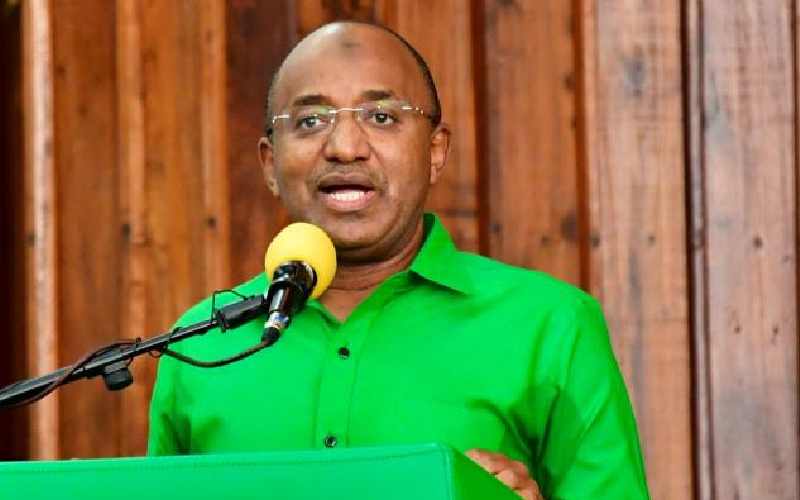 Zanzibar residents were on Tuesday led in the funeral service for Tanzania President John Magufuli in an event attended by Zanzibar President Hussein Mwinyi (pictured).

Mwinyi said Magufuli's death has left great sadness and grief for both Zanzibar and Tanzania citizens.

Zanzibar residents have described Magufuli as one who pushed for unity.

PM Kassim Majaliwa said the body will stay at Amaan Grounds until the last person has viewed it.

Zanzibar marked Tuesday as a public holiday to allow residents to pay their last respects.

Mwinyi thanked them for coming out in large numbers, regardless of religion and tribe, to mourn Magufuli.

He referred to Magufuli as an agent of change, in line with his party Chama Cha Mapinduzi identity, which means the party of change.

The Zanzibar President further praised Magufuli as a rare leader who fought for the weak and had the vision to ensure Tanzania grows using its resources.

"He did all in his power to ensure Tanzania is peaceful and safe as well as guard the country's resources."

Speakers also sent condolence messages to Magufuli's widow Janet, who was visibly grief-stricken at the state funeral in Dodoma on Monday.

She did not attend the funeral service at Zanzibar held at Amaan Grounds.

He added that the body will be transported on a 3km road that Magufuli built, after which the procession will stop at Busisi for 10 minutes.

At a time when many countries are imposing more restrictions to stop the spread of coronavirus, it is business as usual in Tanzania.

Yesterday, thousands of mourners who congregated at the Uhuru Stadium in Dar es Salaam to bid goodbye to the late President wore no masks.

The mourners were led by newly sworn-in President Samia Suluhu Hassan, who did not wear a mask, either.

Other notables were Magufuli’s widow Janet and popular musician Diamond Platinumz and his entourage, as well as the military.

At the 23,000-capacity Uhuru Stadium, only a handful, led by church leaders, wore masks, a reflection of how the late Magufuli’s canons on Covid-19 were deeply entrenched in the citizenry.

Magufuli, who died this week, had declared Tanzania “Covid-free” and would later express doubt on the safety of masks and vaccines.

He was an avowed Covid-19 skeptic who urged Tanzanians to shun mask-wearing and denounced vaccines as a Western conspiracy, frustrating the World Health Organisation (WHO) efforts to contain the pandemic.

He instead advocated traditional medicine and faith healing.

Magufuli at one point sent papaya and goat meat samples to be tested for Covid-19 and used the results to justify his denial of the virus.