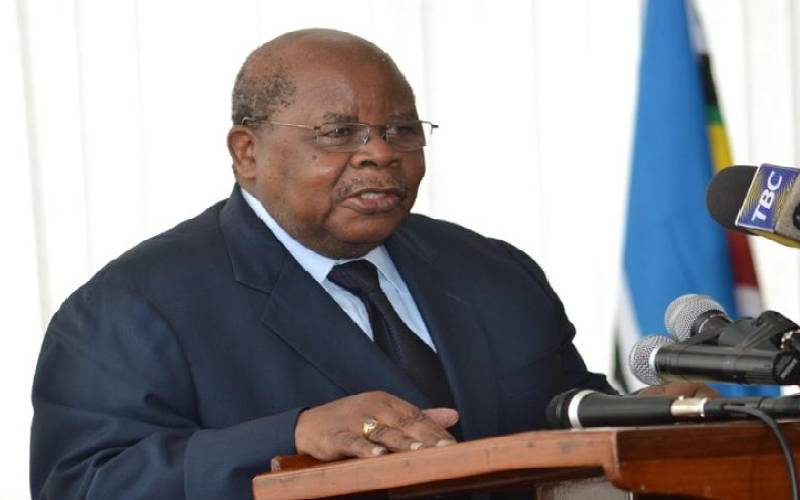 Tanzania’s former president Benjamin Mkapa who served as the third Head of State of the East African nation has died; President John Magufuli has announced in a televised broadcast from Chamwino State House in Dodoma.

Mkapa (pictured above), a regional peacemaker led Tanzania for 10 years between 1995 and 2005 and has died at 81 in a Dar es Salaam hospital. In his brief address, President Magufuli has referred to Mkapa’s death as a great loss to Tanzania.

‘’I am saddened by the death of Benjamin Mkapa, the third President of Tanzania, I will remember him for his dedication to the nation and the growth of the economy,’’ Magufuli said.

Mkapa was last seen publicly in high spirits on July 11, 2020, during Chama Cha Mapinduzi National Congress in Tanzania’s capital Dodoma where President Magufuli who was also present was fronted as the party’s flagbearer in the coming elections. Former presidents Jakaya Kikwete and Ali Hassan Mwinyi also attended the meeting.

The former Head of State will be remembered as an indefatigable peacemaker in the East African region and Africa. He was involved in different peace processes.

When Kenya was on the brink of the precipice after a controversial presidential election in 2007, Mkapa together with other African leaders helped Kenya broker a peace deal that culminated into the formation of a coalition government.

Kenyans will remember Mkapa for his instrumental role, as one of the eminent persons together with former UN Secretary-General Kofi Annan and Graca Machel, in mediating talks between Raila Odinga’s ODM and Mwai Kibaki’s PNU after the country erupted in violence following the disputed 2007 elections.

They will also recall his oratory in Kiswahili whenever he would address them as a guest of the State during public holidays. He would start by saluting them "WaKenya Mpo?" and they would roar back tupo Imara.

His last assignment in Kenya was to represent President Magufuli at the burial of Kenya's second President Daniel arap Moi in February.

It was through their tireless efforts of Mkapa and the eminent person that the warring parties signed the National Accord in February 2008 saving the country from sliding into further anarchy after three months of violence after Raila-led ODM rejected Kibaki's presidential victory with violence flaring up in the Rift Valley, Nyanza and Mombasa.

Mkapa, serving as a Foreign Affairs Minister between 1977 and 1980, also played a key role in encouraging the United Nations sanctions against apartheid South Africa as a punishment for its occupation of Namibia.

Continental leaders have eulogised him as a son of Africa, a public servant with a great legacy of public service and integrity.

Moussa Faki Mahamat, African Union Commission Chair has mourned the late former President as a statesman who will be remembered for his peace efforts in the region.

‘’Mkapa leaves a great legacy of public service with integrity, My heartfelt condolences to the family and Tanzanian people’’, tweeted Kizza Besigye.

Kenya’s opposition leader Raila Odinga has mourned the former Head of State a great friend of Kenyan people, a pan-Africanist and a global statesman.

‘’Mkapa believed in Regional integration and championed the revival of the East Africa community. Africa has lost a giant,’’  Raila's statement read.

A former journalist, Mkapa was both the president and the chairman of the long-ruling Chama Cha Mapinduzi.

He was born on November 12, 1938, in Ndanda, southern Tanzania, and is survived by Children: 3 three children and his spouse Anna Mkapa.

He is the author of My Life, My Purpose: A Tanzanian President Remembers, The Mkapa Years: Collected Speeches.

South Africa’s women’s cricket team are going into a training camp on Sunday in the hope of getting government permission to travel to England for...