I am coming back to face Magufuli, says Lissu 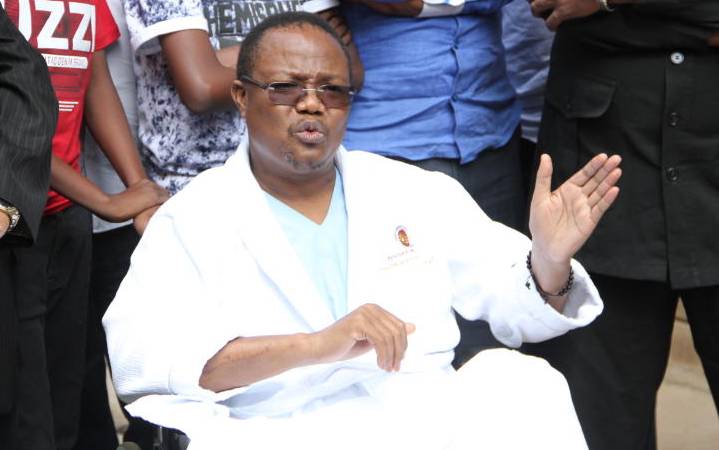 Tanzanian firebrand politician Tundu Lissu (pictured) above) has announced his return to his motherland from Belgium years after he survived after unknown people pumped him with bullets.

The opposition leader spoke to Standard Digital from Berlin, Germany where he had briefly visited his relatives and friends, noted that he will be landing back home on 28 July.

‘’I will land in Dar es Salaam, I have already bought my air ticket and I am determined to go back home,’’ said Lissu.

Mr Lissu who lost his Singida East parliamentary seat in 2019 due to ‘prolonged absence from parliament without informing the house speaker’ has been away since January 2018, receiving treatment in Belgium hospital after surviving an assassination attempt at his Dodoma home in September 2017.

“I will come back, whether they like it or not,” the outspoken politician said while recalling the September 2017 attack that left him with sixteen bullets but still breathing. Lissu said nothing or nobody would stop him from returning to his home country.

‘’They tried to kill me, I am stronger than before,’’ he said.

Tanzania reopened its airspace in May 2020  to commercial, diplomatic, aid, emergency and special mission flights.

According to the Tanzanian government, there is no Covid-19 in the East African nation.

President John Magufuli has been vocal, urging Tanzanians to ignore rumours that the nation is overwhelmed by the coronavirus pandemic and that prayers have seen them defeat the deadly virus disrupting the global community.

However, Lissu said he disagrees strongly with Tanzania government decision to reopen the economy early ignoring all public health guidelines issued by the World Health Organization on the pandemic.

‘’Coronavirus is there and its killing, in the region and Tanzania at large, the diversionary approach taken by President Magufuli is making things worse, he has opened schools, bars and even disco places, everything is going on normally in Tanzania. In a world hard hit by a deadly virus, he thinks if he doesn’t release corona updates the virus will disappear,’’ he said.

CHADEMA leaders, both Mbowe and Lissu are fierce critics of Magufuli. Mbowe recently criticised the president’s handling of the coronavirus pandemic, saying the head of state is in a ‘’state of denial’’. The opposition party national chair also accused the government of not being transparent about the real situation of the pandemic.

The authorities in Tanzania have not released official figures on the extent of the outbreak in the nation since late April.

‘’We have been dealt with for five years, our party officials have been kidnapped, others have been jailed, Magufuli doesn’t want opposition,’’ he said.

Lissu lamented that Magufuli’s dream to see a dead opposition in Tanzania is an impossible one.

He further added that ‘’Despite the violence, threats and jail terms, CHADEMA remains stronger than ever’’.

Opposition leaders have recently been attacked and arrested. Freeman Mbowe, a high-profile critic of President Magufuli and CHADEMA chair was ambushed by unknown assailants as he returned home from the capital Dodoma in June, just months before the elections.

The main opposition party has flagged off the race for those interested in running for the presidency of Tanzania on the party’s ticket ahead of the General Elections in October 2020.

‘’I am confident enough that Chadema will front me as the party’s presidential flag bearer just the same way they did when they elected me Chadema’s Vice-chair while still away,’’ Lissu said

Mr Lissu is among 11 cadres who submitted letters expressing their intention of seeking nomination to run for the presidency.

The party’s presidential aspirants will be required to seek at least 100 sponsors from ten regions across the country.

Chadema has never had the opportunity of ruling the Swahili-speaking nation, and main opposition presidential flag bearer in the October polls will square it out with the incumbent John Pombe Magufuli, who has before categorically stated his disinterest in staying in power. Tanzania operates in a democracy that has seen presidents come and go.

Magufuli, locally referred to as ‘’Bulldozer’’ will be seeking for a second and final term in charge of the second-largest economy in the East African region with a Chama Cha Mapinduzi ticket. He came to power in 2015 after the exit of former President Jakaya Mrisho Kikwete.

Unlike in 2015 where Chadema joined hands with other parties opting for a coalition Umoja wa Katiba ya Wananchi (UKAWA) with Edward Lowassa as the frontrunner, political commentators argue that 2020 polls might be a walkover for President Magufuli if opposition parties won’t forge a strong alliance with one flag bearer.

The former premier through the opposition party garnered over six million votes in the 2015 presidential election.