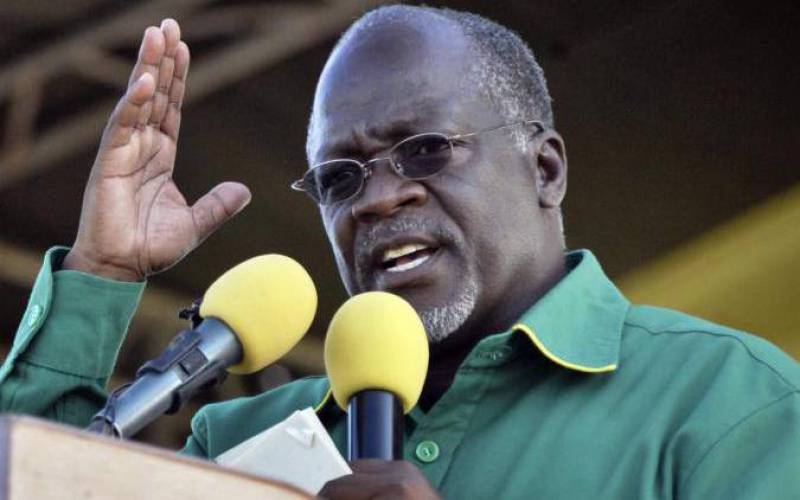 Tanzania President John Magufuli (above) on Sunday announced that his government would not shut down places of worship over the highly contagious coronavirus that has so far claimed 14,746 lives worldwide.

According to Magufuli, these are the only places where true healing can be found.

“These Holy places are where God is. My fellow Tanzanians, let us not be afraid of going to praise Him,” he said

Magufuli went ahead and told a congregation in Tanzania where he had attended a church service that the Covid-19 virus is Satanic and cannot survive while in the “body of Christ”.

Samia and free speech in Tanzania

“Corona cannot survive in the body of Christ, it will burn. That is exactly why I did not panic while taking the Holy communion,” he said while the congregation cheered.

Magufuli has however been on the receiving end of social media criticism for allegedly misleading his people to assemble in churches and mosques, which puts them at a higher risk of contracting and spreading the deadly virus.

Opposition leader Zitto Kabwe criticized his comments via his Twitter account urging Magufuli to close all mosques and churches as a way of adding measures to curb the rapid spread of coronavirus.

Magufuli’s comments came as its neighboring countries expanded their restrictions to reduce the spread of the virus.

In Kenya, the government suspended all its international passenger flights and stopped public meetings including religious gatherings and weddings, restaurants only opening for takeaways, matatu’s were instructed to observe the directive of reducing the number of passengers as well as shutting down all the bars indefinitely.

In Rwanda, the government suspended all arriving and departing commercial flights for an initial period of 30 days and also temporary shutting down of schools, universities, and places of worship for two weeks, as well as stopping court proceedings and inmate visits amid concerns about the spread of Covid-19.

Coronavirus cases in Tanzania so far stand at twelve.