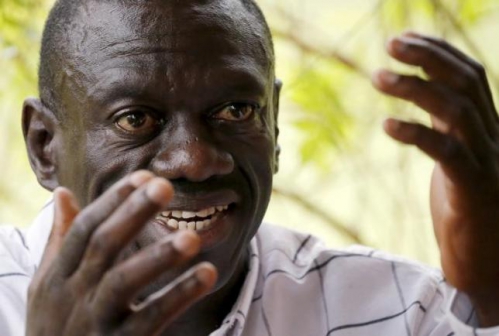 Ugandan opposition figure Kizza Besigye was charged with treason late on Friday for declaring himself president and challenging the election victory of veteran leader Yoweri Museveni, officials from both camps said.

The charge - which carries the death penalty - marked an escalation in recent confrontations between the government and Besigye who has been repeatedly arrested and accused authorities of beatings and intimidation.

Tensions have mounted since the disputed February poll and authorities this week blocked Facebook, Twitter, Whatsapp and other social media, saying they were worried about security around Museveni's official inauguration on Thursday.

Government spokesman Shaban Bantariza said Besigye had been charged with treason because he had declared himself "an alternative president".

"He has openly declared his intention to topple this government, that's not constitutional," he said. Authorities have dismissed accusations of targeting Besigye, saying they have only acted to keep order.

Besigye was arrested in the capital Kampala on Wednesday, on charges of addressing an illegal assembly and was taken to Moroto town, 500 km (300 miles) away near the border with Kenya.

"He was charged with treason yesterday (Friday) in Moroto magistrates' court and remanded to prison," Semujju Nganda, an opposition legislator and spokesman for Besigye's Forum for Democratic Change (FDC) party told Reuters.

A party official told Reuters on Wednesday there had been a ceremony when their candidate was sworn in as president.

Official figures showed Museveni, in power since 1986, secured another term with 60 percent of the vote, trailed by Besigye with 35 percent.

Besigye rejected the results, calling the poll a sham and demanding an international investigation. He has been mostly confined to his house since Election Day on Feb. 18.

Museveni, 71, is credited with restoring order to the east African country after years of chaos. But experts say the growing economy has not kept up with a rising population, while critics complain about corruption and a clamp-down on dissent.

Besigye was also charged with treason in 2005, but a judge dismissed the case saying the evidence was insufficient.