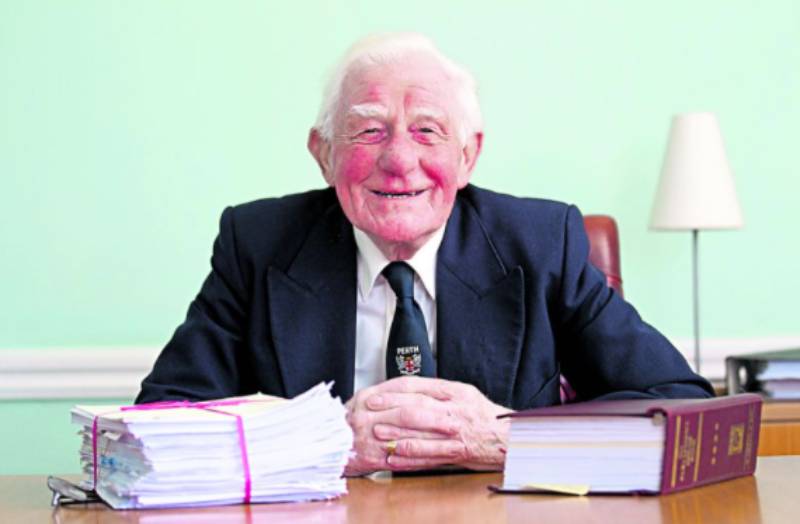 The world’s most loyal employee – who worked at the same law firm for 84 years – has died.

John Burns (pictured) was 98 and still working at TC Young Wilson Terris, in Edinburgh, the firm he joined as a 14-year-old.

He’d spoke of retiring weeks before his death, but hadn’t got round to it.

He was still hand-delivering legal documents, bound in ribbon, around the Court of Session.

John missed out on Guinness World Records for the longest career in the same company - but only because he was serving his country during the Second World War and broke his continuous employment.

The record is held by Walter Orthmann from Brazil at 81 years and 85 days. But John's continuous service was broken during the Second World War.

John, a grandad from Meadowbank, Edinburgh, died in his sleep last month, shortly after celebrating his birthday.

His daughter-in-law Nancy Burns, a nurse, said: "He lived for his job and was often seen running for the bus in the morning."

John started work with the firm - then called Laird & Wilson Terris - in 1936 aged 14 after passing a test in English and maths. He held a variety of jobs, including office messenger, cashier and legal messenger.

That last job saw him hand-deliver legal documents, bound in ribbon, around the Court of Session.

His son, David, 59, revealed he had gone for two interviews, one with the law firm and the other as a copy boy with a newspaper. He said: "The law firm offered him a place straight away and he took it, but the loss was undoubtedly newspapers'."

His only time off was when he joined the Royal Air Force as a radio operator in West Africa, listening out for German submarines.

The dad of two and grandad of five was heartbroken when his wife Catherine died from motor neurone disease 12 years ago. He walked 20 miles of the West Highland Way to raise funds for research.

David said: "Dad found the funny side in everything and when life got bad he would shrug his shoulders and say: You've got to get on with it.'"

John's other great passion was football, and he saw his beloved Hibernian finally lift the Scottish Cup for the first time in his lifetime in 2016. "He was ecstatic", said David.

"That was after saying he would never live to see it."

Every Friday after work he went for a pint or two of Tennent's in his favourite pub, the Auld Hundred in Edinburgh.

At 90 he climbed Arthur's Seat, egged on by his grandson Ewan, 19, who said: "Grandad said he would never make it, but as he reached the summit everyone cheered.

"He never wanted to grow old, preferring instead to be eternally upbeat and funny. Lockdown took him away from the daily routine of work and John reluctantly decided to retire.

"He must have watched every war and western movie during those months in the house and he was not comfortable taking furlough for not working," said David. "He thrived on the company of other people."