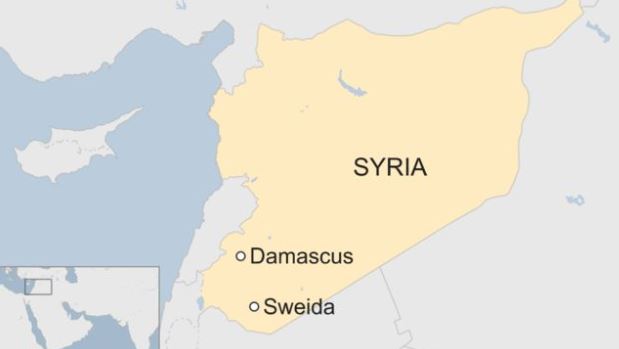 The attacks took place in and around the government-held city of Sweida, state media and monitors reported. The Islamic State (IS) group is believed to be behind the violence.

At least another 30 people were wounded, said the Syrian Observatory for Human Rights, a monitoring group.

The Syrian government has retaken control of much of southern Syria in recent months.

The observatory reported a string of attacks in the city, south of the capital Damascus, and elsewhere in the province.

"Three bombers with explosive belts targeted Sweida city alone while the other blasts hit villages to the north and east," it said in a statement.

State news agency Sana reported one suicide attack in Sweida and said security forces chased and killed two other attackers before they could blow themselves up. Militants also attacked three villages north-east of the city, it said.

The report gave no casualty figures but said a number of people had been "martyred".

State TV also said government forces were "targeting positions of the Daesh (IS) terrorist group" in countryside to the east of Sweida.

The Syrian military, backed by Russian forces, recently launched an operation to drive rebel from their remaining strongholds in the south-west.

At least 270,000 people have fled their homes in the region as fighting continues, the UN says.

"If you look to the players that Chelsea and Liverpool have in the pre-season, especially these two teams, also Arsenal, if you compare, you see the difference