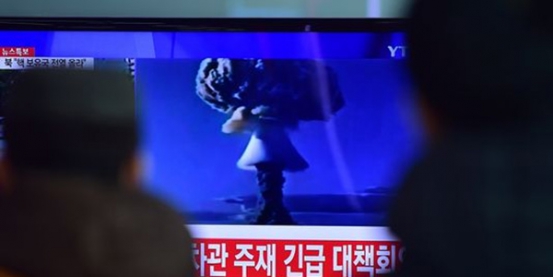 Seoul: South Korea is in talks with the United States to deploy US strategic assets on the Korean peninsula, a South Korean military official said on Thursday, a day after North Korea said it successfully tested a hydrogen nuclear device.

The United States and weapons experts voiced doubts the device was as advanced as North Korea claimed, but calls mounted for more sanctions against the isolated state for its rogue nuclear program.

The underground explosion angered China, which was not given prior notice although it is North Korea's main ally, pointing to a strain in ties between the neighbors. The test also alarmed Japan and the White House said Prime Minister Shinzo Abe agreed with U.S. President Barack Obama in a telephone call that a firm global response was needed.

A South Korean military official told Reuters the two countries had discussed the deployment of U.S. strategic assets on the divided Korean peninsula, but declined to give further details. After North Korea last tested a nuclear device, in 2013, Washington sent a pair of nuclear-capable B-2 stealth bombers on a sortie over South Korea in a show of force.

At the time, North Korea responded by threatening a nuclear strike on the United States.

South Korea, technically in a state of war against the North, said it was not considering a nuclear deterrent of its own, despite calls from ruling party leaders. The United States is highly unlikely to restore the tactical nuclear missiles it removed from South Korea in 1991, experts said.

The United States is also limited in its military response for fear of provoking an unpredictable regime in Pyongyang, said Anthony Cordesman, a defense policy expert at the Washington-based Center for Strategic and International Studies think tank.

"Any escalation in this region, any over-reaction can easily lead to not only a conflict between South and North Korea, but drag China and the United States and Japan into a confrontation," as well, Cordesman said.

Hours after the latest nuclear test on Wednesday, the U.N. Security Council said it would work immediately on significant new measures against North Korea. Diplomats said that could mean an expansion of sanctions against Pyongyang, although major powers might baulk at an all-out economic offensive.

In the United States, Republican presidential candidates seized on the test to accuse Obama of running a "feckless" foreign policy that enabled North Korea to bolster its nuclear arms capabilities.

U.S. congressional sources said Republican leaders of the U.S. House of Representatives were considering a vote as soon as next week to impose stiffer punishment on foreign companies doing business with Pyongyang.

North Korea has a long history of bellicose rhetoric against the United States and its Asian allies without acting on it, but Pyongyang's assertion that it had tested a hydrogen device, much more powerful than an atomic bomb, came as a surprise.

North Korea also said it was capable of miniaturizing the H-bomb, in theory allowing it to be placed on a missile and potentially posing a new threat to the U.S. West Coast, South Korea and Japan.

"The initial analysis is not consistent with the claim the regime has made of a successful hydrogen bomb test," White House spokesman Josh Earnest told reporters.

North Korea called the device the "H-bomb of justice", but its state news agency also said Pyongyang would act as a responsible nuclear state and would not use its nuclear weapons unless its sovereignty was infringed.

The impoverished state boasts of its military might to project strength globally but also plays up the need to defend itself from external threats as a way to maintain control domestically.

Hydrogen bombs use a two-step process of fission and fusion that releases substantially more energy than an atomic bomb. However, it will likely take several days to determine more precisely what kind of device Pyongyang set off as a variety of sensors, including "sniffer planes", collect evidence.

A U.S. government source said Washington believes North Korea had set off the latest in a series of tests of old-fashioned atomic bombs.

The size of the latest explosion was roughly consistent with previous tests and occurred in the same location as earlier tests.

The United States had been anticipating a North Korean nuclear test for some time, with intelligence indicating possible preparations such as evidence of new excavations of underground tunnels at the site.

Jeff Baden, Obama's former top Asia adviser and now a senior fellow at the Brookings Institution think-tank, said the test could have as much, or possibly more, to do with China as the United States.

"China's leadership has concluded that they have to do something to build ties with North Korea, that they have sunk too low - what the North Koreans want to signal is that if we're moving toward normal relations, its on our terms not yours.

"The long term message to the U.S. is we're building a nuclear program because we regard that as the only way we can stand up to you in the Korean peninsula."

Premium Our son has made us proud, Wafula Chebukati's parents speak
Western
By Martin Ndiema
2 hrs ago
KWS: Why vasectomy on Nairobi lion was best decision
National
By Brian Okoth
2 hrs ago
Elderly man inflates hospital bill to get extra cash from children
NEWS
By Collins Kweyu
3 hrs ago
Why we must remain vigilant for terror threats
Opinion
By Kithure Kindiki
3 hrs ago
.

By Martin Ndiema 2 hrs ago
Premium Our son has made us proud, Wafula Chebukati's parents speak