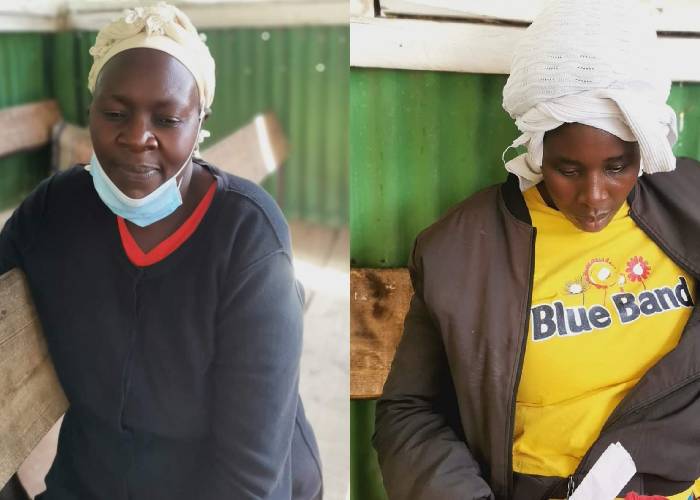 Two women accused of stealing a newborn baby boy before altering the birth notification details were on Monday charged at Webuye Law Courts.

Judith Ingahitzu, 47 and her aunt Florence Musimbi, 62, pleaded guilty to two counts including acts that promote child trafficking before changing their plea through a lawyer.

Bond ruling will be made on October, 25.

The suspects were arrested in Kakamega County on October, 15 detectives, acting on a tip-off.

According to witnesses, the suspects posed as Good Samaritans out to help the victim before stealing the baby.

The Directorate of Criminal Investigations (DCI) dispatched a team of detectives to Kakamega's Matete area which pounced on Ingahitzu at their rural home lulling the stolen baby.

After grilling, the suspect's husband disowned his wife, saying he was not aware she was expecting until she came home with a day-old infant.

According to DCI, the suspect had altered the birth notification using a whiteout, and entered the parents' names by hand using a ball pen.

She confessed to not giving birth after DNA tests run at a different hospital in Kisumu contradicted her allegations.

After intense questioning, Ingahitzu named his accomplice who was arrested at Kikuya village in Vihiga.

Police established that the suspects hatched the plot to steal a baby early this year.

Musimbi reportedly approached an expectant teenage girl living with her grandmother at Vihiga's Kaimosi area and offered to help her secure a job in Nairobi.

"She had then approached the girl with a job offer as a house help in Nairobi, which the helpless minor accepted at once," said DCI.

She connected the unsuspecting teenager to a family living in Kajiado's Ongata Rongai and told her never to reveal she was expectant.

Musimbi later instructed the teenage girl's employers to release the girl back to her as soon as she was due for labour.

It was during her delivery at Vihiga Health Centre when the two arranged and stole the baby from the helpless mother.

Musimbi allegedly altered the documents before disappearing with the baby as her aunt took the girl in circles as to the whereabouts of the newborn child.

Detectives reunited the teenage mother with her baby over the weekend.

The sacrifices of thousands of unsung heroes shone the light for a brighter tomorrow. And for this, they should never be forgotten.

By Osinde Obare | 18 hours ago