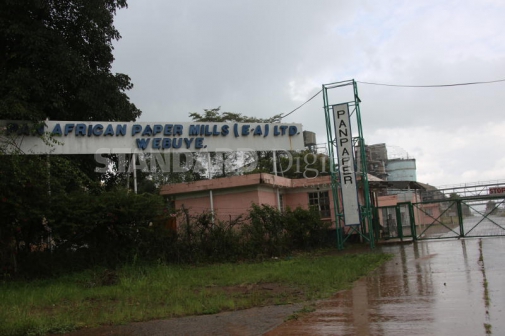 Families occupying Webuye Pan Paper Mills staff houses have been ordered to vacate ahead of the much awaited reopening.

A letter signed by Finance Officer George Muigua instructed the occupants to leave within 30 days. “As you are aware, the company is in the process of reviving its operations. For this reason, it has become necessary for us to take possession of all the company’s houses as they are required for accommodation of employees,” reads part of the letter.

“We are therefore, requesting you to make alternative accommodation arrangements and hand over the house within the next 30 days from the date of this letter.

At the same time, you are required to clear your electricity and water bills and obtain a clearance certificate from respective service providers.”

But the vice chairman of the Kenya Union of Printing, Publishing, Paper Manufacturers and Allied Workers Stephen Watiti, said contract terms indicated that former employees will stay in the houses until the factory is reopened.

“We will seek legal assistance if our former employees are moved out of office because it will be against our agreement,” said Mr Watiti.

Ms Linet Limbe, whose late husband worked at the factory is among the 25 families facing eviction; she wants the new management to give them more time. “I do not know where I will go with my four children. This is the only home we have known since my husband died,” said Limbe.

Watiti said so far 200 former workers have been recalled to work at the factory on temporary terms.

He said the factory had 2,500 workers and he is hopeful they will be recalled to work at the factory now under new management. He added: “As a union, our position is that our members are on leave and immediately the factory reopens they will resume work. When the factory closed down it had 30,000 employees, although some have since died.”

Bungoma Governor Kenneth Lusaka occupies the house that belonged to then Managing Director. Mr Lusaka, however, is not among those affected. He said people who ‘invaded’ the houses are the ones issued with the notice. “When the factory closed outsiders went at the staff quarters to rent houses and they are the ones supposed to leave. Those who have been absorbed to work at the factory will continue to stay in the houses,” he said.

Rai Group of Companies took over the Sh18 billion worth of assets owned by the factory. When the factory shut down in 2009, the management left behind 838 rental houses for its low cadre staff at National, Chocolate and E-quarter estates. The management also left self-contained houses, a guest house in Webuye with 40 rooms and 40 VIP houses.

Tens of acres of land under trees that served as raw material, recreational site Pan Paper Stadium and Pan Paper grounds in Lugari are among some of the facilities left behind.

But as ‘workers’ are fighting to stay in the houses, the business community in Webuye hopes to reap big when the factory reopens.

“We are working on restoring water to start off work immediately because we have raw materials,” said Rai Group of Companies General Manager Chowdary Venkanna.

Already, the new management has reconnected electricity and water at the factory. Machines and boilers are being replaced ahead of reopening mid this month.

Jothan Katiyi, a wholesale trader at Sango Shopping Centre next to the factory, recalled the town’s more prosperous era.

The trader now plans to sell a portion of his farm to restock his shop in anticipation of the factory’s reopening.

In May, the Government announced that the new investor would pump in Sh6 billion to reopen the factory after buying it at Sh900 million from the receiver manager and lenders.

Party hopping not healthy for democracy

MPs have been fighting to delete a section that outlaws party hopping in a report by the joint Parliamentary Select Committee on electoral reforms. This is quite unfortunate. The arguments put forth by the legislators sound convincing only if you fail to take into account compelling reasons why these last-minute defections are an impediment to democracy.

By John Shilitsa | 2 days ago