A long time ago, around a century ago, there was a tribe travelling along the River Nile. As they travelled, they engaged in everything nomadic communities are into; grazing, raiding and trading. Everything was fine and dandy until there was a smallpox outbreak while in Ethiopia. The outbreak wiped out the whole community leaving only a mother and her 2 sons.

As the mother wasted away, probably due to old age, she in her wisdom decided to share her wealth with her sons. Her wealth at the time was beads and leather.

The other son took the leather which in maa language is Samburr leading to the Samburu tribe.

That was the gospel according to Joseph Bilaa, a Samburu community junior elder who was so kind to show us around one Samburu village located inside the Samburu Game Reserve.

Boys to men: A modern cut with Samburu touch

Farmers and Artisans Market a hit at Mombasa

However according to James Ntopai, the inhouse naturalist at the Samburu Intrepids, the Samburu originated from Sudan. They along with the Maasai, Lshamus and the now extinct Laikipiak migrated down from Sudan, with the Samburus choosing to remain on the Northern part of kenya while the others journeyed south.

The history of the Samburu is a perfect mix of myth and historical events that blend into a fascinating tale. One that Joseph is only too glad to tell. The metallic ring plates on his beaded jewelry jingle as he animatedly continues to narrate the story of his people. I would love to have that beaded piece of art on my neck, I mused.

“The Samburu people move for three reasons,” he interrupts my thoughts.

Water and pasture are the two expected reasons, them being pastoralists and all. But it is the third reason that had us intrigued.

“We also have to move when someone dies,” he says with finality. “We take the body out to the bush so the hyenas and vultures can feed on it.”

“If after 2 nights the body is yet to be taken, we assume that the person was so bad that even nature does not want to take it, so to prevent bad luck, a goat is slaughtered, the blood and fat is spread on the corpse to attract the animals,” Joseph explained.

Despite their superstitious practices, the Samburu are now predominantly Christian. Although that does not stop them from being polygamous. According to Joseph, their culture allows them to marry as many wives as possible.

However with the increased cost of living, many of the men are forced to settle for one wife.

“We have to pay for pre-school and high school fees as well as uniform, which is a strain when a man has many kids,” he regretted. Joseph was a victim of this ‘forced monogamy’ tide which seemed to have swept through the villages.

Monogamy notwithstanding the men in the society are not without their indulgences. While the male Samburu will go through 4 stages in his life, he will almost always end up being an elder long after his moran days are gone.

After circumcision, the young male joins the elite group of morans with whom he will hunt, raid and protect the people.

By the age of 25, the moran will have outlived his usefulness on the battlefield and is required to settle down. A wife and kids elevate the man to junior elder status, one that involves the labourous task of attending meetings and adding their voice to the issues affecting the community.

After hitting the 45 year mark, the Samburu man can now join the wise circle of senior elders. A circle that decides, deliberates and punishes.

The women on the other hand lead pretty much a similar lifestyle from childhood. Build houses, fetch water, bear and raise children, cook for the family and with the remaining time left, make exquisite jewelry using beads.

If an unmarried woman is impregnated, she is exiled for a year out of the village. She may find shelter among friendlier villages or relatives. After a year is up, she may return to her village and who knows, she might just get a mate.

So what happens to the man responsible, we ask.

“Nothing! The man did nothing wrong,” Joseph emphatically states. “It is the woman who should have known when she was safe from getting pregnant.”

But this seemingly misogynous traditions seem to be slowly fading with a higher increase in girl education than was seen over the past 10 years. While many young men are out raiding and hunting, the young ladies are getting an education. Knowledge that they are using in the nearby clinic, the Samburu game reserve as well as the lodges and tented camps within.

We were honoured to enter one of the manyattas which provided the much needed cool in the hot Samburu sun. The manyattas are actually bigger than they look from the outside, being able to comfortably house a living room, kitchen and sleeping quarters. Our crew of 10 was able to just sit on the leather skin mats and take in the cool air.

While for the longest time cow dung was used to build them, now anything that can build is used. From the plastic bags and bottles to box cartons, the women have learnt to take advantage of the reusable trash.

The man of the house is supposed to sleep with his neck propped on the Norike, a three legged headrest. Meanwhile one hand is resting on his hunting knife or club, ready to rise in case of a threat to the family or the domestic animals outside.

For the polygamous family, each wife has her own manyatta and when the man wants to spend the night, the kids are sent off to a neighbor. In fact all it takes is a spear at the door for the kids to know that they are not wanted for the night. Way to protect the kids.

Away from the mayattas, some fit looking morans were waiting to demonstrate their fire making skills…literally.

With just an acacia twig, some soil to increase the friction and a whole lot of handy work, the moran gets started. Next to the twig is some dried dung which joseph informs us has to be donkey’s or elephants’ since they are non-ruminants. That means that their dung comprised of partially digested vegetation. Perfect for starting a fire.

And so the moran got to work, rubbing his palms furiously against the twig until there was smoke. A fellow moran was at hand to place the dried dung over the smouldering twig and blow on it. And if you were questioning modernization on this part of the country, a newspaper is added to the little flame culminating in an impressive fire.

Joseph took us round the village making a stop at one of the iconic spots, the parliament. The place where decisions are made, strategies are discussed and developed and punishments are metted. Every evening, the elders meet at this revered spot without fail. Unlike our ‘developed’ parliament, elders here actually discuss matters that concern community development and believe it or not, are not entitled to sitting allowances.

It is also here that the news is disseminated. Every morning a young man is sent out to collect news from the other villages and the surroundings. He will then come back and relay the message to the villagers

So how do the Samburu trade?

We were taken to their in-house market place where the women were all too eager to showcase their creations. Magnificent neckwear, bracelets, earpieces and even table pieces were on display. From as little as Sh200 to as much as Sh10,000, any buyer would be spoilt for choice.

But jewelry is not the only item up for trade. During the market days, the Samburu interact with different tribes as well and animals, wooden artefacts and even cloth material are traded. Barter trade is a dying form of exchange with many opting for hard cold money. 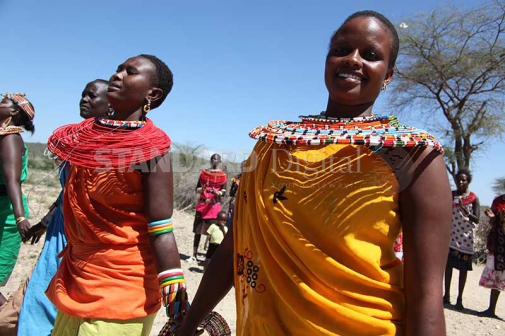 As we walk out of the village, we are escorted with song and dance. We feel their joy and sadness at the same time. Their own way of thanking us and wishing us well. We board our vehicles changed, touched and with a new found respect for tradition and culture. And pray that the modern world does not taint this community because that is the one thing that has kept the proud Samburu people strong.

The new look of Kisumu City to create millions of jobs

A woman has died of Ebola in Liberia, months after the West African nation was declared free of the deadly virus and weeks after neighboring Guinea also recorded a new flare-up, health officials said on Friday.

By Boniface Mithika | 15 hours ago

By Esther Muchene | 7 days ago

How to handle your travel expectations

By Peter Muiruri | 21 days ago