In total, the 18 billionaires from Africa in 2021 are worth $73.8 billion, an average of $4.1 billion each. Out of the 18, South Africa and Egypt have five each. Nigeria has three, including Aliko Dangote, the richest on the list. Morocco takes two while the remaining, though African-born, are residents or citizens of non-African countries. We take a critical look at what they all have in common, and the behind-the-scenes secrets to their success.

1. They have their finger in every pie

Billionaires have diversified portfolios. They definitely don't have a savings account sitting around with $1B in it. That's because inflation risk hurts the rich most of all. To keep their wealth from being worth less every year due to inflation, they need to put it to work by investing it, thereby earning more than inflation eats away.

A great example is South African business mogul Johann Rupert. He is the fourth richest African at a net worth of $7.2 billion on the Forbes list. He is chairman of Swiss luxury goods firm Compagnie Financiere Richemont, best known for the brands Cartier and Montblanc. However he does much more. Rupert entered into a 50/50 joint venture with Polo Ralph Lauren to form the Ralph Lauren Watch and Jewelry Company. Remgro, one of Rupert’s companies has some interesting brands like Nola Mayonnaise; Rainbow Chicken, which is a significant supplier of chicken to KFC in the country; Sunbake bread, which goes well with its Yum Yum peanut butter, their brand as well. Piemans pies; Selati sugar; Ouma rusks; Rama, Stork and Flora margarines; Bobtail, Catmor and Dogmor for your pets. This man almost owns South Africa, and that is not all. You like Hunter’s Dry and Savanna? They are few among many liquor brands that are owned by one of its investee companies, others are Three Ships Whisky, Durbanville Hills, Oude Meester, Amarula, Viceroy and Autumn Harvest. Remgro has shares in oil and gas company Total SA, interests in health insurance firms Discovery, Outsurance and Metropolitan, cabling solutions by Dark Fibre Africa and many more companies in South Africa and beyond.

2. They have interest in Telecoms

Forbes identifies billionaires from all over the most prominent economic sectors, including commodities, new technology, retail and finance. Telecoms entrepreneurs range across operators, ISPs and vendors from a variety of geographical markets.

Many billionaires on the list, made the crux of their money in the early 90s when mobiles first came onto the market and mobile phones were still a budding technology. Those who got into the mobile industry that early have been able to see the value of their investment grow in multiples.

Strive Masiyiwa is a good example. The Zimbabwean, launched a mobile phone network; the Econet Wireless Zimbabwe in 1998. Masiyiwa also owns just over half of private company Liquid Telecom, which provides fibre optic and satellite services to telecom firms across Africa. His other assets include stakes in mobile phone networks in Burundi and Lesotho, and investments in fintech and power distribution firms in Africa.

Mike Adenuga is much higher on the list at number four. His mobile phone network, Globacom, is the third largest operator in Nigeria, with 55 million subscribers making him the second richest Nigerian.

Naguib Sawiris, has a net worth of $3.2 billion and is the eighth richest billionaire in Africa. He built a fortune in telecom, selling Orascom Telecom in 2011 to Russian telecom firm VimpelCom (now Veon) in a multibillion-dollar transaction.

Othman Benjelloun and family, rank 15th on the list with a net worth of $1.3 billion. Othman Benjelloun is CEO of BMCE Bank of Africa. Through his holding company FinanceCom, he has a stake in the Moroccan arm of French telecom firm Orange.

3. They are all highly educated

Many billionaires on the list have a Bachelor of Arts/Science degree which is a four-year university undergraduate degree conferred by universities from countries including the US, Canada, the United Kingdom, New Zealand and Australia. Notably, almost all African billionaires studied abroad.

Don’t let the labels “arts” and “science” mislead you. Earning a Bachelor of Arts degree is one of the most effective ways to open doors to a wide variety of career options and advancement, from business and marketing to healthcare and technology and, even the fine arts, writing, or journalism.

The first three billionaires on the list, Aliko Dangote has a Bachelor of Arts/Science from Al-Azhar University, Nassef Sawiris has the same degree from University of Chicago and Nicky Oppenheimer has a Master of Arts/science from Oxford.

The second most popular qualification was one that’s heavy on numbers: business administration. Mike Adenuga, the oil tycoon, got an MBA at Pace University in New York, supporting himself as a student by working as a taxi driver. Koos Bekker, who ranks number 10 on the list with a net worth of $2.8 billion completed degrees at Stellenbosch University, in law and literature, and at Wits University, in law. He however went on to get an MBA from Columbia University, New York and an honorary Doctorate in Commerce from Stellenbosch University.

Mohamed Mansour who established General Motors dealerships in Egypt in 1975, later becoming one of GM’s biggest distributors worldwide, has an MBA from Auburn University. Aziz Akhannouch at number 12, and Youssef Mansour at number 14 also have MBAs. Johann Rupert is the only outlier, dropping out of university studying economics and company law to pursue business. All other 17 of the top 18 billionaires in Africa have a degree or Masters or both.

4. They understand the value of charity

Andrew Carnegie, the richest man in the world, wrote in 1889, “The problem of our age is the proper administration of wealth.” His solution to wealth inequality was to give away his millions as wisely as he could. Many of the African billionaires are philanthropists, giving away their wealth to causes they feel worthy.

Nassef Sawiris, 59, has a net worth of $8.5 billion. He is a scion of Egypt’s wealthiest family. A University of Chicago graduate, he donated $24.1 million to the school in 2019 to aid Egyptian students and fund an executive education programme.

Naseef's brother Naguib Sawiris has a net worth of $2.9 billion and owns Orascom Telecom. Back in 2015, he caught the world’s attention after offering to buy a Mediterranean island from Greece or Italy to house the world’s refugees. He was never granted his wish though.

Aliko Dangote, the founder of Africa’s biggest industrial conglomerate, Dangote Group, recently announced he would donate $1.2 billion to the Dangote Foundation to scale up support in education, health and youth empowerment. Patrice Motsepe, a South African mining magnate with a net worth of about $2.5 billion, has committed to give at least half of the funds generated from his family’s assets to improve the lives of poor and marginalised South Africans.

The secret to living is giving. Famous philanthropists make a big difference by giving back some of their wealth, and set an important example for their wide fan base. Additionally, through charity, they garner goodwill. And this goodwill inadvertently increases loyalty to their businesses.

The applicants are also seeking to have President Kenyatta’s Gazette notice that listed 34 judges for appointment declared null and void.

With no advanced training in ICT, Kamal Budhabhatti controls software industry in Africa and beyond.

By Gerald Mutethia | 1 hour ago 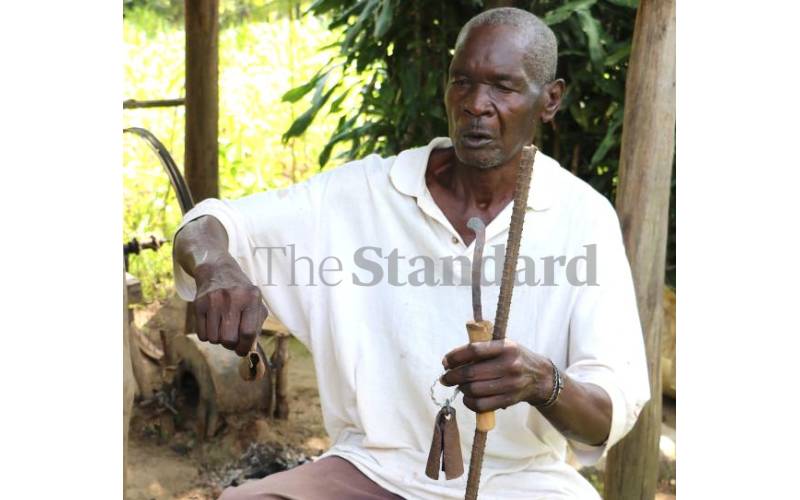 Blacksmith: Why some still cling onto the dying old trade

Overcoming the growth challenges I faced early in business
Feedback