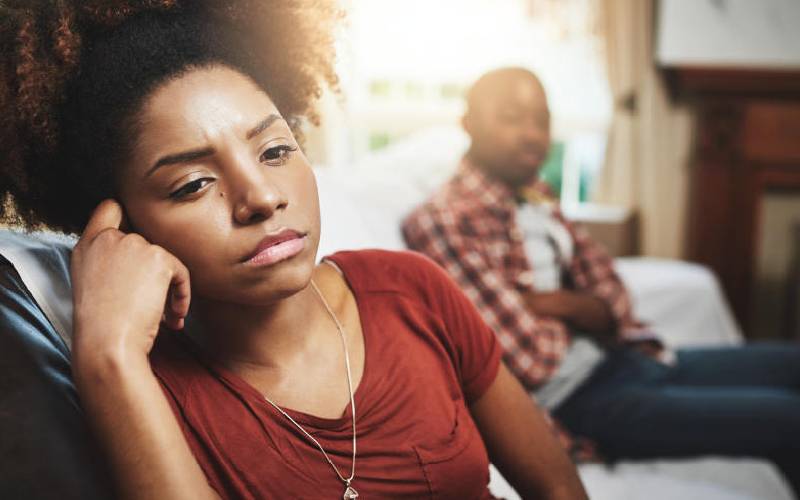 Tom Oloo, a public relations expert, began receiving the ‘silent treatment’ from his wife of seven years at the height of the lockdown. That was three months ago.

His suspicious wife snooped into his phone for evidence of philandering and confirmed her fears.

Upon confrontation, Oloo recalls; “I reacted angrily as she had no business going through my phone. She packed her bags and left, but returned two weeks later. From then on, she has refused to speak to me, but it doesn’t bother me because she isn’t the oxygen I breathe.”

Though Oloo has suffered previous sessions of his wife playing bubu game for a week, “this time, it’s like she wants to break the Guinness Book of Records, so let her have fun while at it.”

Besides allegations of infidelity, bubu game starts over a myriad of issues and situations: meeting an ex and appearing happy all day. Not responding to calls or texts. Making nasty comments especially about her looks or family. Forgetting birthdays and anniversaries. Sending less money than promised especially when the bakuli is hot on her head at the salon. Downplaying things considered important, like joking about fibroids. Not helping with children. Mistreating visitors especially in-laws.

“One, in particular, would go silent on me any time we had a misunderstanding. It didn’t even matter what it was about. If I raised an issue, he would say ‘Okay’ and then ‘Goodnight’, and then he would disappear. I used to ignore it at first, but it was a big challenge for me. I would get anxious and start to overthink everything, doubt my stand. I felt powerless like he was the only one, who got to decide when we spoke. And he was speaking with other people and not me. I hated it, and eventually, we went our separate ways.”

Dr Chris Hart, a psychologist and relationship guru, says the silent treatment is a form of passive-aggressive behaviour where one retreats instead of coming out and saying what’s bothering them.

D Hart refers to it as a ‘pink flag’ when two dates are starting out. “It’s habitual, and it develops early. If the couple doesn’t take active steps to address their issues in a healthy way, it can lead to a bigger problem” considering that if it happens in an established relationship or marriage, then silent treatment coming at the end of a cycle often spells doom.

Dr Hart reckons the best way of dealing with the silent treatment is looking your partner in the eye and talking things out as “it’s pointless to punish them for perceived slights; communicate about what’s bothering you and don’t make a habit of retreating into your shell. Healthy couples find a way to break the ice.”

Dr Hart, however, says there are some people who just sulk, and it’s not so much about punishment but rather them stepping away from the confrontation to process.

“In this case, you need to inform them that you acknowledge their withdrawal, and to encourage them to bring the issue up when they’re ready. In the meantime, get on with your life.”

Duncan Kemei, 27, an electronics dealer in Nairobi says he not a fan of confrontation and he avoids situations with unnecessary friction.

“It was a problem when I was younger. I dated one girl in campus who was the exact opposite in personality. She liked the drama, always wanted to argue and fight. It made her mad when I refused to engage. We got in so many fights about me refusing to fight with her,” recalls Kemei adding “she would accuse me of using the silent treatment to punish her, but the truth was that I just didn’t feel the need to fight about every little thing,” but over time, he got better at communicating.

“People who’ve been around me long enough know the silence is not about them, I just like to keep to myself,” he says.

Benjamin Zulu, a clinical psychologist and counsellor, says young couples are prone to the silent treatment since they are not emotionally mature and he warns those playing the field against dating anyone who’s 24 years or below.  A person who is younger still has the teenage or emotional brain. They’ll go silent on you for petty issues, because emotional issues are too heavy for them. The rational brain develops at 25, so it processes things better.”

Zulu adds: “For those dating and experiencing silent treatment they should not get married. Silent treatment is a dysfunctional way of solving issues. It’s okay to withdraw when you feel hurt to process, but you should report it. Don’t ghost your partner emotionally and leave them wondering what they did wrong.”

He adds that in marriages, silent treatment indicates the couple is growing apart and if it happens once or twice, couples should iron out things.

Zulu reckons silent treatment has the same effect as physical whipping since “when you’re ignored by the person you love, your brain experiences the same pain. It’s understandable to go silent. It can be a form of protest, but it’s not healthy. There is even a manipulative element to it. When you call out somebody on their bad behaviour and they go cold on you, they’re telling you never to challenge them again, even when they behave badly. That is abusive or manipulative, and when it happens, you should never be the one to apologize. Hold your ground until they come back.”

Zulu adds that silent treatment is a very passive-aggressive way of fighting. But the offender should make the first move, figure out how to make amends “unless it’s manipulative, in which case you shouldn’t come down because then you’re rewarding their behaviour, and it’s going to keep happening.”

In an event where the hurt is mutual, the more mature person should be the one to apologize. In the battle of egos, the first one to surrender is always the winner as it becomes “a very frustrating dance when you get upset and go silent, and then your partner also goes silent because you’re doing so, and the cycle continues. A relationship like this cannot progress.”