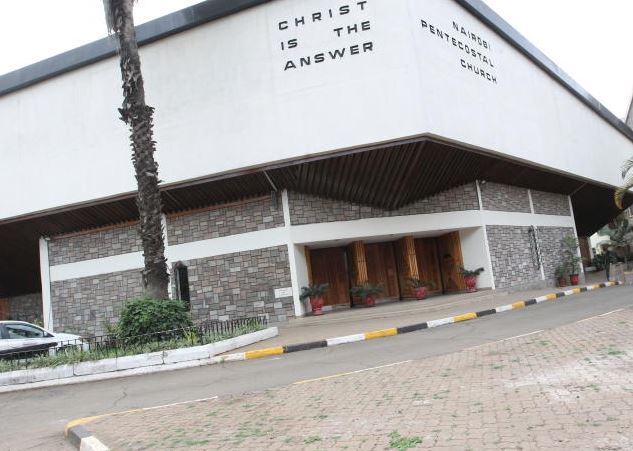 One sunny Sunday sometimes in 2008, an announcement was made at the Christ is The Answer Ministry (Citam), Valley Road branch (above), that sounded like a good deal.

A land-buying company had entered into an agreement with the church sacco to partner in acquiring land with the intention to help members become home owners.

Membership into the land-buying company was through membership in the sacco. At the time, it looked rather simple and like a match made in heaven.

The land-buying company, known as La Nyavu Gardens, was led by none other than Citam’s then presiding Bishop Boniface Adoyo and two other partners - Haron Nyakundi and Joyce Gikunda. These three were also officials in the church sacco.

The relationship between La Nyavu Gardens and La Nyavu Sacco was not just skin deep. A memorandum of understanding between the company and the sacco details the level of their entanglement.

Between 2008 and 2014, almost all the 431 plots on a 100-acre piece of land that was being sold to church members by La Nyavu Gardens were bought, with the sacco almost playing the role of broker. But there were signs of cracks and the buyers were unsettled.

Their land ownership journey seemed to be full of potholes that looked like they could swallow their home ownership dreams.

During the entire month of December 2009, La Nyavu Gardens and the promise of home ownership became a common fixture during church announcements not just at Citam Valley Road, but in many other sister churches.

Open days were held in the churches’ many compounds around the capital. And although La Nyavu Gardens had been registered as a separate entity, there was dedicated effort to paint it as being part of the church.

Documents and correspondence in our possession show that joining was pretty simple. First, those interested were required to become members of La Nyavu Sacco Ltd for a joining fee of Sh500.

Members were then required to make a formal application for allotment of the plots. The application form was sold for Sh2,000 to aspiring home owners. The tentative land-selling price for the first buyers averaged Sh400,000.

The prices, according to the documents that include sale agreements, were inclusive of government taxes, consultancy services, administrative charges as well as infrastructural costs. Like many other similar initiatives, it was based on a first-come-first-serve basis.

There were other costs, too. For example, Sh100,000 for provision of infrastructure and Sh35,000 as consultancy fees. The customers were also to foot the cost of transfer of lease at Sh16,840.

In 2010, the City Council of Nairobi gave its approval for the subdivision of the 100-acre piece of land into individual units for development. The development was to be known as Mwiki Court.

The more than 400 plots on the piece of land sold out quickly. A key enticement for many who purchased these parcels of land was the proposed conflict resolution mechanism.

But in the years that have followed the initial introduction of the project to the flock, disenchantment runs deep among the investors. Particularly after Citam publicly distanced itself from the project.

One of the key complaints by the owners over the years has been the incomplete registration process of their plots.

“The welfare committee is yet to receive any feedback regarding the same. The purchasers, having complied with the terms of the agreement for sale, are entitled to their duly registered titles. On behalf of these purchasers, we demand to know what has become of the titles to their parcels of land,” reads a letter written on May 29, 2020 by Mwiki Court officials to La Nyavu Gardens.

The residents also decry the lack of infrastructural development that was promised by the developer when they signed the sale agreements.

An approval from the defunct city council for the project seen by the Sunday Standard indicates that the project ought to have murram access roads, a comprehensive surface water drainage scheme as well as a perimeter wall. Most of these are invisible on site, although there is a partially completed perimeter wall.

Nyakundi speaks with the conviction of a man firmly rooted in his beliefs. His office in Nairobi’s Upper Hill area is littered with files. Nyakundi is not only a co-director in La Nyavu Gardens, but is also the Mwiki Court project manager.

“The project started in 2010 and, yes, it was mooted at NPC Valley Road,” he says. In fact, investigations show that as far back as 2004, the church sacco was already exploring ideas on how it could get into the real estate business.

A 2016 internal audit by the church following an inspection report by the Ministry of Cooperatives into the relationship between La Nyavu Gardens, the sacco and Citam shows just how entangled the three entities were.

The addition of a fourth ingredient - the investors - into the relationship could only further muddy the waters.

First, the investment company and the church sacco went by the same name - La Nyavu.

“In November 2007, some sacco leaders incorporated La Nyavu Gardens to act as the sacco’s investment arm,” the audit reads.

Nyakundi, Gikunda, and Adoyo became co-directors of La Nyavu Gardens Ltd. This blurred delineation of names, and roles were in later years to become a huge source of confrontation between the church, the sacco and the land owners.

Although the company and sacco were legally different, there were overlapping elements in the running of the two entities.

And this, Mwiki Court officials say, is why buyers believed from the word go that La Nyavu was part of the church. They now want the church to arbitrate in areas where they feel they have been short-changed.

But Nyakundi holds a different opinion. “We have never been part of Citam. We partnered with private people to form La Nyavu Gardens.”

In 2010, the Ministry of Cooperatives instituted an audit of the sacco. The results of the audit necessitated another internal audit by Citam whose findings, which were made public in 2016, threw the land-buying and development company under the bus.

“While the company was incorporated as a private company, it is apparent that the sacco leaders presented it as the sacco’s investment arm of Citam, as it was referred to in various minutes and documents. Operationally, the company was managed by Nyakundi, the sacco vice chairperson and the sacco accountants,” reads the Citam report on the dealings of La Nyavu Gardens and the sacco.

Before the internal audit was made public, Citam had already distanced itself from La Nyavu Gardens through advertisements in the local dailies.

In a five-point disclaimer, Citam explicitly said that La Nyavu Gardens had never been the business arm of the church, and that although the directors of the company were church members, they did not represent Citam.

Back in Mwiki, less than a dozen homes are in various stages of construction. Some have been completed and families have moved in.

Nyakundi has an explanation for this. He ruffles through dozens of records in his files.

“To date there are people who have not finished paying for their plots,” he says. “This resulted in cash flow issues with the project.”

He insists that although there have been some delays, the company remains committed to finishing the project.

“The agreements say we will provide a sub-leasing agreement. And we have done that.”

“The welfare committee and the previous oversight committee have both continuously attempted to engage, with meetings being called by you only for the purpose of issuing platitudes and unfulfilled promises,” a letter from the Mwiki Court officials reads.

But it is not just the push and pull between the land buyers, the church and the land-buying company that is intriguing about this case. The history of ownership of this prime piece of land is also interesting.

On April 24, 1970 a letter was dispatched from the office of the Registrar of Titles to the Lands ministry. The purpose of the letter was to indicate the ownership of a prime piece of land on the outskirts of the city.

“Know all men by these presents that in pursuance of a surrender as Number L.R 7206/13 the President of the Republic of Kenya hereby grants unto His Excellency Mzee Jomo Kenyatta of Post Office 530 Nairobi as natural guardian and trustee of Uhuru Muigai (hereafter called the Grantee) ALL that piece of land situated in the city of Nairobi in the Nairobi Area containing by measurement Forty decimal four seven (40.47) hectares of thereabouts…”

With this communication, the parcel of land was effectively transferred to President Jomo Kenyatta. Many such transfers at the time had a set of special conditions attached to them.

These could pertain to matters such as demarcation, change of user or caveats for usage that were to be strictly adhered to. In most cases, any violation of these conditions would automatically revert ownership of the land to the government.

President Kenyatta held the land in trust of his son Uhuru Kenyatta until he passed away in August of 1978, an event that transferred the management of his estate through a letter of administration to Mama Ngina Kenyatta and Uhuru’s elder brother Peter Muigai Kenyatta.

Decades later, on what turned out to be a busy day at the Land Registry with regard to this particular property, the administration of the estate was to change hands several times ending in it being owned by a private company.

First, the letter of administration granted to Mama Ngina and Muigai was presented. Next came Muigai’s death certificate that technically removed his name from administration of this particular estate.

After that, another letter of administration naming Kristina Wambui Pratt as a co-trustee to the estate was presented at Ardhi House before transfer of ownership from the two trustees to a company called Ropat Agencies was effected.